Cardinal Burke and the Francis Revolution 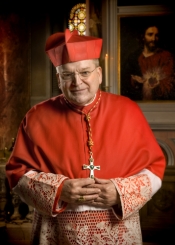 Editor's Note: Our friend, Father Z, has some interesting things to say about the impending demotion of Raymond Cardinal Burke to, as Sandro Magister puts it, "not… the prestigious see of Chicago, but rather... to the pompous – but ecclesiastically very modest – title of ‘cardinal patron’ of the Sovereign Military Order of Malta". If this happens, and as of this writing it remains unconfirmed but likely, it just may constitute the most insulting demotion of a high-ranking churchmen in history. Though Father Z seems mostly concerned about an overreaction to this news on the part of Traditionalists (Lord knows the Neo-Catholics never understimate the significance of these things), even he is struggling to find a way to sugarcoat this startling development. We’re grateful to our new columnist, Maegaera Erinyes, for providing a bit more insight into what is really going on with the Francis Revolution in Rome. MJM

What Fr. Z fails to mention is that it's not just Cardinal Burke. It has appeared for some time that the Vatican's canon law department has been the chosen dumping ground for the revolutionaries to send former Ratzingerians and their Trad-leaning ilk. To go to see Card. Burke at the Signatura, you don't go to the Vatican, you get on a bus across town to the Cancelleria, a beautiful old 15th century palazzo near the tourist meccas of the Campo di Fiori and Piazza Navona. On (what North Americans would call) the third floor, the Piano Nobile, you turn left at the top of the stairs and go knock on the big wooden door at the end of the hall.

To go see his Italian Ratzingerian counterpart at the Apostolic Penitenziare, Cardinal Mauro Piacenza, formerly head of the Congregation for Clergy - second in importance to Bishops - you turn right on the same floor. The two are down the hall from each other, and no doubt take their coffee together in the mornings.

(The other member of the Ratzi fan club in the Curia was Canizares, who is probably going to do better. I still suspect that he read the writing on the wall, and polished up his Frank-speak catchphrases - "I want to be closer to the sheep" - and got out while the getting was good.)

Now that this news about the much more famous (in the English speaking world) Cardinal Burke is getting around, I imagine it won't be long before we hear something similar in the Italian language press about Cardinal Piacenza's early retirement. It looks like the Cancelleria can be seen from now on as more of a way station. If you're bad (too Catholic) they'll send you across town. If you continue to be bad there, you're out.

Published in Fetzen Fliegen
back to top
Last modified on Wednesday, September 17, 2014
Tweet
More in this category: « Meriam Ibrahim: Miraculous Medal or Not? What Cardinal Dolan Can Learn From the First American Bishop »