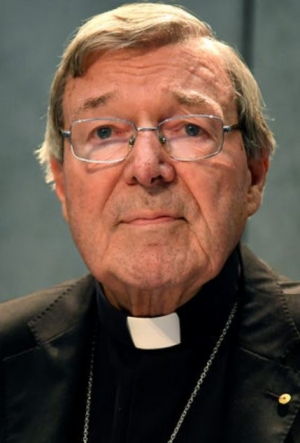 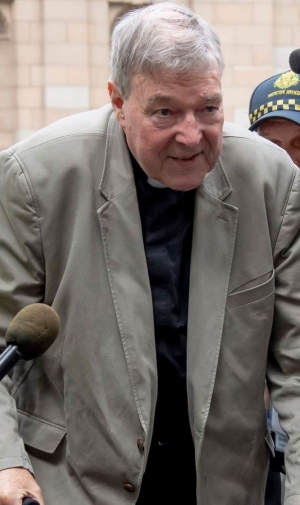 Australian Catholics were devastated to learn today that the appeal by George Cardinal Pell against his conviction of child sexual abuse was dismissed.

Australia’s highest-ranking prelate has been in prison since March, following his conviction in Victoria’s Magistrate’s Court. He appealed the conviction in June, and since then has been waiting to hear the judge’s verdict, while spending 23 hours a day in solitary confinement and prohibited from saying Mass.

Cardinal Pell’s supporters had been quietly confident that today's’ decision would go in his favour, since his conviction relied on the testimony of a single witness and the defence had identified multiple logistical obstacles which made the alleged offences practically impossible.

The panel of three Supreme Court judges was split in the decision, two to one, with the dissenting Justice Weinberg stating that he has ‘genuine doubt as to the applicant’s guilt.’ Weinberg wrote in his conclusion that:

The prosecution had to prove the applicant’s guilt beyond reasonable doubt. The defence had to prove nothing at all. It did, however, point to a substantial body of evidence that, it submitted, left open at least the ‘reasonable possibility’ that the complainant’s allegations fell short of the standard of proof required for conviction.” 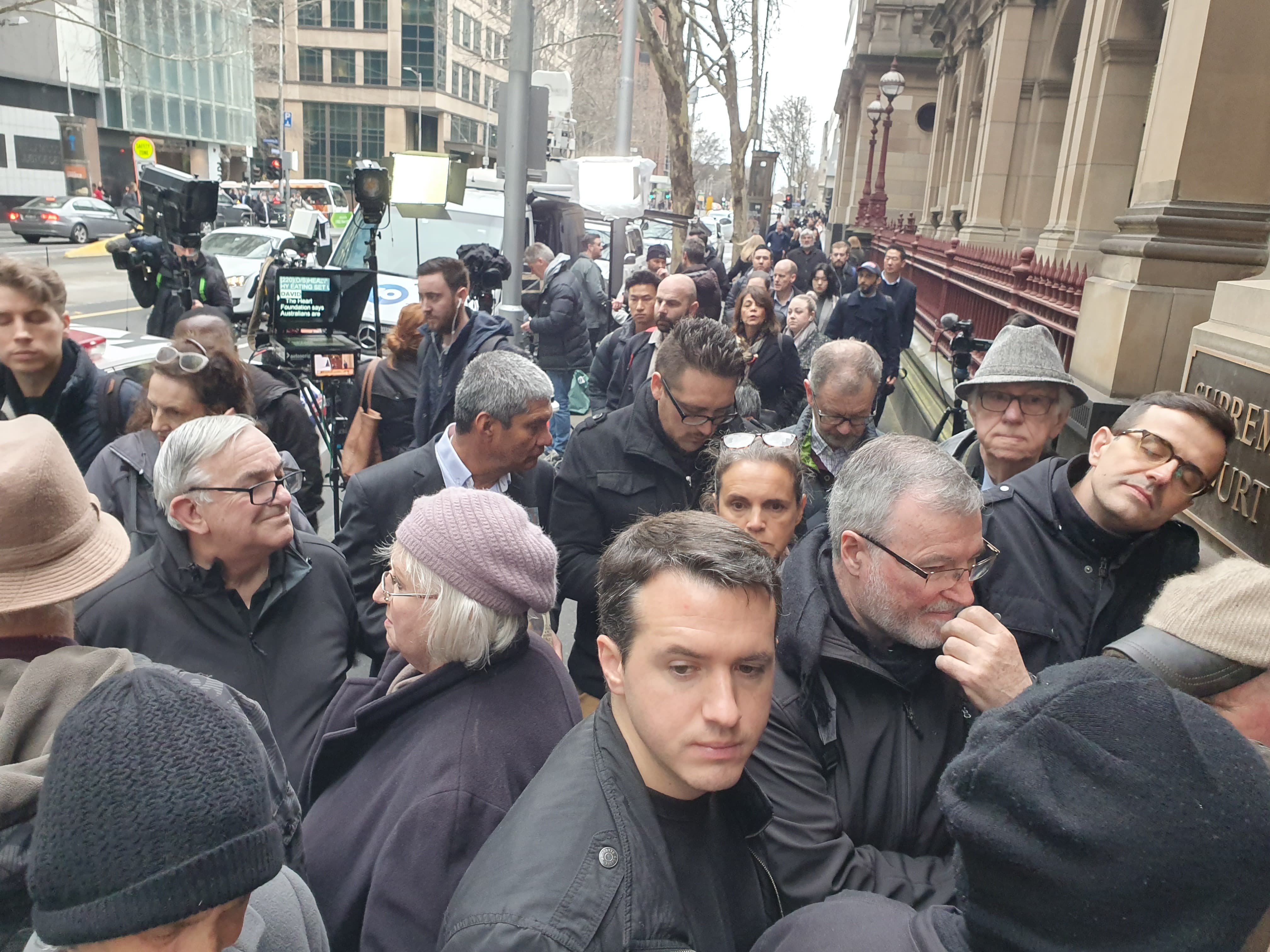 Pell's supporters await the verdict outside the courthouse

He concluded that there is "a ‘significant possibility’ that the applicant in this case may not have committed these offences,” and that he “cannot, in good conscience, do other than to maintain [his] dissent."

Cardinal Pell’s legal team now has 28 days in which to lodge a Special Leave Application in the High Court, Australia’s highest court of appeal. However, the High Court judges are under no obligation to accept the application.

The case has been called a ‘witch hunt’ by secular, conservative reporter Andrew Bolt; and former Immigration Minister and self-proclaimed agnostic, Amanda Vanstone, has always upheld the Cardinal’s innocence.

The consistently and unashamedly pro-life Archbishop Anthony Fisher of Sydney released a balanced statement that shows guarded support for the Cardinal:

Cardinal Pell continues to (maintain his innocence) notwithstanding today’s decision. Today’s split decision amongst the judges is consistent with the differing views of the juries in the first and second trials, as well as the divided opinion amongst legal commentators and the general public.”[1]

Some of the Cardinal’s confreres - those who are firmly in the Church of Dialogue camp -  are less enthusiastic about his innocence  and were careful to weight the bulk of their statements with concern for the victims: this is legitimate of course, but not if it comes at the cost of allowing for an unjust verdict against the man whom they know held the Australian Church together for decades.

Archbishop Coleridge, president of the Australian Catholic Bishops Conference, said that “…the Catholic Bishops of Australia believe all Australians must be equal under the law and accept today’s judgement accordingly.”[2] As if the good Cardinal ever had a hope of being treated equally!

Bishop Vincent Long stated that “We must respect that decision and process of law.”[3] Peter Comonsoli, Archbishop of Melbourne, released a statement [4] saying, “I respectfully receive the court’s decision and I encourage everyone to do the same.” In a similar vein,  the Vatican issued this non-statement[5]:

While reiterating its respect for the Australian judicial system, as stated on 26 February after the first instance verdict was announced, the Holy See acknowledges the court’s decision to dismiss Cardinal Pell’s appeal.

As the proceedings continue to develop, the Holy See recalls that the Cardinal has always maintained his innocence throughout the judicial process and that it is his right to appeal to the High Court.

At this time, together with the Church in Australia, the Holy See confirms its closeness to the victims of sexual abuse and its commitment to pursue, through the competent ecclesiastical authorities, those members of the clergy who commit such abuse.

VicPol and the anti-Justice League

Paul Colitis in Quadrant[6] issued a scathing attack on Victoria’s Police Department, which chronicles years of corruption evidenced in cases like Lawyer X, the Gillard coverup and the Black Saturday bushfire debacle. He writes:

…the Victorian police force has been a nest of corruption, bungling incompetence, sharp practice, pathetic and indeed dangerous political correctness, the selective pursuit of the guilty and the harassment of the innocent, leaking like a colander and wasting precious public resources, for almost as long as anyone can remember. They are simply all over the place."

However, Colitis writes that the conspiracy to indict Cardinal Pell is a group effort:

… at least some of whom have been shown to have been interacting, over a long time.  They include participants in two Royal Commissions (seemingly obsessed with the Catholic Church and with Pell), the Australian Broadcasting Corporation, its journalist Louise Milligan, the Fairfax (now Nine) press, Julia Gillard and her Emily’s List mate Vivian Waller, anti-Pell forces in  Rome, the leading lights in the emerging sex abuse victim industry, their lawyers, long time gay Pell haters in the media like David Marr and last, but by no means least, and appallingly, the Victoria Police.”

No article related to injustices found in Victoria’s judicial system would be complete without reference to the widespread Freemasonic influence in that state’s police department; after all, Victoria’s former Assistant police commissioner, Vaughan Werner was also a Masonic Grand Master. And Masonic influence is not limited to the state of Victoria: former NSW police commissioner, Tony Later, was at one time Grand Master of the NSW/ACT Freemasons.

One Catholic friend tells the story of his attempt to join the police force a couple of years ago. As he sat for his entrance test in an exam room with around 30 other potential recruits, he noticed that several of the hopefuls conspicuously sported the Masonic symbols of square and compass in the forms of lapel pins, badges and necklaces. One of those hopefuls, a young man in his late ’20’s, said that he’d been a member of the Freemasons for some time. Presumably, the applicants wearing Masonic insignia had heard that it would help them with their prospects in VicPol.

Once they are safely ensconced within  the Police Department, Masons have the chance to join the Victoria Police Unanimity Club, which is open to Freemasons who are serving or past members of VicPol and also to members from police forces outside Victoria and even from overseas. The club was formed in 1946 and was the centre of controversy two years later when the Victorian Parliament was alerted to the existence of a Communist cell, known as the Unanimity Club, operating within the Victorian Police Department. The government then  launched an enquiry which was abruptly closed when it became known that the Club was comprised of Freemasons.

On July 25th of this year, I wrote to Cardinal Pell, asking him for a special favour: that he would reply in the form of a pastoral letter which could be distributed to the faithful. I wrote that:

“Many are very confused about what is happening in the Church, and we are at the point where the most faithful are being accused of fomenting schism, while the most heretical are promoted and lauded. Just the act of voicing concern can draw criticism from both quarters.”

It was a somewhat audacious request, but one borne of hope and in acknowledgement of the seriousness of our times. I had no idea if it would be answered, or in what way.

On August 9th, I received his reply, a pastoral letter which was quickly disseminated to the ends of the earth and which has brought encouragement to thousands of confused Catholics, many of whom had been feeling abandoned by their shepherds. So many had been asking for a bishop to stand up and voice their concerns; God heard our pleas and went one better, giving us instead the voice of a Cardinal .

With its strong emphasis on Apostolic tradition and the conspicuous absence of buzzwords such as ‘dialogue’ and ‘inclusion’, the Cardinal’s letter was a breath of fresh air, particularly for Australian Catholics who are feeling the noose of Modernism tightening in the leadup to the Plenary Council in 2020.[7]

Fortunately, our dear Cardinal has also provided a model of conduct for this time of apostasy, persecution and suffering.  From his pastoral letter:

My faith in Our Lord, like yours, is a source of strength. The knowledge that my small suffering can be used for good purposes through being joined to Jesus’ suffering gives me purpose and direction. Challenges and problems in Church life should be confronted in a similar spirit of faith.

It might be many days before Catholics can remove Allegri’s Miserere from their music players. Until then, may the cry of the angel be ever in our ears: “Penance, penance, penance!”, as we strive to make reparations for the immorality and corruption that is issuing from our Church and tainting the world.

And may God strengthen and bless His Eminence, George Cardinal Pell.