New from The Remnant Underground... 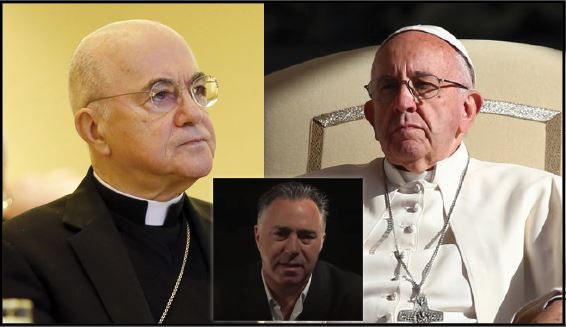 Just before Season 6 of The Remnant Underground gets underway, Michael Matt checks in from the set of a new RTV program to comment on the 'scandal of the century'--credible charges leveled by a Vatican diplomat against top authorities in the Church--including Pope Francis--alleging an orchestrated cover-up for the sexual pervert and now-disgraced Theodore Cardinal McCarrick. While Francis refuses to answer the charges and neo-Catholics attempt to 'shoot the messenger', Michael asks the questions: What are they so afraid of? Why are they trying to block a formal investigation of these credible accusations? What are they trying to hide, and for how long have they been trying to put one over on the Catholic people?

At this pivotal moment in the history of the post-conciliar debacle, isn't it time for all Catholics to come together and put these Modernist occupiers of the Catholic Church on trial? With ten Cardinals, Archbishops and Bishops calling for a fair hearing and full investigation of Archbishop Viganò’s charges, isn't it high time Catholics connect the dots between this horrific development and the entire failed experiment of Vatican II?

[Comment Guidelines - Click to view]
The Remnant values the comments and input of our visitors. It’s no secret, however, that trolls exist, and trolls can do a lot of damage to a brand. Therefore, our comments are heavily monitored 24/7 by Remnant moderators around the country.  They have been instructed to remove demeaning, hostile, needlessly combative, racist, Christophobic comments, and streams not related to the storyline. Multiple comments from one person under a story are also discouraged. Capitalized sentences or comments will be removed (Internet shouting).
The Remnant comments sections are not designed for frequent personal blogging, on-going debates or theological or other disputes between commenters. Please understand that we pay our writers to defend The Remnant’s editorial positions. We thus acknowledge no moral obligation whatsoever to allow anyone and everyone to try to undermine our editorial policy and create a general nuisance on our website.  Therefore, Remnant moderators reserve the right to edit or remove comments, and comments do not necessarily represent the views of The Remnant.
back to top
Last modified on Sunday, September 2, 2018
Tweet