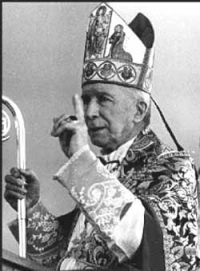 Archbishop Marcel Lefebvre: Saint or Schismatic?
Editor’s Note: Over the years since 1988, The Remnant has featured countless debates on the question of the SSPX “schism” and/or irregular canonical status. We have friends and allies on both sides of that divide, and, let’s face it, the complexities of the question are not easily unraveled even by canon lawyers, which is why there are many canon lawyers on both sides of the aisle. Where we’ve drawn the line in terms of publishing this debate is at those who seem disposed to willfully defend predetermined conclusions while consciously ignoring the facts that don’t fit their nice and neat little narrative. So, for example, those who insist on castigating the SSPX as formally “schismatic” even after heads of the CDF in Rome have clearly stated otherwise are, in our opinion, ideologically driven to grind the axe of their own pet peeve, and thus contribute nothing to the debate. Similarly, those in the SSPX who obstinately adhere to 1988 talking points about the FSSP, for example, poised to begin offering the New Mass and give enthusiastic across-the-board approval to the whole warp and disastrous woof of the Second Vatican Council, while ignoring the mountains of real-world evidence to the contrary are, in our opinion, counterproductive to serious debate as well. Mr. Achbold’s approach, on the other hand, is that of serious Catholics on both sides who are trying to uncover and then defend the truth. He may not  agree with important elements of the SSPX’s argument where jurisdiction is concerned, and yet the following article is an example of the fair, balanced and thus constructive discussion we at The Remnant have sought to promote and encourage for 25 years, even if and when it may depart in one way or another from our own editorial policy and opinion. Our thanks to Mr. Archbold for a fine example of the noble effort to cut through the inflammatory rhetoric on both sides and thus be part of the solution rather than the problem where the complex question of the SSPX is concerned. MJM


Generally, there are two groups that frequently criticize the SSPX in the most unflattering terms. The first group is unsurprising. They are Catholics who have fully embraced the hermeneutic of discontinuity. Some of these are the outright progressives in the Church who are determined to change the Church’s teaching on the critical pelvic topics, and generally deny the existence of hell and any real concept of sin. For them, the Church started for real in 1965 and just about everything that came before that, including all manner of doctrine, worship, and piety is rejected as part of the Church’s dark ages. These are the full-on hermeneutic of discontinuity folks. They exist within the Church in a state of pleasant comfortableness generally referred to as “full communion”. In their wake, they carry with them a whole bunch of people who don’t put as much rebellious thought into it as the above, but pay no attention to whatever happened in the Church before they happened along into it, mindlessly accepting the old church/new church dichotomy. These are the practical hermeneutic of discontinuity folks. They generally hold many heterodox positions, but nobody in the hierarchy of the Church seems to mind much. Again, they are comfortably numb in full communion. It should come as no surprise that these folks regularly ridicule and lambast the SSPX, as they hold all the Church’s perennial teaching, worship, and piety in disdain or indifference.

But another more surprising group regularly engages in vehement criticism of the SSPX. These are Catholics who embrace the hermeneutic of continuity. They understand that the Church is 2,000 years old and cannot ever contradict her own teaching, that proper worship is critically important, and regularly pray with beads in a pre-1965 manner.

In fairness, many of these Catholics looked upon the 1988 episcopal consecrations without papal mandate of Archbishop Lefebvre as a grave act of disobedience and a “schismatic act.” Whether or not you accept Archbishop Lefebvre’s justification for the act, one must recognize the great danger to unity that this act engendered.

Before I move on, let me be clear that I have never assisted mass at an SSPX chapel. In the pre-Summorum Pontificum days, I would travel 50 miles to attend the diocesan-approved Ecclesia Dei Traditional Latin mass even though the SSPX had a chapel just minutes from my home. I was and am that concerned about unity and obedience.

At the same time, it does nothing to diminish the seriousness of Archbishop Lefebvre’s actions to acknowledge that I would likely not even have had the option of a diocesan-approved traditional mass were it not for Archbishop Lefebvre and the SSPX. In fact, there might not have even been an SSPX hadn’t the Church in large part acted most ungenerously toward those rightfully attached to tradition and in a way contrary to the truth expressed in Pope Benedict’s letter accompanying Summorum Pontificum that, “What earlier generations held as sacred, remains sacred and great for us too, and it cannot be all of a sudden entirely forbidden or even considered harmful.” and that the “[1962] Missal was never juridically abrogated and, consequently, in principle, was always permitted.”

Want more Patrick Archbold? This article appeared in the last print edition of The Remnant. Subscribe today and never miss another column by Patrick Archbold.
Further, it is almost undoubtedly true that we would not have had Summorum Pontificum were it not for the stalwartness SSPX and the intransigent and ungenerous response of most Bishop’s to Pope St. John Paul’s call for a “generous response of Bishops towards the “legitimate aspirations” of the faithful.”

Yet, as a consequence of episcopal consecrations, Pope John Paull II excommunicated Archbishop Lefebvre and the four new Bishops. For years, many hermeneutic of continuity type Catholics cited this excommunication as the principle or sole reason to view the entirety of the SSPX in schism, even though the Church herself never formally declared them to be so.

But this is all a moot point now as Pope Benedict lifted these excommunications in 2009. All that remains is for the Church to grant the SSPX a proper canonical standing.   In no way do I wish to minimize the seriousness of the situation the SSPX is currently in or the necessity of proper faculties for distribution of the sacraments. But yet, among many Catholics who embrace the hermeneutic of continuity, their vehemence in declaring the SSPX in schism has remained and in some cases increased.   But only doctrinal issues remain unresolved before the SSPX preventing proper canonical standing.

But among those who thoroughly embrace a hermeneutic of continuity we continue to see a sweaty vehemence among some declaring the SSPX in schism. With the excommunications lifted, they declare the “doctrinal issues” between the Church and the SSPX to now be the great divide.

All acknowledge a divide between the SSPX and the Church on how to express the immutable truths declared by the Church. Yet, truth requires context.

The SSPX acknowledge the Second Vatican Council as a legitimate council. They also agree that large parts of the documents of Vatican II fairly state perennial Catholic teaching. But there are certain documents and certain parts of documents that do not obviously express continuous Catholic teaching, particularly in the areas of ecumenism, religious liberty, and collegiality.

Implicitly acknowledged by all who promote a “hermeneutic of continuity” is that the Council’s writings do not obviously or easily reconcile with prior magisterium on these topics. Otherwise, why would promotion of such a hermeneutical lens even be necessary?

The hermeneutic of continuity calls on us to understand any of these confusing statements in a way consistent with all the prior magisterium Council on these topics.

Any fair-minded person must admit that the Society’s positions on the topics of ecumenism, religious liberty, and collegiality at any time prior to 1960 were completely humdrum and uncontroversial restatements of obvious Catholic teaching. Is it possible a humdrum and uncontroversial statement of immutable teaching in 1960 is now controversial and even heretical in 1970 or 2015? How can we promote a hermeneutic of continuity on the one hand and on the other say that a formerly fine presentation of Catholic teaching (within living memory of many) should now be forbidden and considered harmful or even heretical?

It seems to me that you cannot have it both ways. You cannot truly accept a hermeneutic of continuity and consider such views as harmful or heretical. It also suggests that the doctrinal problems that currently prevent canonical recognition are not entirely on the side of the society. Clearly, the Church needs to work through some issues herself.

None of this minimizes the seriousness of the canonical situation of the Society or seeks to justify every statement or action of the SSPX. Yet, I think it makes clear that truth is not served by referring to the SSPX as heretical and thus obviously in schism, for to do so is to embrace a hermeneutic of rupture.

[Comment Guidelines - Click to view]
The Remnant values the comments and input of our visitors. It’s no secret, however, that trolls exist, and trolls can do a lot of damage to a brand. Therefore, our comments are heavily monitored 24/7 by Remnant moderators around the country.  They have been instructed to remove demeaning, hostile, needlessly combative, racist, Christophobic comments, and streams not related to the storyline. Multiple comments from one person under a story are also discouraged. Capitalized sentences or comments will be removed (Internet shouting).
The Remnant comments sections are not designed for frequent personal blogging, on-going debates or theological or other disputes between commenters. Please understand that we pay our writers to defend The Remnant’s editorial positions. We thus acknowledge no moral obligation whatsoever to allow anyone and everyone to try to undermine our editorial policy and create a general nuisance on our website.  Therefore, Remnant moderators reserve the right to edit or remove comments, and comments do not necessarily represent the views of The Remnant.
back to top
Last modified on Thursday, June 4, 2015
Tweet

More in this category: « Home from Pilgrimage, Hope for the World Post-Traumatic Stress Disorder and the Catholic Traditionalist »