Storm Clouds Over the Vatican: Has the Battle Begun? 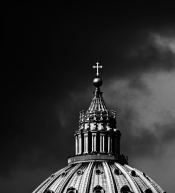 Within a single week, we experienced two great shocks, but I am unsure which one was greater. The first, of course, was the stunning defeat of the virulently anti-Christian presidential candidate (there is no other way to put it). Hillary’s stunning loss to Donald Trump gave many Christians an unexpected sigh of relief. It isn’t necessarily that they have great faith in Trump, although some do, but that they stepped back from the brink of the abyss that would have been Hillary’s term.

But as my jaw was still smarting from hitting the floor and the air from my long gasp of relief still escaping my lungs, I woke up one morning to a greater surprise. Four Cardinals had sent a letter to the Pope asking him to clear up the purposeful confusion of Amoris Laetitia.

In this petition for clarity, the Cardinals posed five questions to the Pope about the interpretation and results of that horrible document. By doing so, the four Cardinals put the Pope in a box. Answer the questions truthfully to his desire and the Pope declares himself a heretic. Answer them per the constant teaching of the Church and undo all the constructive chaos caused by the document. Well, the Pope decided he wouldn’t do either of these things and just ignored them, hoping they would just go away. And here is the real shocker. They didn’t go away. They went to work.

Having received no response from the Pope, the four Cardinals made the almost eight-week-old letter public. Step two of a two-thousand-year-old process defined in Matthew 18.

But if thy brother shall offend against thee, go, and rebuke him between thee and him alone. If he shall hear thee, thou shalt gain thy brother.

And if he will not hear thee, take with thee one or two more: that in the mouth of two or three witnesses every word may stand.

Moreover, Cardinal Burke, not someone prone to public bravado or grandiose threats followed up the release of the letter by giving an interview in which he said that if the letter remains ignored, the Pope forces the faithful Cardinals to issue a formal correction of the Pope.

This is where things really begin to get interesting. By no means am I an expert on the multi-step canonical process for a council declaring a Pope to be a heretic and has therefore deposed himself, but I know this looks an awful lot like it. Don’t get me wrong, I have no expectation that the process begun by these four brave Cardinals will lead there, but it raises some interesting questions about what happens next.

This article appeared in a recent print/e-edition of The Remnant. Why not subscribe today, and never miss another great Remnant article.

I suspect that the possibility that the Pope will answer the Cardinals approaches zero. As mentioned above, he and his reformation project are doomed either way if he answers. What I expect now is a full out assault on the four Cardinals by every rung Francis sycophant. “It is just four Cardinals. They are precisely the rigid mercy haters that the Pope has been warning us about.” This also puts into context some of the Pope’s screeds of late, doesn’t it? But that will be the refrain, it is just four rigid Cardinals who can’t let go of the past. Ignore them.

And guess, what? If it is just four Cardinals again, that is precisely what will happen. They will be ignored. So here is an interesting possibility. Just these 4 Cardinals signed the questions to the Pope because they are already well known for their stubborn adherence to the Catholic faith, and to protect those other faithful Cardinals and Bishops from these attacks until the time is right. But what if the letter is ignored and the correction comes as promised and that has the signatures of 25 Cardinals and 100 Bishops? I don’t think even this Pope and his cronies could ignore such a grand show of good ol’ fashioned Catholicism.

So, then imagine the situation that would face the Pope. Retract his heretical assertions and interpretations of AL and undo all his work and his legacy? Or does he fall on his sword to protect the terrible progress he believes he has made and resign the papacy rather than face censure, confident that he has enough loyalists to elect Pope Francis II as his successor? What is more important to the Pope, his papacy or his legacy?

So, this brings me back to my one predominant question in analyzing all this. Has the battle begun? Have we just witnessed the opening volley of the battle to take back the Church? It would certainly be nice to think so, but I am not getting my hopes up just yet. In my mind, it all depends on how many Cardinals and Bishops are willing to sign their names to the formal correction. Then and only then will we know what remains of the hierarchy of the Catholic Church, whether there are any generals left beside the four. I remain skeptical. But so many other things are happening right now that I thought could not possibly happen that, against my better judgment, I have hope. Hope is a dangerous thing. ■

[Comment Guidelines - Click to view]
The Remnant values the comments and input of our visitors. It’s no secret, however, that trolls exist, and trolls can do a lot of damage to a brand. Therefore, our comments are heavily monitored 24/7 by Remnant moderators around the country.  They have been instructed to remove demeaning, hostile, needlessly combative, racist, Christophobic comments, and streams not related to the storyline. Multiple comments from one person under a story are also discouraged. Capitalized sentences or comments will be removed (Internet shouting).
The Remnant comments sections are not designed for frequent personal blogging, on-going debates or theological or other disputes between commenters. Please understand that we pay our writers to defend The Remnant’s editorial positions. We thus acknowledge no moral obligation whatsoever to allow anyone and everyone to try to undermine our editorial policy and create a general nuisance on our website.  Therefore, Remnant moderators reserve the right to edit or remove comments, and comments do not necessarily represent the views of The Remnant.
back to top
Read 13325 times
Tweet

More in this category: « Don Vito to the Four Cardinals: Your red hats will sleep with the fishes Can the Church Judge a Heretical Pope? »