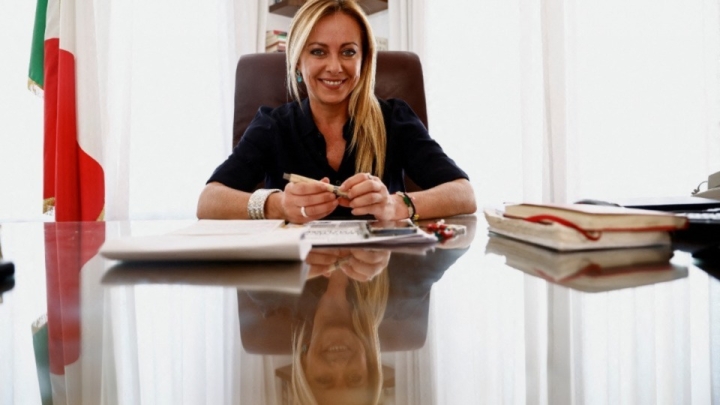 Giorgia Meloni, leading the conservative Brothers of Italy party, won the Italian national election on Sunday and is expected to form a coalition government with the right-leaning Forza Italia party led by Silvio Berlusconi and the League party led by Matteo Salvini.

She is Italy's first female Prime Minister. Ecstatic Romans tore down the European Union flag at the EU's headquarters in Rome and replaced it with the Italian standard. Conservatism has won BIG in Italy.

PM Giorgia Meloni campaigned on her identity as "Woman, Christian, Italian, Mother." With this she defies leftist ideology, which she claims seeks to tear down familial identity and national roots in order to create "perfect slaves... just numbers" for international organizations.

She said that her party stands “against global leftist forces” and will defend "God, country and family".

Below is her powerful speech against the woke ideology that threatens the whole world:

I’ve never heard any politician so perfectly explain what we’re up against and why we fight.

When you watch this video, you’ll quickly realize why the establishment is afraid of her.
pic.twitter.com/CswR8o3mjg

Latest from RTV — NATIONS ANNIHILATED! Is The Great Reset Worth World War III?

[Comment Guidelines - Click to view]
The Remnant values the comments and input of our visitors. It’s no secret, however, that trolls exist, and trolls can do a lot of damage to a brand. Therefore, our comments are heavily monitored 24/7 by Remnant moderators around the country.  They have been instructed to remove demeaning, hostile, needlessly combative, racist, Christophobic comments, and streams not related to the storyline. Multiple comments from one person under a story are also discouraged. Capitalized sentences or comments will be removed (Internet shouting).
The Remnant comments sections are not designed for frequent personal blogging, on-going debates or theological or other disputes between commenters. Please understand that we pay our writers to defend The Remnant’s editorial positions. We thus acknowledge no moral obligation whatsoever to allow anyone and everyone to try to undermine our editorial policy and create a general nuisance on our website.  Therefore, Remnant moderators reserve the right to edit or remove comments, and comments do not necessarily represent the views of The Remnant.
back to top
Last modified on Monday, September 26, 2022
Tweet