The New World Order makes an example of Djokovic 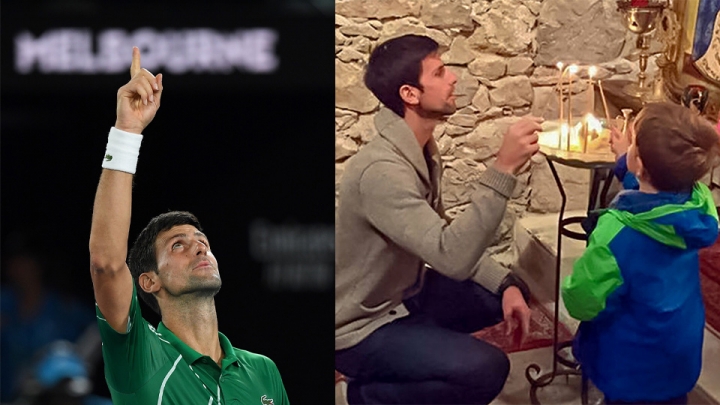 Question: If you were a globalist overlord who was trying to drum up support for an international digital passport, how would you engage the entire world without giving your game away?

The Australian government’s ridiculous treatment of tennis champion, Novak Djokovic, shows the extent of its willingness to further the globalist agenda. No matter how absurd, illogical or embarrassing a policy may be for a nation’s reputation, it will be implemented forthwith if it serves the needs of the New World Order.

The Australian government’s ridiculous treatment of tennis champion, Novak Djokovic, shows the extent of its willingness to further the globalist agenda.

Forget for a moment that Djokovic was able to enter Australia last year before a “vaccine” was available -  and that he went on to win the tournament. Never mind that other tennis players like Jeremy Chardy and Nikoloz Basilashvili are experiencing serious health issues due to the gene serum. And ignore how highly Djokovic thinks of Australia  - he once donated AUS$25,000 to communities affected by bushfires. None of that matters as long as there is a narrative to be supported and that narrative is the need for a universal set of health regulations: stage one of a global digital passport.

The media campaign to paint Djokovic as an “anti-vaxxer” began early last year, when he stated that he was unsure as to whether he wanted to submit himself to an experimental vaccine. Although he has never announced his vaccination status, Djokovic has publicly reiterated on several occasions that he is against vaccine mandates, particularly in order to travel. Media outlets continued to follow his attempts to enter the country without having to disclose his vaccine status, and finally, after months of uncertainty, an exemption made it possible.

So it was that Djokovic arrived in Australia last Wednesday evening with his exemption, two weeks before the start of the Australian Open that he hoped to win for the tenth time. The exemption was based on the fact that Djokovic had contracted COVID during the previous six months, however, while that exemption is admissible in parts of Europe, it turns out that this is not valid in Australia. So as soon as Djokovic set foot on Australian soil, he was detained by Border Force and his visa was cancelled. According to media reports, Djokovic was then subjected to an interrogation that lasted more than nine hours: his flight had arrived at 11pm, and there was still no clarity on the situation by morning.

So as soon as Djokovic set foot on Australian soil, he was detained by Border Force and his visa was cancelled.

In the meantime, Djokovic’s legal team applied for and was granted an injunction on his deportation, in the hopes that the matter could be clarified and that he would be allowed to play in the Australian Open. Permission was given for Djokovic to remain in Australia for another three days, albeit detained in a budget hotel which also houses refugees. Protesters have been gathering outside the hotel for days, drawing attention to the plight of both Djokovic and the refugees that are being detained inside.

According to his father, Srdjan, Djokovic is not in detention, he’s “in prison,” left without his wallet or even a change of clothes. The hotel food is apparently inedible and Djokovic has been denied access to his personal chef. Srjdan Djokovic has referred to the Australian authorities as “idiots”, and in one report, compared his son’s treatment to the Passion of Our Lord.[1]

Before the advent of COVID, the Australian government was already known for its targeting of political activists by detaining them or revoking their visas. International speakers such as the American pro life activist Troy Newman, Canadian conservative Lauren Southern and the anti-vaccine campaigner Kent Heckenlively have received illogical and unjust treatment from Australian authorities. But the controversy centred around Djokovic’s entry has garnered unprecedented attention from the media and foreign governments.

The Serbian Foreign Ministry has become involved with that country’s President describing the episode as a “political persecution.”

The Serbian Foreign Ministry has become involved with that country’s President describing the episode as a “political persecution.” This escalation is being played down by Australia’s Home Affairs Minister, Karen Andrews, who has provided further clarity surrounding the permissions needed for overseas travellers to enter Australia.

According to Kennedy, there are two separate processes required for entry: Djokovic successfully applied for his visa, but failed to pass the distinct entry requirements. These stipulate that the only grounds on which a vaccination exemption can be granted is a medical contraindication to the COVID shots. To make matters worse, under Australian law, if Djokovic or any other players are denied visas, then they may not be able to re-enter the country for up to three years.

The Australian Prime Minister, Scott Morrison, faced the press to state that Djokovic will not be granted special treatment because of his status, and to remind the public, somewhat disingenuously,  that it is the responsibility of each traveller to carry the correct documentation. It goes without saying that a figure of Djokovic’s stature, who stands to gain so much from a successful entry into Australia, would hardly fail in following the visa process deliberately. The fact that his application was the subject of months of media and governmental scrutiny makes this even less likely.

In reality, there is evidence to suggest that the fault may lie with Tennis Australia and the Victorian state government. Those two entities accepted the post-COVID exemption in violation of the federal government’s regulations and may even have misled prospective players. It is not only Novak Djokovic who is at risk;  the visa of Czech tennis player Renata Voracova has now been cancelled by the Australian Border Force, and she is currently being detained at the same hotel as Djokovic. Additionally, one coach has allegedly left the country and several other players are under investigation.

As an Orthodox, Djokovic was forced to spend his Christmas day in detention. Father Milorad Locard, the dean of Melbourne’s Holy Trinity Orthodox Church attempted to visit Djokovic in order to mark the feast day, but was prevented from doing so by the authorities.

Perhaps the greatest irony of the situation is the context in which this controversy is taking place: Australia is experiencing an explosion in case-numbers of the “Omicron variant”. As of January 6th, there were more than 650,000 cases of COVID in the country, yet overseas travellers who have tested negative and presumably have antibodies in their systems, are being denied entry. 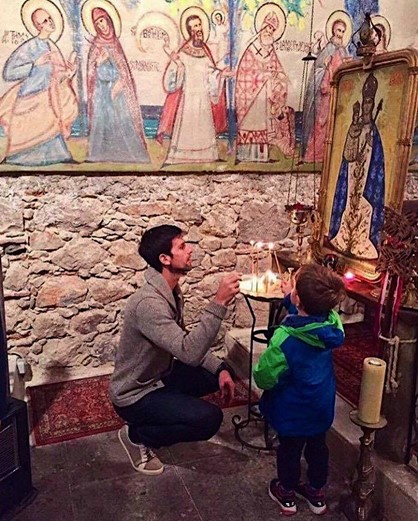 Novak Djokovic at church with his son

The entire episode looks like a carefully-rehearsed drama, with government, media and refugee advocates all playing their respective parts. But the story takes on an extra note of poignancy, with the celebration of Christmas by the Serbian Orthdox falling on January 7th. As an Orthodox, Djokovic was forced to spend his Christmas day in detention. Father Milorad Locard, the dean of Melbourne’s Holy Trinity Orthodox Church attempted to visit Djokovic in order to mark the feast day, but was prevented from doing so by the authorities.

Whether or not Novak Djokovic is eventually allowed to compete, one thing is for sure: discrepancies between the vaccine requirements of various jurisdictions have played a large part in this confusing scenario. The unfolding situation will undoubtedly be exploited to the full by those who are promoting a New World Order. The message the Overlords wish to send is clear: no matter how high your profile, there are serious consequences for refusing to be vaccinated and chaos (their predicted, perfectly-planned chaos) will reign unless we are permitted to implement our global digital passport.

[Comment Guidelines - Click to view]
The Remnant values the comments and input of our visitors. It’s no secret, however, that trolls exist, and trolls can do a lot of damage to a brand. Therefore, our comments are heavily monitored 24/7 by Remnant moderators around the country.  They have been instructed to remove demeaning, hostile, needlessly combative, racist, Christophobic comments, and streams not related to the storyline. Multiple comments from one person under a story are also discouraged. Capitalized sentences or comments will be removed (Internet shouting).
The Remnant comments sections are not designed for frequent personal blogging, on-going debates or theological or other disputes between commenters. Please understand that we pay our writers to defend The Remnant’s editorial positions. We thus acknowledge no moral obligation whatsoever to allow anyone and everyone to try to undermine our editorial policy and create a general nuisance on our website.  Therefore, Remnant moderators reserve the right to edit or remove comments, and comments do not necessarily represent the views of The Remnant.
back to top
Last modified on Monday, January 10, 2022
Tweet