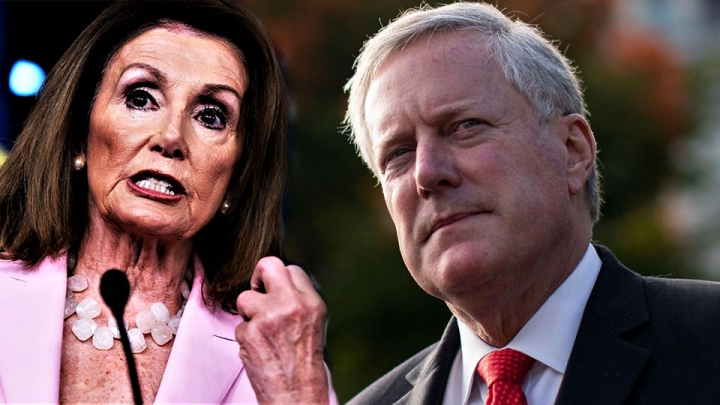 Here's how the Mark Meadows lawsuit breaks down so far:

On Tuesday, former Trump Chief of Staff Mark Meadows announced that he would no longer work with the House’s Jan 6 Committee (Pelosi's Kangaroo Court) because they were not respecting Executive Privilege and the separation of powers.

Next move, the committee came forward with criminal contempt charges against Meadows.

Later that same day, Meadows turned the tables on the "U.S. House Select Committee on the January 6 Attack," filing a lawsuit in federal district court in D.C. that argues the committee is unconstitutional and in violation of House rules:

Now it's being reported that Meadows could actually win and shut down the entire, corrupt Jan 6 operation. God grant him success! Could there still be justice left in the US Court system?

[Comment Guidelines - Click to view]
The Remnant values the comments and input of our visitors. It’s no secret, however, that trolls exist, and trolls can do a lot of damage to a brand. Therefore, our comments are heavily monitored 24/7 by Remnant moderators around the country.  They have been instructed to remove demeaning, hostile, needlessly combative, racist, Christophobic comments, and streams not related to the storyline. Multiple comments from one person under a story are also discouraged. Capitalized sentences or comments will be removed (Internet shouting).
The Remnant comments sections are not designed for frequent personal blogging, on-going debates or theological or other disputes between commenters. Please understand that we pay our writers to defend The Remnant’s editorial positions. We thus acknowledge no moral obligation whatsoever to allow anyone and everyone to try to undermine our editorial policy and create a general nuisance on our website.  Therefore, Remnant moderators reserve the right to edit or remove comments, and comments do not necessarily represent the views of The Remnant.
back to top
Last modified on Saturday, December 11, 2021
Tweet
More in this category: « BUILD BACK FREEDOM: Biden Mandate Blocked Nationally The light at the end of the Covid »