CANADA NEWS: Arrest Warrant Out for Polish Pastor Who Kept His Church Open During Lockdown 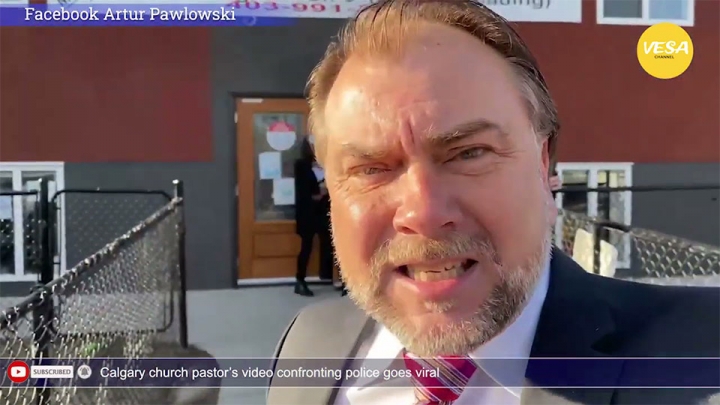 WashingtonExaminer: A Polish pastor who kicked Canadian government officials out of his church in defiance of coronavirus lockdown rules has been hit with a warrant for his arrest from a Calgary court.

Court of Queen’s Bench Justice David Gates has given police the green light “to use such reasonable force as they deem appropriate to gain access” to Pastor Artur Pawlowski’s The Fortress (Cave) of Adullam church in Calgary, according to a court order obtained by Rebel News.

"They want to arrest us only because we dare to worship our God, and we want to do it in peace."  – Pastor Pawlowski

The order also states that if Pawlowski, or anyone else, interferes with that order, law enforcement can “do anything necessary” to arrest him.

“They want me in jail. They want to arrest us only because we dare to worship our God, and we want to do it in peace,” Pawlowski, who grew up behind the Iron Curtain in Poland, said about the situation. “They’re coming very heavy. They’re bringing documents, they’re bringing SWAT team. They’re bringing health inspectors, police officers, and bylaw officers.”

REMNANT COMMENT: You probably remember this pastor's first video in which he throws police and a COVID "health inspector" out of his church. Now watch the video below--no less courageous and inspiring--of the second time police showed up at his church, this time with a warrant to enter and ensure COVID restrictions are being followed (15% capacity, masks, sanitization, etc.).

"I believe they want a revolution," says Pawlowski, after he sends the "Nazi, communist, fascist" police and health inspector away with their tails between their legs. "I truly believe that they're pushing so hard because they want a reaction; they want martial law."

Pawlowski follows the police to the street as they retreat back to their squad cars, then turns the camera around and delivers a raw and brutally honest assessment of the current situation. "What they're doing is illegal and unconstitutional. They're not serving the people anymore, they're working against the people. And it's up to the people to show them if they will bow and allow them to do that, or if they will rise up, stand up, and remove those evil, wicked, wannabe dictators from the places of authority."

Below is an April 6 interview of Pastor Pawlowski by Mark Stein of Fox News, in which the Pastor recalls how the Poles ultimately won their freedom from the communist dictatorship:

[Comment Guidelines - Click to view]
The Remnant values the comments and input of our visitors. It’s no secret, however, that trolls exist, and trolls can do a lot of damage to a brand. Therefore, our comments are heavily monitored 24/7 by Remnant moderators around the country.  They have been instructed to remove demeaning, hostile, needlessly combative, racist, Christophobic comments, and streams not related to the storyline. Multiple comments from one person under a story are also discouraged. Capitalized sentences or comments will be removed (Internet shouting).
The Remnant comments sections are not designed for frequent personal blogging, on-going debates or theological or other disputes between commenters. Please understand that we pay our writers to defend The Remnant’s editorial positions. We thus acknowledge no moral obligation whatsoever to allow anyone and everyone to try to undermine our editorial policy and create a general nuisance on our website.  Therefore, Remnant moderators reserve the right to edit or remove comments, and comments do not necessarily represent the views of The Remnant.
back to top
Last modified on Monday, May 3, 2021
Tweet
More in this category: « THE TRUMP TWEETS: Donald Trump on Twitter's Plummeting Popularity THE TRUMP TWEETS: Trump Responds to Facebook's Decision to Leave Him in Jail »