APOSTASY AND OLD LACE: Do We Have an Uncle Benny Brewster in the Attic? 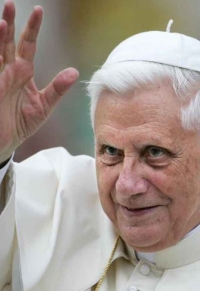 Editor’s Note: The Vatican, perpetually awash in embarrassing nonsense, is erupting in a new scandal over what’s now considered a “controversial” book on priestly celibacy.

The story is changing rapidly. As we went to post this article today, reports had it that Pope [Emeritus—sorry!] Benedict XVI is demoting his name from co-author to “contributor” in the new book: From the Depths of Our Hearts.

A “source close to Benedict” (read: Msgr. Ganswein, the presumed Pope Francis II—You heard it here first!!) is, quite frankly, pitching a little fit over Cardinal Sarah’s claim that Benedict co-authored the book. And Benedict has reportedly requested the English publisher of the book, Ignatius Press, to remove his name as co-author.

Assuming that anyone cares, and nobody does, those of us who have been around the block a couple of times are coming down with Cardinal Sarah on this one. But not to worry, I’m sure that collaboration between Benedict and Sarah could be easily overlooked by someone as busy working to save souls as is Bishop Ganswein (note the ‘holy man’ sitting to the right of His Holiness):

With or without actual circus performers, the Circus that is the post-Conciliar Vatican is really outdoing itself, replete with bearded ladies, two popes, snake charmers, the whole bit! The asteroid can't come soon enough. MJM

THERE IS A racket emanating again from up in the in-law apartment at the Vatican.

Like a scene from the old Carey Grant movie, Arsenic and Old Lace, where looney Uncle Teddy (“Theodore Roosevelt”) Brewster periodically charges up the stairs, summoning his Rough Riders to battle, Benedict XVI has entered the fray for a second time within twelve months.

Nearly seven years after his resignation from the Papacy, (questionably legal, but certainly effective) the good bishop has found himself to be in fine fiddle, enough to coauthor a new book with Robert Cardinal Sarah on priestly celibacy. (An excellent topic, but a better one would have been priestly chastity.)

Last year Benedict penned a lengthy reflection entitled “THE CHURCH AND THE SCANDAL OF SEXUAL ABUSE.”  In both publications he is still sporting his old title, Benedict XVI, and so should we accommodate him. His novelty title, Pope Emeritus, seems to be falling into disuse. 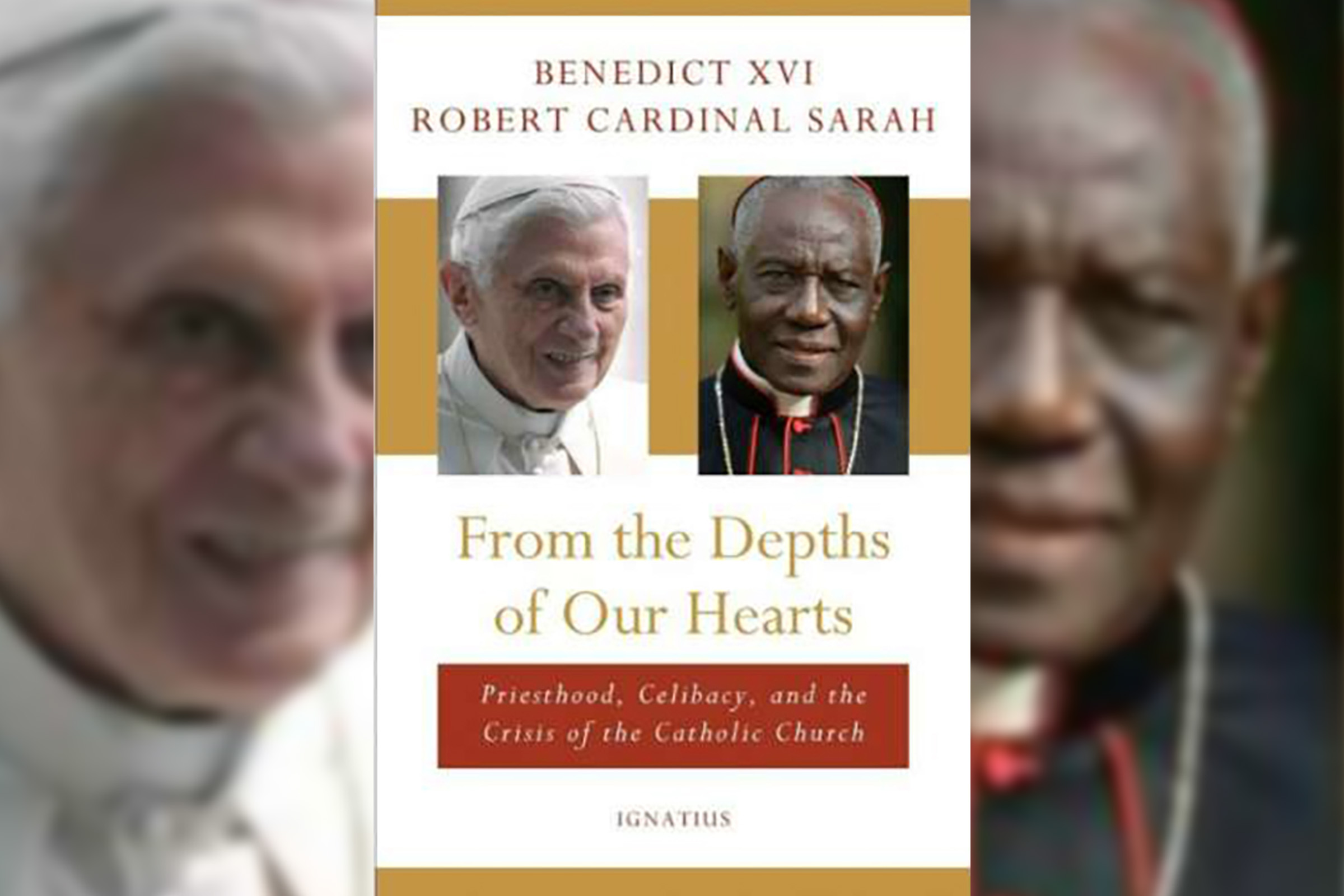 I do not plan to read the new book, and there are good reasons for why not.  Start with the co-author, Cardinal Sarah, who has repeatedly claimed to support everything said and done in the current “pontificate.”  He is likely to be among the first and most prominent apologists for the new paradigm of married clergy if and when it becomes official. Forgive the cynicism, but after fifty years of conservative bishops ever only managing to conserve liberal innovations, I’m sort of from Missouri on this one.

As for the main collaborator, Benedict XVI, I’m a bit nonplussed. For one thing,  I read “THE CHURCH AND THE SCANDAL OF SEXUAL ABUSE,” and most of what Benedict had to say therein can be dismissed on these grounds: Benedict is either 1) officially irrelevant; 2) cannot identify any personal responsibility for the mess; or 3) praises and thanks his successor, who is apparently also not at all responsible for the fact that the ship is going down. Come to think of it, he is silent about his “sainted” predecessors, too.

Nevertheless, Benedict XVI did manage to flip a klieg light on the real problem, perhaps inadvertently. He states nonchalantly:

As the criteria for the selection and appointment of bishops had also been changed after the Second Vatican Council, the relationship of bishops to their seminaries was very different, too. Above all, a criterion for the appointment of new bishops was now their “conciliarity,” which of course could be understood to mean rather different things.

Indeed, without a doubt “conciliarity” could mean different things to different people, which is axiomatic. But in fact, and in practice the only differences were between bishops who ranged from conservative/liberal all the way down to crazy leftist.

Look around the world and pick the most conservative bishops elevated in the last fifty years. The ones who have even suggested a clarification of any issues in the documents of Vatican II are hard to find, and it’s easier to find Jimmy Hoffa than a bishop who acts contrary to the non-mandatory liturgical changes to the Mass.

The late, great Bishop Robert Morlino’s permission for a prie-dieu to be available for communicants who want to receive Communion on the tongue is about as radical and rare as it gets. There are few if any who have ordered the altars to be ad orientum, or Communion to be given kneeling and on the tongue. At most they might permit it, grudgingly. And this is the easy stuff, compared to helping the flock reconcile Dignitatis Humanae, for example, with the Church’s prior Magisterium.

Much safer to just issue another “brave” condemnation of racism.

Most adult Catholics can remember being told by some savvy cleric, perhaps with a condescending air of Romanitas, that human nature is was it is, or that there are no perfect candidates, or that the Church has survived the coming and going of much worse bishops. But let us consider just how fine the sieve of “conciliarity” has been when it came to screening out orthodox Catholic priests for the last half-century. The few who got through are so thoroughly compromised that they can achieve little more than to solidify and defend their predecessor’s “most conservative” liberal innovations. Doing away with girl altar boys at this late date, for example, would certainly confuse the flock, don’t you know!

Many commentators have observed that the crisis in the Church is a crisis of hierarchal leadership. A crisis of bad bishops.  Benedict XVI’s reflection last year supports this conclusion, even if it was not his intention. It was certainly not his intention to lay the crisis of the bishops at the feet of the last four Popes (not including John Paul I). But by who else’s authority was the sieve set on “conciliarity”? Who else consciously chose to exclude priests who were worthy of being bishops but were “too rigid’, “too conservative,” “too pious,” and worst of all “pre-Vatican”?

Benedict XVI chose to quit the field of battle at the most crucial moment. He might have been coerced by the SWIFT banking scandal (the Society for Worldwide Interbank Financial Communication head-quartered in the St. Gallen’s area of Switzerland), or by the active conspiracy of Cardinal Danneel’s “St. Gallen’s mafia,” or just overwhelmed by the voluminous report he’d received exposing the magnitude of the homosexuality in the hierarchy. The reasons why he fled from the wolves might impact the validity of his choice, but it is likely that we will never know.

The reflections of Benedict XVI on the sexual abuse scandal, and his latest attempt to stop the abolition of priestly celibacy, might be the efforts of an old man to clear his conscience before death. God’s blessings on him, but even more so on us, who have been abandoned to the same wolves who evidently chased Benedict up into the Vatican’s mother-in-law apartment.

If our Uncle Benedict Brewster wants to come down from the attic occasionally to harangue the family about the world, that’s fine. A lot of families have one.  But if ours wants any serious credibility, his analysis will have to become a little deeper than a Time magazine view of the Sixties, and a lot more honest about the role his own ecclesiology played in creating the mess.  And he can start by acknowledging the resident evil in the living room, even while the scandals are being dug up in the basement.

[Comment Guidelines - Click to view]
The Remnant values the comments and input of our visitors. It’s no secret, however, that trolls exist, and trolls can do a lot of damage to a brand. Therefore, our comments are heavily monitored 24/7 by Remnant moderators around the country.  They have been instructed to remove demeaning, hostile, needlessly combative, racist, Christophobic comments, and streams not related to the storyline. Multiple comments from one person under a story are also discouraged. Capitalized sentences or comments will be removed (Internet shouting).
The Remnant comments sections are not designed for frequent personal blogging, on-going debates or theological or other disputes between commenters. Please understand that we pay our writers to defend The Remnant’s editorial positions. We thus acknowledge no moral obligation whatsoever to allow anyone and everyone to try to undermine our editorial policy and create a general nuisance on our website.  Therefore, Remnant moderators reserve the right to edit or remove comments, and comments do not necessarily represent the views of The Remnant.
back to top
Last modified on Tuesday, January 14, 2020
Tweet

More in this category: « MICHELLE WILLIAMS: A Catholic Mother's Response Edward Pentin on the Munich Demonstration Against German Bishops »