The Remnant Returns to the French Front 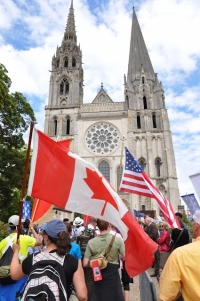 Seems like the Old Boy doesn’t want the Pilgrimage to Chartres, France, to happen this year. First, the Cathedral of Notre Dame— starting point for the annual Pentecost Pilgrimage—nearly burnt to the ground, sending a rather ominous message to the world that if the Catholic Church is not restored in holy Tradition, she too will burn to the ground.

Undaunted, the organizers of the Chartres Pilgrimage—the most high-profile annual traditional Catholic event in Europe—refused to be deterred. As was reported in this column last issue, with Notre Dame still smoking the French traditionalists managed to secure permission to launch the Pilgrimage to Chartres from Saint-Sulpice, the second largest church in Paris.

As if in reward for their grit and determination, good news came out of Paris just days later: Not only was Notre Dame spared but as Tess Mullins reported last week here at RemnantNewspaper.com, Christendom’s iconic Cathedral of Notre-Dame de Paris will be faithfully restored:

On May 27, 2019, the French Senate voted to approve plans to rebuild Notre Dame Cathedral and added a clause stipulating that it must be restored to how it was before the fire. There has been controversy surrounding the restoration of the centuries old church, which was gutted by a massive fire last month. Some have called for the Notre Dame to be rebuilt exactly as it was, while others have pushed to add more modern elements to the Parisian landmark. The Senate approved the bill Monday which would have the Notre Dame restored before Paris hosts the 2024 summer Olympics, but added that the cathedral must be rebuilt to its “last known visual state.”

Nothing about a glass roof or, my favorite conspiracy theory, a swimming pool on the roof of Notre Dame. And the best part? French President Marcon—who declared the fire a national emergency and then freaked out quite a few Catholics and art history enthusiasts with his overzealous international architects’ competition that seemed open to modern innovations—won’t have power to veto this new legislature even if he wanted to. The rebuild will be completed within the promised five years, and by 2024 Notre Dame will stand exactly as we remember her in 2019. Thank God!

Nevertheless, just when that “fire had been put out”, we received word that Air France had cancelled the flight from New York on which the Remnant chapter had been booked to fly to Paris for the start of the pilgrimage. With less than one week to go, there was a day-long scramble with Delta Airlines here at The Remnant to reroute every single pilgrim from various cities around the country.  Nightmare!

I think—I hope—all 80 Remnant pilgrims will now arrive in time for the June 8th start of the Pentecost Pilgrimage to Chartres. (Please God.)

In your charity, please keep us in your prayers and be assured that the now 28-year-old Remnant Chapter of Our Lady of Guadalupe will remember the readers of The Remnant on the 3-day walk to Chartres. 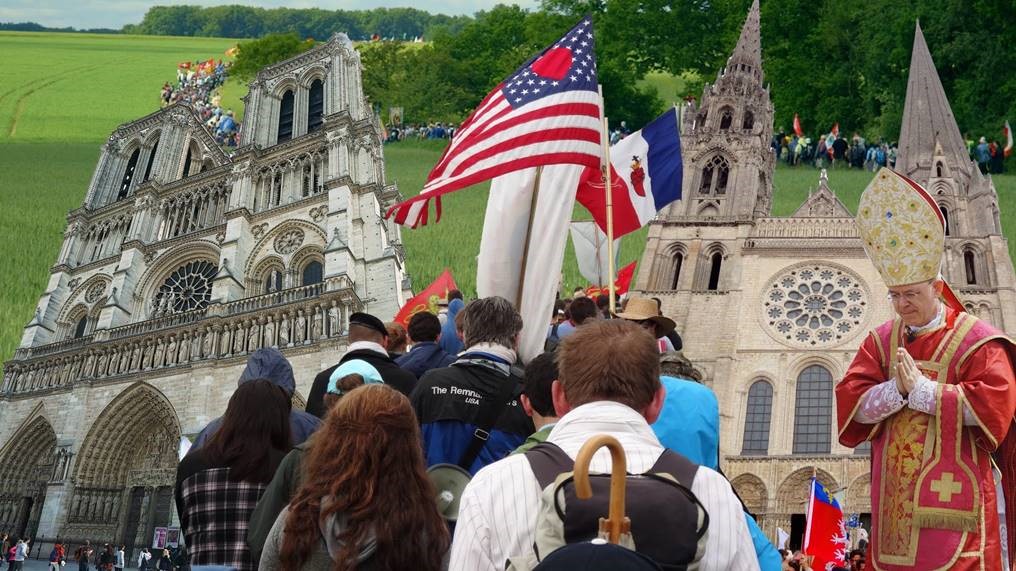 By the way, would you like to become a ‘virtual pilgrim’ to Chartres this year?  You can follow along from home with the prayers and meditations by joining the Guardian Angels Chapter. Details can be found at our new website: www.ChartresPilgrimageUSA.com

After the pilgrimage, The Remnant pilgrims will be travelling to the Austrian Marian shrine at Mariazell, where our chaplain will be offering Mass near the miraculous statue of Our Lady for the intentions of the sponsors of this year’s Remnant Tours Youth Fund.

A Word to Our Sponsors

I want to extend my thanks and assurances that your “investment” is paying off in a big way. After nearly 30 years on the road to Chartres, there are too many success stories to tell—vocations to the religious life and priesthood, marriages that resulted from friendships formed between pilgrims (I think we’re up to 20 now), Catholic activists inspired to take up the Catholic cause.

My own assistant, Tess Mullins, who’s become invaluable to our work here at The Remnant, was thrown headlong into the traditional Catholic cause some thirteen years ago when, as a recent convert to Catholicism, she first walked the road to Chartres.

So much good, so many graces, so many young Catholics that might never have found their way into the Catholic counterrevolution had it not been for the Chartres Pilgrimage and had it not been for you—Remnant readers who, 28 years ago, trusted our assurances that this is NOT a European vacation and that what we’re trying to do with the French pilgrimage is, in fact, to launch an American Catholic restoration movement. And it’s working! 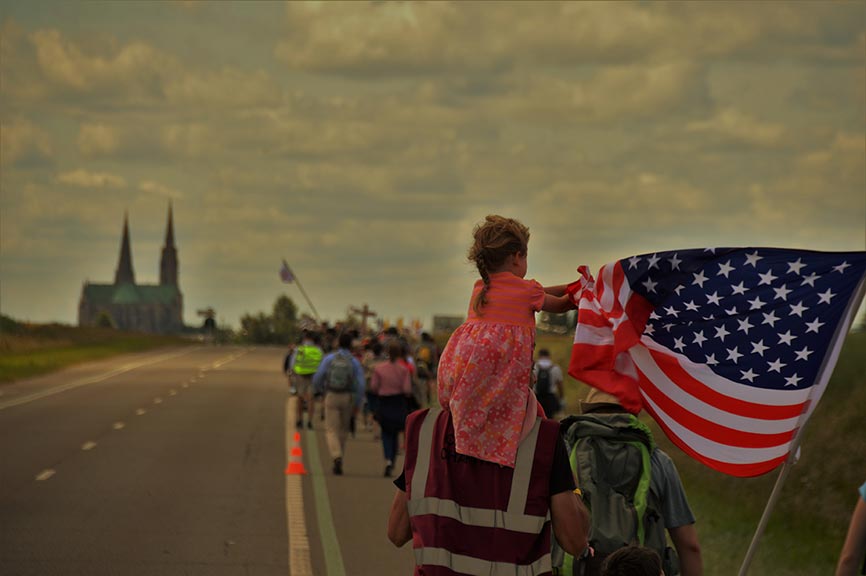 I knew first-hand how this powerful event can transform lives since I had experienced for myself how the grace of pilgrimage is made available in such an intimate and powerful way on the road to Chartres. The pilgrimage inspires soldiers of Christ like nothing I’ve seen before or since. And your trust in that vision has paid off, which is why we’ve dedicated almost thirty years to the near-constant promotion of this authentic Traditional Catholic action.

Simply put, nothing impacts young people more immediately and with greater spiritual force than the Pilgrimage to Chartres.  And, as I see it, very few things matter more to the future of our world than the successful recruitment of young Catholics into the war for Catholic restoration by swearing allegiance to the Christ the King and promising to keep the old Faith when the evil new world is telling them to abandon it.

What difference do our efforts make if in the end we fail to recruit the next generation in this fight for the preservation of everything that matters.

Please, join us in prayer during the three days of Pentecost pilgrimage. Visit www.ChartresPilgrimageUSA.com and follow along as rookies and veterans post prayer intentions, photos and reactions on the brand-new live blog.  Check back with  www.ChartresPilgrimageUSA.com on a daily or even hourly basis over Pentecost weekend and during the Octave of Pentecost. Help us build an international network in support of this worldwide traditional Catholic rendezvous in France. 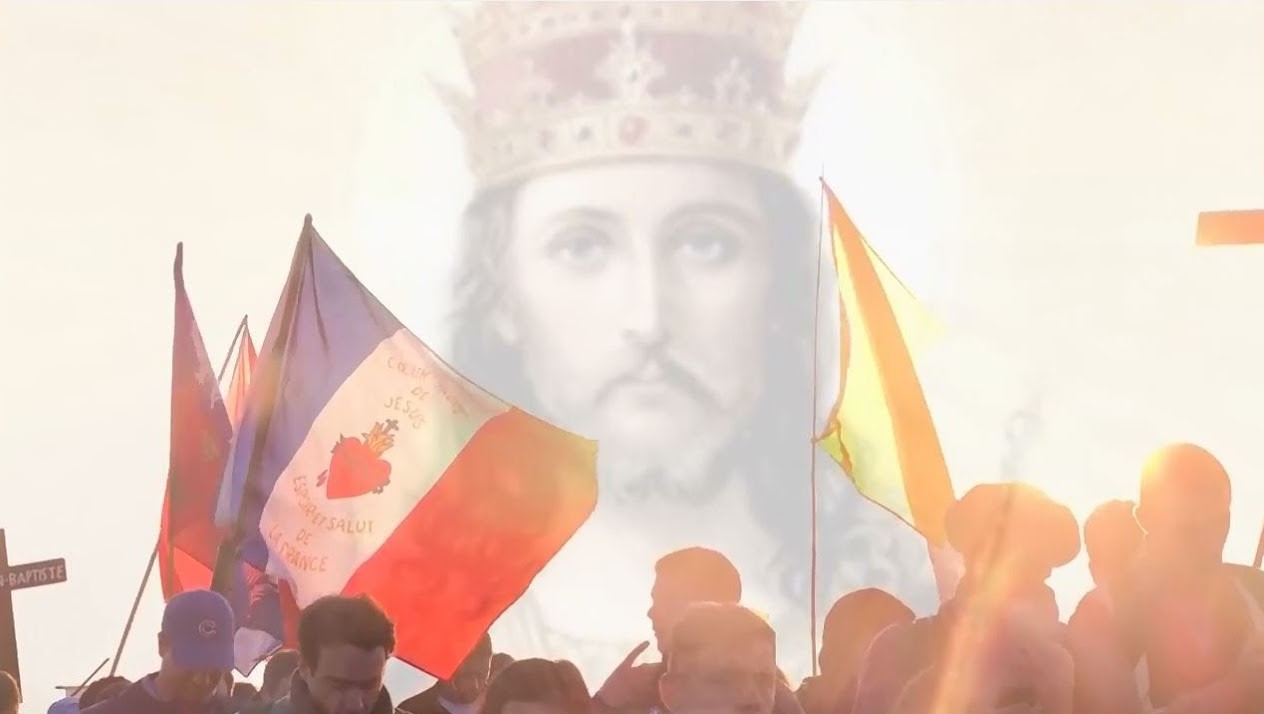 [Comment Guidelines - Click to view]
The Remnant values the comments and input of our visitors. It’s no secret, however, that trolls exist, and trolls can do a lot of damage to a brand. Therefore, our comments are heavily monitored 24/7 by Remnant moderators around the country.  They have been instructed to remove demeaning, hostile, needlessly combative, racist, Christophobic comments, and streams not related to the storyline. Multiple comments from one person under a story are also discouraged. Capitalized sentences or comments will be removed (Internet shouting).
The Remnant comments sections are not designed for frequent personal blogging, on-going debates or theological or other disputes between commenters. Please understand that we pay our writers to defend The Remnant’s editorial positions. We thus acknowledge no moral obligation whatsoever to allow anyone and everyone to try to undermine our editorial policy and create a general nuisance on our website.  Therefore, Remnant moderators reserve the right to edit or remove comments, and comments do not necessarily represent the views of The Remnant.
back to top
Last modified on Tuesday, June 4, 2019
Tweet