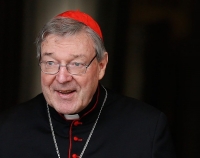 This just in from George Weigel of FirstThings.com:

Has it occurred to anyone else debating the perverse verdict rendered against Cardinal George Pell, which convicted him of “historic sexual abuse,” that the cardinal did not have to return to his native Australia to face trial? As a member of the College of Cardinals of the Holy Roman Church and a Vatican official, Pell holds a Vatican diplomatic passport and citizenship of Vatican City State. Were he guilty, he could have stayed put in the extraterritorial safety of the Vatican enclave, untouchable by the Australian authorities. But because Cardinal Pell knows he is innocent, he was determined to go home to defend his honor—and, in a broader sense, to defend his decades of work rebuilding the Catholic Church in Australia, the living parts of which owe a great deal to his leadership and courage.

Cardinal Pell and I have been friends for over fifty years, and in the past two and a half decades of that friendship I have been appalled at the calumnies to which he has been subjected, in both the hyper-secularist Australian media and in Church circles determined to hang on to their dreams of post–Vatican II revolution.

REMNANT COMMENT: It's no secret that Mr. Weigel and The Remnant have had our differences of opinion. However, mere common sense tells us that all Catholics have a vested interest in decrying the travesty and obvious miscarriage of justice where Cardinal Pell is concerned.

The Mystical Body of Christ again stands accused before Pilate, and the pagan empire that crushed Christendom and holds us all captive, acknowledges no distinction whatsoever between traditional Catholics and the so-called neo-Catholics. As far as they are concerned, all practicing Catholics will eventually need to either deny Christ or be gagged, jailed, or put to death--whatever it takes to silence His voice in the modern world.

The fact that Cardinal George Pell is now locked up in solitary confinement for 23 hours out of the day while Mr. Ted McCarrick runs around Kansas free as a vulture should remove any doubt about this.

The persecution begins anew…and all Christians had better watch their backs.