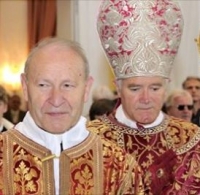 The General Chapter of the SSPX has elected two additional Assistants General to serve on the Council of the Superior General, Father Davide Pagliarani, in accordance with the common law of the Church.

Remnant Comment: While this development may well prove to be a good thing, at first glance it is somewhat confusing.  From the vantage point of an outside observer, it looks something like a general manager of a baseball team announcing his intention to keep his two previous baseball managers knocking around the front office to "advise" the new guy on how to establish a different style of leadership.  Bit awkward for everyone. Keep them around if you want, but why make the big announcement that seems to send mixed signals?

Without wishing to take anything away from the good job done by either of these men in the past, I'm sure the SSPX leadership can appreciate why some traditional Catholics are a bit apprehensive over this announcement, since they were looking forward to the fresh approach of a 'new coaching staff' rather than an apparent reshuffling effort that may mean 'business as usual' when it comes to a whole host of problems blamed, fairly or not, on the previous 'coaching staff.' And this includes ardent supporters of Bishop Fellay, who only want what is best for the Society.

The SSPX General Chapter is still in session, by the way, and therefore this brief observation is meant only in a constructive sense-- as merely the initial reaction of just one member of the Catholic press, while there may still be time to amend or clarify.

Whatever happens, let's redouble our prayers for the SSPX--a crucial player in the Catholic restoration movement--and let us pray for the success of their General Chapter.

[Comment Guidelines - Click to view]
The Remnant values the comments and input of our visitors. It’s no secret, however, that trolls exist, and trolls can do a lot of damage to a brand. Therefore, our comments are heavily monitored 24/7 by Remnant moderators around the country.  They have been instructed to remove demeaning, hostile, needlessly combative, racist, Christophobic comments, and streams not related to the storyline. Multiple comments from one person under a story are also discouraged. Capitalized sentences or comments will be removed (Internet shouting).
The Remnant comments sections are not designed for frequent personal blogging, on-going debates or theological or other disputes between commenters. Please understand that we pay our writers to defend The Remnant’s editorial positions. We thus acknowledge no moral obligation whatsoever to allow anyone and everyone to try to undermine our editorial policy and create a general nuisance on our website.  Therefore, Remnant moderators reserve the right to edit or remove comments, and comments do not necessarily represent the views of The Remnant.
back to top
Last modified on Friday, July 20, 2018
Tweet

More in this category: « Francis, Vatican to 'Clarify' Viganò Charges (but what about Burke's dubia?) Who Will Be the Next Pope? »