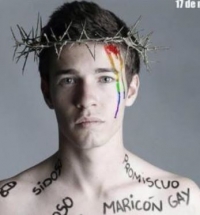 LifeSiteNews recently quoted a spokesperson from the diocese of Lexington, Kentucky, who said that choosing to support LGBT is a decision for each parish to make on its own. At least one parish, "historic " St. Paul Catholic Church, is already proudly flaunting the rainbow on their property, with the message of acceptance and love for all.

According to a NewWaysMinistry report, Fr. Chris Clay, a priest at St. Paul, said the banner is “a small way of counteracting any experiences of hostility, rejection, and silent treatment that LGBTQ Catholics may have experienced.”

An ecstatic parishioner named Stan quipped in a TV spot, “Our LGBTQ sisters and brothers should not be afraid to come in here, will not feel judged, will not feel as though they’re trampling on territory that isn’t theirs." 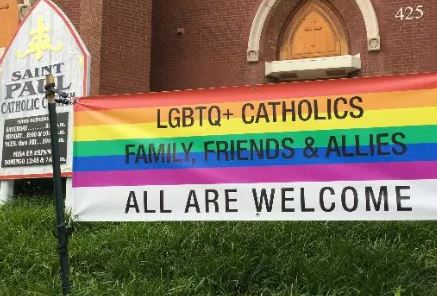 It’s no surprise that old Stan is excited about this, since he’s the overzealous executive director of Fortunate Families, a pro-LGBT “Catholic” organization which regularly posts blasphemous images such as a gay man crowned with thorns and bleeding rainbow colors, or Our Lady wrapped in the rainbow flag. But what does Lexington’s bishop have to say about it?

Well, Bishop John Stowe was one of five bishops to endorse Fr. Jimmy Martin’s pro-LGBT book, “Building a Bridge”--so how do you think he feels about it?

While celebrating anomalies like St. Paul and a few more in the New York Tri-City area, as well as in California, NewWays lamented that many Catholics aren’t on board yet with LGBT inclusion:

Globally, however, Catholic views on LGBT inclusion and Pride remain on a spectrum. While societal acceptance of the LGBTQ community ramps up in many places, church leadership and more conservative Catholics steadfastly hold on to negative teachings on sexuality and gender. This year, the Catholic bishop of Providence, Rhode Island, discouraged parishes and individual Catholics from participating in Pride events. LGBTQ Catholics have become accustomed to not being welcomed in the Church, turned away or ostracized for their sexuality and/or gender identity. But change is needed because having a spiritual home is important to so many people, especially to LGBTQ Catholics.

REMNANT COMMENT: An alcoholic goes to the local Alcoholics Anonymous group and says, “Hello, my name is Steve, and I’m a proud alcoholic with no intention of quitting... ever. But I want you to welcome me every week, anyway, because I’m a great guy! In fact, I want a sign out front that says: All Alcoholics welcome: Don’t Ever Change, we love you as you are!”

So, a spiritual home is important to unrepentant serial sodomites?  Terrific!  But then why did they choose a Church whose infallible, constant and unchanging moral teaching includes the following:

Homosexuality refers to relations between men or between women who experience an exclusive or predominant sexual attraction toward persons of the same sex... Basing itself on Sacred Scripture, which presents homosexual acts as acts of grave depravity, tradition has always declared that "homosexual acts are intrinsically disordered." They are contrary to the natural law. They close the sexual act to the gift of life. They do not proceed from a genuine affective and sexual complementarity. Under no circumstances can they be approved. (Catechism of the Catholic Church, 2357)

Under no circumstances…except for those evidently dreamed up by Bishop John Stowe and his team down in Lexington, which think parishes can do whatever they want in this regard.

Even Pope John Paul The GREAT's Vatican clarified the Church's teaching on October 31, 1986, in the “Letter to the Bishops of the Catholic Church on the Pastoral Care of Homosexual Persons”:

Although the particular inclination of the homosexual person is not a sin, it is a more or less strong tendency ordered toward an intrinsic moral evil; thus the inclination itself must be seen as an objective disorder. Therefore special concern and pastoral attention should be directed to those who have this condition, lest they be led to believe that the living out of this orientation in homosexual activity is a morally acceptable option. It is not.

Unless Bishop John Stowe of Lexington says it is, since Bishop John is evidently a magisterium unto himself that can allow parishes to follow their own rules willy-nilly.

But didn’t you get that memo, Bishop John? The Letter doesn’t say, “Let the practicing homosexuals have a spiritual home among your faithful.” So, you don’t feel the need to enforce the Church's infallible teaching? The buck stops with you, then?

How about the Bestiality community? Don’t they deserve a spiritual home, Bishop John? Nobody gets hurt. They just wanna marry their German Shepherds. What’s the big deal?  Are you ready to welcome them, too?  If not, aren't you yourself a bit of an intolerant bigot?

And philanderers?  Wife swappers? They get consent for what they do, too.  No victims there, right? So shouldn't St. Paul's put a sign in the churchyard for those fellows, too?

PHILANDERERS, FAMILY FRIENDS, and ALLIES ARE ALL WELCOME!

Or! Maybe the Church could stop humiliating herself by stooping to accommodate a crowd that obviously doesn't care about her or the moral code by which she governs.

Maybe if our LGBTQ+ the Alphabet friends truly think that a spiritual home is so important they could consider following the rules like everybody else.

And if they find that’s too difficult—that for them being a part of the Catholic Church means breaking the rules of the Catholic Church--how about they go find a spiritual home more to their liking? The Anglicans and Lutherans, for example—those cats are certainly down with the rainbow and My Little Pony crowd.

If our Alphabet friends are still unclear about the Church's rules on this, perhaps the recently canonized pope--St John Paul II—might be able to help.

In his 2005 book Memory and Identity, John Paul referred to homosexuality as an “ideology of evil,” insisting of so-called 'gay marriage' that:

“It is legitimate and necessary to ask oneself if this is not perhaps part of a new ideology of evil, perhaps more insidious and hidden, which attempts to pit human rights against the family and man.”

Was Pope John Paul THE GREAT an intolerant homophobe?  If so, can't the same be said of the man who canonized him? Surely, Pope (Who Am I To Judge) Francis isn't a homophobe, is he?

I may be going out on a limb here, but something tells me the Catholic Church, with all of her prohibitions against homosexual acts, may not be the best fit for our Alphabet friends--even if Bishop John says otherwise.

Come to think of it, who cares what Bishop John says. This guy is so uncharitable he can't even be bothered to inform his faithful that according to the Church's own infallible teaching, everlasting damnation is the price to be paid for his brand of inclusivity and toleration.

Ah, but you see the good bishop must be thinking of chaste homosexuals. Yes, that must be it!

But if that is so then what's the problem? We're all sinners. The Church already accepts repentant homosexuals as they are, just as she accepts repentant practitioners of ANY sins of the flesh. All our Alphabet friends have to do is make a good confession and BOOM! Problem solved.

Surely the good Bishop of Lexington knows this.

So we’re getting a load of Barbara Streisand here, aren’t we Your Excellency? What you’re actually closing an episcopal eye to are the folks who want to keep right on sinning--and sinning proudly. Aren’t you? And that’s a violation of everything you supposedly believe in as a Catholic priest. So you, too, it would seem, are in the wrong Church. Maybe you, too, should find another "faith community",  before you scandalize the hell out of this one.

Honestly, it’s brutally homophobic for a bishop to lie to the gay community about something like this, and to risk their immortal souls merely so that he might be perceived as politically correct. That's a genuine hate crime!

Surely, the Vatican will remove this derelict shepherd immediately, before he endangers the souls of any more of his faithful.

Yes, surely----just as soon as hell freezes over.

[Comment Guidelines - Click to view]
The Remnant values the comments and input of our visitors. It’s no secret, however, that trolls exist, and trolls can do a lot of damage to a brand. Therefore, our comments are heavily monitored 24/7 by Remnant moderators around the country.  They have been instructed to remove demeaning, hostile, needlessly combative, racist, Christophobic comments, and streams not related to the storyline. Multiple comments from one person under a story are also discouraged. Capitalized sentences or comments will be removed (Internet shouting).
The Remnant comments sections are not designed for frequent personal blogging, on-going debates or theological or other disputes between commenters. Please understand that we pay our writers to defend The Remnant’s editorial positions. We thus acknowledge no moral obligation whatsoever to allow anyone and everyone to try to undermine our editorial policy and create a general nuisance on our website.  Therefore, Remnant moderators reserve the right to edit or remove comments, and comments do not necessarily represent the views of The Remnant.
back to top
Last modified on Sunday, July 15, 2018
Tweet