“A Dereliction of Paternal Duty…” Open Letter to Bishop of Arlington

Written by  Michael and Christine DeSimone
Rate this item
(39 votes) 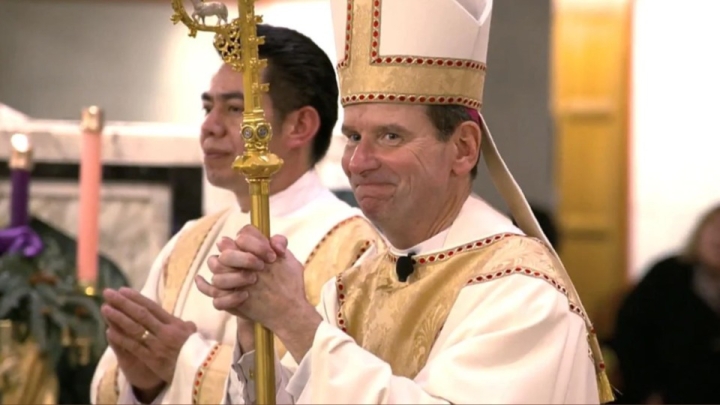 The purpose of this letter is to explain the reasons why our monthly contribution to the parish has been cancelled.

We believe that the new restriction on the Latin Mass in the diocese of Arlington is not the act of a true spiritual father and will ultimately be to the detriment of souls.

Unfortunately, as parishioners of no prominence, the only method we have of communicating our disgust with these developments is the withdrawal of our financial support of the diocese.  If there were another meaningful way to communicate with the diocese we would certainly have used it.

A bishop is neither a political figure nor a middle manager in some massive, global corporation.

Although a polarizing topic (in our view unnecessarily so), there is no denying that TLM has power to reach souls.  The salvation of souls is the supreme law of the Church.  No amount of enforced conformity can possibly be worth even one of those souls.

We are thinking here of the very many souls we personally know who have been greatly assisted by the Latin Mass.  Even within our own family we have two striking examples: The first is our father, who returned to the Faith after about 50 years - only when he was invited to attend the Latin Mass.  Praise God, he was able to attend TLM for several years and pass away with the help and consolation of all of the Sacraments of the Church.  The second example is our brother, who after suffering a severe drug addiction, returned to the Faith and currently attends TLM in the diocese.  When he is no longer able to attend TLM, we fear he may fall away once again.

It may be said, correctly, that these are men of weak faith.  But should we not offer the weak all the assistance we can give? Especially spiritual assistance?  It is tragic to think of all the fathers and brothers in the diocese who will not be helped once the new restrictions are in full force.

We count the new restriction on the TLM as dereliction of paternal duty on the part of the Bishop.

A bishop is neither a political figure nor a middle manager in some massive, global corporation.  He is a spiritual father of souls. Natural fathers are exhorted - often from the pulpit - on the need to sacrifice for their families. Sometimes he must sacrifice his finances, other times his career, his health or even his life.  But the sacrifice is always personally costly.  We would never praise a man who gave in to political exigencies to the detriment of his family.  We would never praise a man who achieved a worldly compromise at the expense of only a small percentage of his children.  We would never, in a remarkable perversion of the virtue, refer to such a man as obedient. Bishops are bound by an even higher standard.

It is for those reasons we count the new restriction on the TLM as dereliction of paternal duty on the part of the Bishop.  We are therefore compelled to call out this fact as effectively as we can, and part of that effort is to cancel our monthly contribution.

Thank you for your consideration and understanding.

[Comment Guidelines - Click to view]
The Remnant values the comments and input of our visitors. It’s no secret, however, that trolls exist, and trolls can do a lot of damage to a brand. Therefore, our comments are heavily monitored 24/7 by Remnant moderators around the country.  They have been instructed to remove demeaning, hostile, needlessly combative, racist, Christophobic comments, and streams not related to the storyline. Multiple comments from one person under a story are also discouraged. Capitalized sentences or comments will be removed (Internet shouting).
The Remnant comments sections are not designed for frequent personal blogging, on-going debates or theological or other disputes between commenters. Please understand that we pay our writers to defend The Remnant’s editorial positions. We thus acknowledge no moral obligation whatsoever to allow anyone and everyone to try to undermine our editorial policy and create a general nuisance on our website.  Therefore, Remnant moderators reserve the right to edit or remove comments, and comments do not necessarily represent the views of The Remnant.
back to top
Last modified on Tuesday, August 23, 2022
Tweet
More in this category: « SPOTLIGHT On Digital IDs and Useful Idiots THE CONVERSION OF SHIA LABEOUF: A Triumph of the Obvious »