FOX NEWS Gets it Right: Holds Up Catholic Saints as Answer to World Chaos 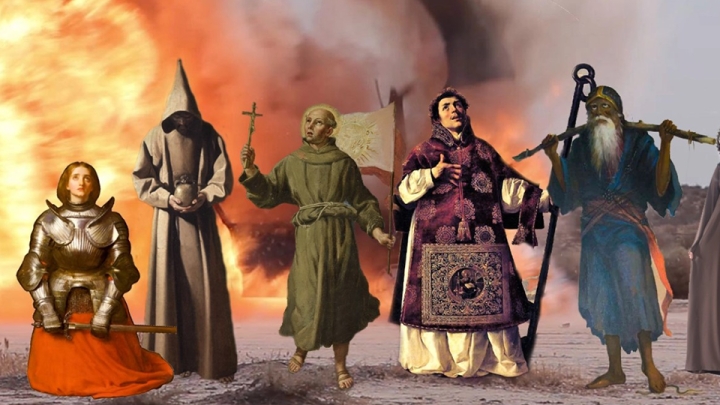 Learn from these heroic saints who lived against the grain

Saints are heroes. Be one.

(FOXNEWS) With the recent Supreme Court decision striking down Roe v. Wade, pro-life and pro-abortion factions have been jockeying to further influence our nation’s culture.  It’s hard not to notice the hateful ugliness of a visceral recoil coming from leftist activists. So why exactly does a nation’s culture matter? What’s at stake? Why does choosing to live a life of virtue, or vice, even matter?

With abortion and many other issues, the world is in a massive state of confusion. Violence is increasing. Order is breaking down. Everyone knows that there is something wrong afoot. Everything that is good these days is under attack. What’s going on, and what can everyday people do about it?

In Against the Grain: Heroic Catholics Through the Centuries I tell the story of 21 saints from 21 centuries focused on 21 virtues – and why virtue matters – especially for our time. Better understanding individuals who lived as shining examples, as signs of contradiction, who did what was right and not what was necessarily always popular. Against the Grain is a summons to heroic virtue, to sainthood, for all. To be a saint is to change the world one soul at a time.

When the world tilts toward crazy, the desire for the heroic increases. Americans love superheroes. Feel good stories about good defeating evil. Our rational brains inform us that while comic book and movie superheroes aren’t real, we’re fascinated by them nonetheless. Why is that? Instinctively we love our military, police, firefighters, medical and everyday heroes. Heroes give us solace, energy, and hope.

Dr. Jordan Peterson recently asked Church leaders to start asking more of young people. He spoke of "making big demands—big asks—of her members. By so doing they would get a heroic response, heroic involvement, and heroic dedication. Do we prefer short-term safety, affiliation or status over long-term freedom, belonging and heroism?"

Against the Grain, while focusing on heroic saints, is a highly relatable book as it also focuses on struggles and weaknesses. Against the Grain shows the path the saints walked to get to the point of strength. And that’s the example that you and I need. Where we too say, "Why not me?"

Against the Grain is a roadmap. It is a message to take action. An action of resistance to the globalists "Great Reset," "Great Transition," and to the anti-Christian elites.

Don’t wait for Calvary. Instead, move forward with moral confidence. If need be, heroic confidence. Step into the breach. Stand out. Go against the grain.

[Comment Guidelines - Click to view]
The Remnant values the comments and input of our visitors. It’s no secret, however, that trolls exist, and trolls can do a lot of damage to a brand. Therefore, our comments are heavily monitored 24/7 by Remnant moderators around the country.  They have been instructed to remove demeaning, hostile, needlessly combative, racist, Christophobic comments, and streams not related to the storyline. Multiple comments from one person under a story are also discouraged. Capitalized sentences or comments will be removed (Internet shouting).
The Remnant comments sections are not designed for frequent personal blogging, on-going debates or theological or other disputes between commenters. Please understand that we pay our writers to defend The Remnant’s editorial positions. We thus acknowledge no moral obligation whatsoever to allow anyone and everyone to try to undermine our editorial policy and create a general nuisance on our website.  Therefore, Remnant moderators reserve the right to edit or remove comments, and comments do not necessarily represent the views of The Remnant.
back to top
Last modified on Sunday, July 24, 2022
Tweet
More in this category: « Things That Make You Go Hmmm How About We Keep the Papacy and Dump Bergoglio? »