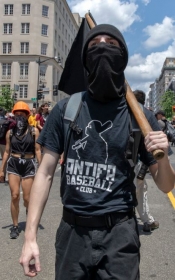 After the outbreak of the Chinese coronavirus last year many American schools suspended in-person classes. Even now students across the country are taking part in their school day online. Instead of getting on a bus or rolling out of bed in a college dorm to go to school, kids are propped up at their parents’ kitchen tables, staring at a screen while a teacher or a professor delivers lectures via Zoom.

Parents, now finally able to see what they are getting for their tax or tuition dollars, have not been amused. It is not the online-ness of the classes that is the problem. It’s the classes themselves.

More specifically, it’s the instructors. Public school teachers are tax-guzzling ideologues who can’t diagram a sentence but who do have a very highly-developed ability to watch pornography at their desk and harass Christian kids at lunchtime. Many of them are criminals. University professors are even worse.

Whether your child is enrolled in a “Fat Studies” course or one of the endless varieties of Race, Class, Gender, and Grievance 101, you have probably stood by agog as he, she, ze, xe, or shim has Zoomed with an “intellectual” explaining the finer points of lesbian protest literature or Maoist theater. Fifty thousand dollars for fifteen PowerPoints about Haymarket is pretty steep, eh Dad? How much would those slide presentations, and the expert commentary that goes along with them, be worth in the real world?

As the virus runs its course and we begin to look ahead to next semester, the question in the news has lately been, will schools reconvene in September, or will everything remain online for the rest of the year? This is understandably a big question to ask for those who have made an investment of time and often real estate in their children’s education. But it is the wrong question.

It does not matter if the school bell rings again in the fall. As the current revolution in the streets of a hundred cities is making very clear, the students have already learned everything they needed from public school. School’s out for summer, and that is partly why the streets are now choked with delinquents who would otherwise be in a classroom. But school might as well also be out for ever.

Here’s the real question we should be asking: What else is there to study? What we are witnessing now is the final exam in Socialist Insurgency, really the only subject that almost every “educational” institution has taught since the 1970s. Congratulations, grads—if you have taken the past week to burn down a building or beat up an old lady defending her livelihood, then you get an A-plus. Your diploma is your mail-in ballot for 2020. (We don’t think you need to be told how to use it.)

A few years ago, many of us were surprised to learn that among the leaders of Antifa, the Left’s favorite organization for killing innocent people apart from Planned Parenthood, are a number of public school teachers. That fact is not so surprising today. The truth is that Antifa and our education system are the same thing. This is more than apparent this week.

The country is coming apart, and the “teachers” are not only egging the street punks on, the teachers are the street punks. With a few exceptions—nearly everyone who disagrees with the Left was ousted from the schools and the academy years ago—classrooms in America are simply where the revolutionaries have been drawing the X’s and O’s of the battle plans being put into action today. New York City is burning, but that’s only proximately the work of roid-raging snowflakes on loan from Columbia.

The real brains behind all this is the legion of Antifa coordinators who throng the faculty lounges at just about every place—K-12, college, and especially graduate school—where “social justice” long ago became the only item on the curriculum. Social justice is just Leninism biding its time, the comic book version of Rules for Radicals wedged into a math or science textbook. You thought you were putting your kid on the school bus to go study calculus. They were probably learning how to throw Molotov cocktails instead.

Like ISIS recruits fresh out of the training camps, the kids on the streets today have outlived their need for public schools. And I can’t imagine the teachers will bother with the charade any longer, either. School’s out. Forever.

This may sound like wild rhetoric, but in fact limiting our critique to the public schools does not go nearly far enough. One Molotov cocktail devotee, Urooj Rahman, was bailed out of jail by a former Obama official after she was “charged with intentionally torching a police cruiser” in New York last week. The mayor of New York, Bill de Blasio, held a press conference a few days later in which he praised his own daughter for her arrest in the riots engulfing the city he was elected to protect.

Keith Ellison, the attorney general of the State of Minnesota, has tweeted out photographs of himself holding up Antifa literature. Ellison’s son, not to be outflanked by his radical old man, has declared his support for Antifa, too. It’s not just the public school teachers who are declaring themselves in lockstep with the terrorists. It’s public officials, too. (Did you think the Democrats were going to give up their coup that easily?)

And this is all to say nothing of the raft of celebrities and politicians mouthing the usual pabulum about supporting other terrorist organizations and hate groups such as By Any Means Necessary (what “means” do you think they mean by that?), Black Lives Matter, the Southern Poverty Law Center, and even the Biden Campaign apparently committed to ensuring that chaos reigns wherever poor black people cannot afford private security. Being able to tweet your support for mayhem from your compound in the Hamptons while black businesses get looted by Bernie Bros. If that’s not white privilege I simply cannot think of what is.

But don’t expect anyone on the left to start calling for reform. The lines are drawn now and there is no going back to the old hypocrisy. An article in a recent issue of Harvard Magazine profiles the work of Elizabeth Bartholet, for example, an anti-Christian bigot and demagogue who alleges that homeschooling is the source of so many of America’s ills that the very practice should be banned. This is what they think of you, America. I have spent many years among this tribe. The Left mocks the very idea of civilization and debate. They simply want to put you in camps and be rid of you.

The real solution to all of this would be to shut down all the universities and public schools and make homeschooling the only option for the next twenty years. One generation untouched by institutionalized Weather Underground-ism would revitalize the entire nation, perhaps even the whole world. To wit, I would be interested in statistics showing how many among the rioters and looters—and, now, murderers—running wild through the streets of our country have slogged through a Great Books program under the tutelage of dear old fascist mom and dad. Probably zero. But according to Elizabeth Bartholet, it’s you who are the problem, not the blood-soaked arsonists.

Not just Elizabeth Bartholet. His Holiness has spent his pontificate mocking you, too. In all this swirling din and bomb-smoke let us not forget the silence of our Catholic leadership. Pope Francis, the fairweather pacifist, has said nothing to attempt to calm the storm. (Maybe he’s against wanton murder only when it’s not the communists who are carrying it out—that was certainly his view in Latin America, at any rate.) One of his cathedrals was desecrated in New York, and an Episcopal temple was burned right next door to the White House.

This is terrorism against Christians right in the financial and political heart of America. Francis is mum. Not a single word. As with the crackdown against Christians in China, and now in Hong Kong, Francis seems offers new life to an old truth: qui tacit consentire videtur. Et tu, Jorge? Why won’t you come to stricken Christian parishes in the US and smell like the American sheep?

Churchmen have not all held their tongue, though. The Archbishop of Washington, Wilton D. Gregory, took time out of his day to condemn President Donald Trump and First Lady Melania Trump for visiting, and praying at, the Saint John Paul II National Shrine. No Republicans welcome at the altar of God. (But don’t politicize the Eucharist!)

Archbishop Gregory, in a stunning display of historical amnesia, used the example of Pope John Paul II to chide the Trumps, saying that the late pontiff would not have approved of dispersing armed mobs.

Archbishop Gregory may not be aware that John Paul spent his entire adult life before becoming pope living under the same communist terrorists who now torch churches in the United States. Your Grace, please, do yourself a favor and google “Poland under communism”. No, better yet, google “Mindszenty in Hungary”. But maybe if you try appeasing the Red Guards outside your office window it will all work out for the best. The American Vendée has started, but Archbishop Gregory appears to be throwing in his lot with Canclaux.

Nice try, Wilton. (I simply cannot wait to hear what Dolan is going to have to say about all this. Dolan? Hello?) The archbishop should not be faulted too harshly, though. He spent his childhood in Catholic schools. As we are now learning, those are even worse than the secular institutions.

Whatever happens over the coming “long, hot summer,” the fact is that the mask, ironically, is now off the Left. The nexus of terrorism in this country is the taxpayer-funded educational system. For some fifty years the entire purpose of that system has been to foment socialist revolution, to soften up the two generations required to minimize resistance to communism. That objective now splendidly accomplished, the schools are no longer necessary. School’s out for summer. School’s out forever.

[Comment Guidelines - Click to view]
The Remnant values the comments and input of our visitors. It’s no secret, however, that trolls exist, and trolls can do a lot of damage to a brand. Therefore, our comments are heavily monitored 24/7 by Remnant moderators around the country.  They have been instructed to remove demeaning, hostile, needlessly combative, racist, Christophobic comments, and streams not related to the storyline. Multiple comments from one person under a story are also discouraged. Capitalized sentences or comments will be removed (Internet shouting).
The Remnant comments sections are not designed for frequent personal blogging, on-going debates or theological or other disputes between commenters. Please understand that we pay our writers to defend The Remnant’s editorial positions. We thus acknowledge no moral obligation whatsoever to allow anyone and everyone to try to undermine our editorial policy and create a general nuisance on our website.  Therefore, Remnant moderators reserve the right to edit or remove comments, and comments do not necessarily represent the views of The Remnant.
back to top
Last modified on Monday, June 15, 2020
Tweet

More in this category: « A Tale of Two Murders DIOCESAN PRIEST: Viganò & the Crisis of Vatican II »