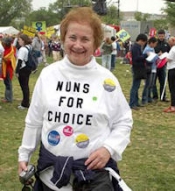 According to the Washingtonpost.com, "Vatican unexpectedly ends crackdown of US nun group. The Vatican on Thursday unexpectedly ended its controversial reform of the main umbrella group of U.S. nuns, cementing a shift in tone and treatment of the U.S. sisters under the social justice-minded Pope Francis. The Vatican said it had accepted a final report on its overhaul of the Leadership Conference of Women Religious and declared that the “implementation of the mandate has been accomplished” nearly two years ahead of schedule.

"It was an abrupt about-face given that just last year, the head of the Vatican’s doctrine office, Cardinal Gerhard Mueller, sharply rebuked the LCWR for its “regrettable” attitude and behavior during the process. He accused the LCWR of being in “open provocation” with the Holy See and U.S. bishops."  FULL STORY HERE

REMNANT COMMENT: Readers will recall that back in 2012 the CDF had accused the LCWR (Liberal Champions of Whacky Religious) of heterodoxy and of publicly undermining Catholic teaching on the priesthood, homosexuality and contraception while promoting “certain radical feminist themes incompatible with the Catholic faith.” The CDF had launched a five-year overhaul plan to fix a “grave” doctrinal crisis that had left the LCWR far removed from church teaching on issues like abortion and euthanasia. But that was Benedict, this is Francis.

Today, HALLELUIAH and wouldn't you know it-- the Vatican has wrapped up its investigation TWO . YEARS . AHEAD . OF . SCHEDULE (!) and found the good sisters to be in compliance with Church teaching and ready to rock 'n' roll. Isn't that special!

By the way, I think that Synod on the Family in October is going to go very well!  Don't you?

Please Help The Remnant Fight Back Against this Insanity!

[Comment Guidelines - Click to view]
The Remnant values the comments and input of our visitors. It’s no secret, however, that trolls exist, and trolls can do a lot of damage to a brand. Therefore, our comments are heavily monitored 24/7 by Remnant moderators around the country.  They have been instructed to remove demeaning, hostile, needlessly combative, racist, Christophobic comments, and streams not related to the storyline. Multiple comments from one person under a story are also discouraged. Capitalized sentences or comments will be removed (Internet shouting).
The Remnant comments sections are not designed for frequent personal blogging, on-going debates or theological or other disputes between commenters. Please understand that we pay our writers to defend The Remnant’s editorial positions. We thus acknowledge no moral obligation whatsoever to allow anyone and everyone to try to undermine our editorial policy and create a general nuisance on our website.  Therefore, Remnant moderators reserve the right to edit or remove comments, and comments do not necessarily represent the views of The Remnant.
back to top
Last modified on Thursday, April 16, 2015
Tweet