Did Pope Francis Just Deny the Existence of Hell? 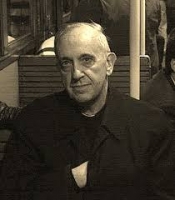 I don't know if this reported papal interview with the prominent Italian atheist journalist Eugenio Scalfari has been translated and circulated in English. Pope Francis' reported affirmation that the wicked are annihilated after death and so do not suffer eternal punishment occurs about half way through the Italian text HERE.

"Scalfari: What happens to that lost soul? Will it be punished? And how? The response of Francis is distinct and clear (netta e chiara): there is no punishment, but the destruction/annihilation of that soul. [The Italian word is annullamento, literally, "turned into nothing", meaning here the same as the more usual Italian word for annihilation, annientamento] All the others will participate in the beatitude of living in the presence of the Father. The souls that are destroyed/annihilated will not take part in that banquet; with the death of the body their journey is finished. And this is the motivation of the Church’s missionary activity: to save the lost. And it is also the reason why Francis is a Jesuit to the end."

I translated this from Italian myself, having lived in Rome for many years and knowing Italian well. This annihilation of the wicked has been a popular thesis among liberal Jesuits in recent decades. And, yes, it is heretical – directly contrary to many Gospel passages (e.g., Mt. 25: 46) and the constant teaching of the Church's magisterium. Scalfari says this response of Francis to his question was "netta e chiara" -- "clear and distinct".

So if it's not quickly denied by the Vatican I think we can take it as probably authentic – although Scalfari has not always been exact in past reports of interviews with Pope Francis. (Denial of Hell and annihilation of the wicked is also the Jehovah's Witnesses' doctrine!)

One shock after another. O, Lord, when will it end?

And yet the latest Pew research poll says the Holy Father enjoys a 95% job approval rating from weekly Mass-going Catholics in the U.S.

[Comment Guidelines - Click to view]
The Remnant values the comments and input of our visitors. It’s no secret, however, that trolls exist, and trolls can do a lot of damage to a brand. Therefore, our comments are heavily monitored 24/7 by Remnant moderators around the country.  They have been instructed to remove demeaning, hostile, needlessly combative, racist, Christophobic comments, and streams not related to the storyline. Multiple comments from one person under a story are also discouraged. Capitalized sentences or comments will be removed (Internet shouting).
The Remnant comments sections are not designed for frequent personal blogging, on-going debates or theological or other disputes between commenters. Please understand that we pay our writers to defend The Remnant’s editorial positions. We thus acknowledge no moral obligation whatsoever to allow anyone and everyone to try to undermine our editorial policy and create a general nuisance on our website.  Therefore, Remnant moderators reserve the right to edit or remove comments, and comments do not necessarily represent the views of The Remnant.
back to top
Last modified on Sunday, March 22, 2015
Tweet
More in this category: « Answering a Sedevacantist Critic Annunciation & the Golden Legend »