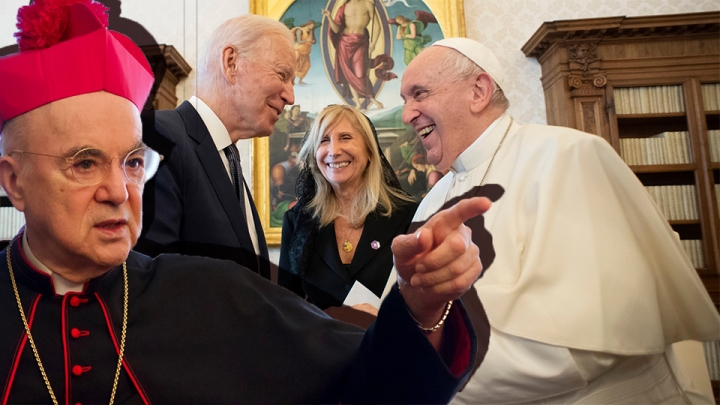 On the occasion of the October 29 visit to the Vatican, the press agencies[1] have spread the news that Joe Biden reported the content of the meeting and said that Francis called him “a good Catholic,” inviting him to “continue to receive Communion.” It is disconcerting that, to date, no clarifying comment has come from the Vatican Press Office. This leaves us to presume that Joe Biden’s words correspond to the truth and that Bergoglio actually spoke them.

The most serious scandal is given to the faithful not only by Joe Biden as a convinced supporter of abortion, but also by Bergoglio himself, who is recognized as holding the authority of Supreme Pastor of the Church.

Even if what Biden said corresponds perfectly to the intemperate quips of Jorge Mario Bergoglio – who called a notorious radical abortion activist a “great Italian” – it is evident that such statements represent an unheard of scandal, since they fail to condemn the positions of a political personality who supports abortion, disavow the immutable position of the Magisterium of the Church, and resound as a blatant invitation to commit sacrilege, profaning the Most Holy Eucharist by receiving it in the state of public and manifest sin.

This has nothing to do with the mission of the Papacy and ought to lead the Prelates of the Church to seriously ask themselves about Bergoglio’s mental and moral suitability for the role he holds.

Every Catholic knows that the killing of a defenseless creature in the mother’s womb is a horrendous crime; and that the most serious scandal is given to the faithful not only by Joe Biden as a convinced supporter of abortion, but also by Bergoglio himself, who is recognized as holding the authority of Supreme Pastor of the Church. His work of demolition knows no respite before the astonished silence of the Cardinals and Bishops. The very rare exceptions of Pastors who truly have at heart the souls entrusted to them – the example of His Eminence Cardinal Burke[2] stands out among others – are seen with hostility by the majority of their brother Bishops and by the Vatican, in a disturbing subversion of the mission of the Church of Christ, which today has been reduced to climate change, inclusive capitalism, and mass vaccination. Bergoglio was recently recognized as “moral guide” by the Council for Inclusive Capitalism led by Lynn Forester de Rothschild, and he appointed Jeffrey David Sachs as a member of the Pontifical Academy of Social Sciences. Sachs is the president of the Sustainable Development Solutions Network of the United Nations, a supporter of reducing the global population and of the fight against climate change[3] – this has nothing to do with the mission of the Papacy and ought to lead the Prelates of the Church to seriously ask themselves about Bergoglio’s mental and moral suitability for the role he holds.

I exhort the faithful, on the Feast instituted by Pius XI in honor of the social Kingship of Our Lord Jesus Christ, to beseech the Divine Majesty, asking that among the many societies afflicted by the present crisis, the Church of Christ may be the first in which Jesus Christ, who today has been replaced by the idols of globalist ideology, returns to reign.

[Comment Guidelines - Click to view]
The Remnant values the comments and input of our visitors. It’s no secret, however, that trolls exist, and trolls can do a lot of damage to a brand. Therefore, our comments are heavily monitored 24/7 by Remnant moderators around the country.  They have been instructed to remove demeaning, hostile, needlessly combative, racist, Christophobic comments, and streams not related to the storyline. Multiple comments from one person under a story are also discouraged. Capitalized sentences or comments will be removed (Internet shouting).
The Remnant comments sections are not designed for frequent personal blogging, on-going debates or theological or other disputes between commenters. Please understand that we pay our writers to defend The Remnant’s editorial positions. We thus acknowledge no moral obligation whatsoever to allow anyone and everyone to try to undermine our editorial policy and create a general nuisance on our website.  Therefore, Remnant moderators reserve the right to edit or remove comments, and comments do not necessarily represent the views of The Remnant.
back to top
Last modified on Monday, November 1, 2021
Tweet

More in this category: « VATICAN PRO-ABORTS: Francis Owned by New World Order Grading Francis and Ourselves on the Good Samaritan Standard »