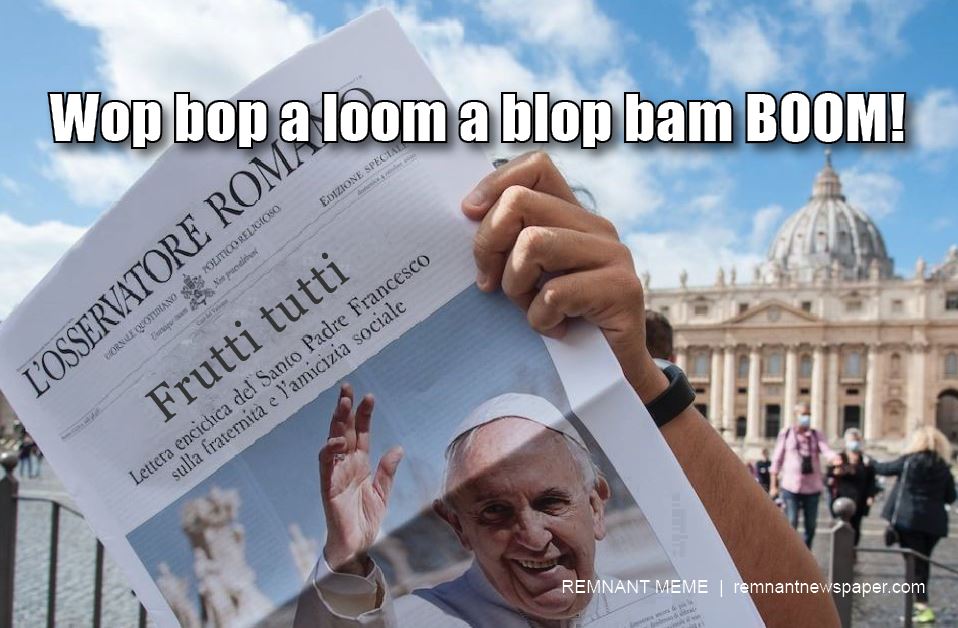 Fratelli Tutti, Pope Francis’s latest encyclical containing 43,000 words, has nothing to do with a well-known variety of Italian ice cream, although some loyal Catholics may be forgiven for crediting the traditional Tutti Frutti dessert with more depth, substance and meaning than the latest offering from the Holy Father. Fratelli Tutti, though, like the ice cream, is sweet, gooey and inoffensive to the modern mind. Who could argue, for example, with the sugary statement that ‘everyone has a fundamental role to play in a single great creative project: to write a new page of history, a page full of hope, peace and reconciliation’ or perhaps this one: ‘If only we could view our political opponents or neighbours in the same way that we view our children or our spouse, mother or father! How good would this be!’  Yeah!

So what is the Pope there for? In order to get to the bottom of this crisis of teaching it is necessary to establish the original contract of employment between God and the Holy See. Put briefly, the Pope is under a dual obligation firstly to defend the Faith and, secondly, to confirm his brethren. He is Christ’s vicar on earth and tradition tells us that the reason the Pope uses the royal “we” in his utterings (or used to at any rate) is because, to paraphrase Bishop Fulton Sheen, he speaks in union with his divine master who is Christ himself. Even Jesus Christ was not at liberty to change one word of teaching as it came from his Father in Heaven. “My teaching is not my own but from my Father who sent me.” (John 7:16) Even for the majority of people who know nothing about religion and care even less, the logic of the basic authority of the Pope is plain to see.

If the Pope makes a statement which is at variance with Catholic teaching he may be applauded on social media and elsewhere but if the Church is universal and is divine, which it has always claimed, (St. Thomas calls it the perfect society because it includes Purgatory and Heaven) then its teachings are also universal and applicable to all men and women of every time.  It follows from this that to depart from them, as I’ll demonstrate Francis has done in Fratelli Tutti, is to make a nonsense of the whole concept of doctrinal purity and causes utter confusion in the minds of good Catholics. It is this argument which is currently swelling the ranks of Sedevacantist groups who concluded long ago that the see of Peter is vacant and Pope Francis is an imposter. There’s not enough space to examine this claim but it is sufficient to say that you cannot really blame people who take this view.

All this begs the question: how does Pope Francis depart from Catholic teaching in Fratelli Tutti? Leaving aside the ‘pie-in-the-sky’ and totally unrealistic utterings about universal brotherhood, there are more serious issues to be addressed. They are whether His Holiness has denied, contradicted or questioned infallible Catholic teachings. I would maintain that he has done this in several places in his encyclical. As a starting point, it is worth stating that if some enlightened Catholic layman were to explain some of the infallible teachings to Pope Francis, he would probably be deeply shocked and perturbed. This assumes that he is ignorant of fundamental Church teaching which is the charitable way of looking at things.  One of these doctrines is that non-Catholic religions are false and offensive to God. Sorry folks, that’s Church teaching! Until Vatican II all Catholics believed this, but the Church has always preached tolerance in terms of ‘live and let live’ and maintained a vast missionary department spreading all over the world to make converts.

In paragraph 277 Francis proclaims ‘The Church esteems the ways in which God works in other religions (and) rejects nothing of what is true and holy in these religions.’  Archbishop Viganò, in hiding and fearing for his life because he exposed Vatican corruption, has said recently that this statement is “gravely equivocal and deceptive, more insidious than a blatant heresy.”  Another universal doctrine is that God loves us in proportion to our acceptance and love of him. But Francis states: (Para 281) “And God’s love is the same for everyone, regardless of religion. Even if they are atheists, his love is the same.” This statement, warming though it sounds, isn’t Catholic, not by any stretch of the imagination. What we need to know is whether the Holy Father is indeed ignorant of Church teaching because if he is not, then he has some explaining to do and Archbishop Vigano has even called for him to resign. It is better to be ignorant than heretical perhaps.

Two shocking statements of Catholic teaching are enough for now as they are hard to take in without the aid of a stiff single malt. The Pope’s espousal of the principles of the French revolution, liberty, equality and fraternity, in para 219, does not ring true given the bloodfest resulting from that historical event (not to mention the wholesale murder of Catholic priests) and verges on bad taste.

This universal brotherhood of man lark has been tried many, many times before in history. It’s in most communist manifestoes and the American constitution. There was a famous pop group by the same name and John Lennon mentions it in Imagine. This notion of brotherhood has been responsible for more deaths and incarcerations than any religion because an unfortunate side effect is that it only applies to people who agree with the authorities, including Pope Francis. His repeated calls for fraternal brotherhood call to mind his own unfortunate record in this sphere.

In his excellent book, The Dictator Pope – The inside story of the Francis papacy (Regenery Publishing 2018), Henry Sire catalogues his personal experiences of working in the high octane and deadly atmosphere that is the Vatican under Francis. One priest in the curia, notes Sire, observed that “They say it’s not what you know but whom you know. In the Vatican that isn’t true: it’s what you know about whom you know.” Sire notes (P.184) that  ‘Fear is the dominant note in the Curia under Francis’s rule.’ In order to pursue his political (and it is political) agenda Francis has been ruthless in his attacks on Catholics and Catholic institutions.

This is particularly evident when one examines his trashing of the prayerful Franciscans of the Immaculate, and all because these monks and nuns largely preferred the Latin Mass. This institution has been almost completely destroyed including its printing press, its seminaries and communities and all because they did not fit in with the Pope’s ideological view of the world. His onslaught against this order dedicated to St Francis of Assisi is particularly odd given His Holiness’s identification with that saint throughout Fratelli Tutti. Ordinary Traditional Catholics are beginning to tire of his ceaseless and ill-intentioned public verbal attacks on them, such as accusing them of “seeking to safeguard the ashes of the past” (Interview on a flight from Rumania in 2019) and “no need to breed like rabbits” (interview on a flight from the Philippines in 2015) His open threats against Archbishop Vigano were sufficient to drive this innocent prelate into hiding.

The Pope’s pre-emptive strike against the Trappist monastery of Mariawald in Bavaria in 2018 was utterly ruthless. Here a thriving community was dispersed by direct order of Francis and its treasures auctioned off. All because the monks, like the Franciscans of the Immaculate, preferred the Latin Mass.

As Pope Francis continues to force his peacenik agenda on the world simple loyal Catholics see this encyclical as the precursor to sterner measures designed to shut down and silence once and for all the opponents of the revolution which is inspired by the Mein Kampf of  The Second Vatican Council (1962-1965) This is the basic problem; Vatican II. This delinquent council is in complete harmony with the Pope Francis revolution and Fratelli Tutti makes numerous references to the council, especially the document Nostra Aetate which, as most discerning Catholics know but will not admit, represents a striking departure from authentic Church teaching. Needless to say no reference is made to any Popes before the Beatles era and especially not the great 19th century pontiffs who went to heroic lengths to denounce the ideas of Pope Francis. Oh yes, the ideology of Fratelli Tutti is old hat and its principles have been condemned before and many times over.

This encyclical above all demonstrates the utter irrelevance of the Catholic Church to the human condition nowadays. It was barely reported in the mainstream media and has only been seriously examined by fringe religious websites. This must come as a disappointment to Pope Francis who hungers for media attention. If he had anything new to say that would be interesting, but to churn out page after page of tired clichés can only lead to the biggest turn off after the M32 at Bristol. The only people who are really upset are those who study the papal utterings and they are mainly conservative and traditional Catholics, no one else cares.

[Comment Guidelines - Click to view]
The Remnant values the comments and input of our visitors. It’s no secret, however, that trolls exist, and trolls can do a lot of damage to a brand. Therefore, our comments are heavily monitored 24/7 by Remnant moderators around the country.  They have been instructed to remove demeaning, hostile, needlessly combative, racist, Christophobic comments, and streams not related to the storyline. Multiple comments from one person under a story are also discouraged. Capitalized sentences or comments will be removed (Internet shouting).
The Remnant comments sections are not designed for frequent personal blogging, on-going debates or theological or other disputes between commenters. Please understand that we pay our writers to defend The Remnant’s editorial positions. We thus acknowledge no moral obligation whatsoever to allow anyone and everyone to try to undermine our editorial policy and create a general nuisance on our website.  Therefore, Remnant moderators reserve the right to edit or remove comments, and comments do not necessarily represent the views of The Remnant.
back to top
Last modified on Sunday, October 11, 2020
Tweet

More in this category: « CHRIST or CHAOS: Challenging the New World Order (CIC 2020) SAINT Christopher Columbus? The Roots of Christophobia in America »