Written by  Christopher A. Ferrara
Rate this item
(73 votes) 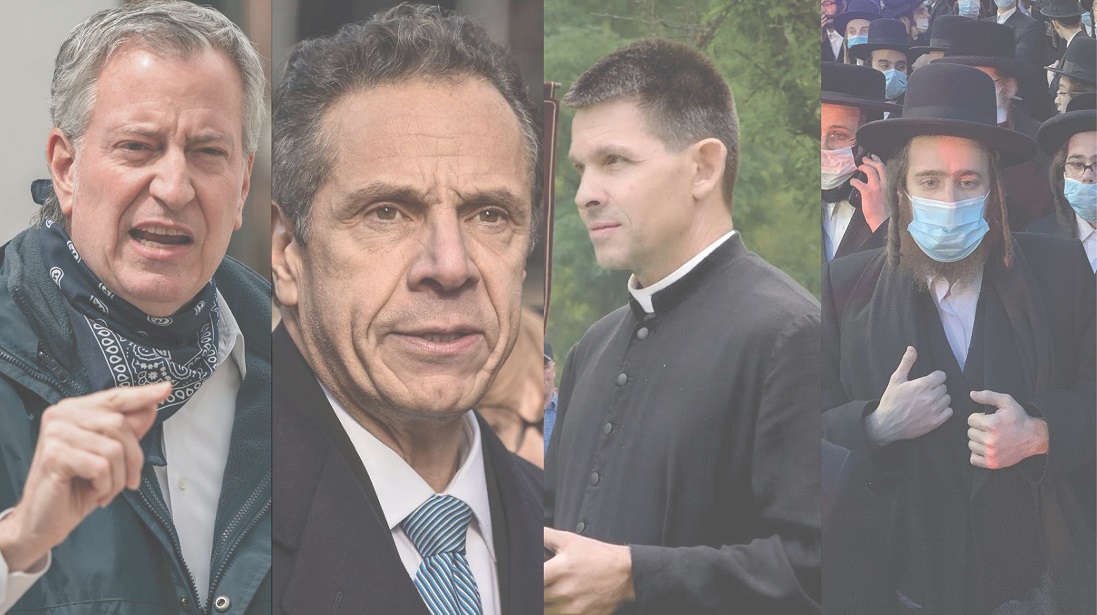 I haven’t appeared on these pages for a while because, as Special Counsel to the Thomas More Society (TMS), my time has been consumed with filing and prosecuting major litigation against the Governors of New York and New Jersey and the Mayor of New York City over their tyrannical and increasingly ridiculous COVID-19 “lockdown” regimes of executive orders that micromanage literally every aspect of the lives of millions of people on the pretext of a virus that is going the way of all seasonal viral epidemics.

Both suits involve an unusual alliance between priests of the Society of Saint Pius X—the only Catholic priests willing so far to challenge the lockdowns in court—and Orthodox Jews, who likewise are the only willing Jewish plaintiffs in suits against this tyranny.

In the course of representing this diverse clientele on the legal issues presented, I have been struck by the parallels between Roman Catholic traditionalism and Orthodox Judaism. Both constituencies represent marginalized minorities within their religious cohort, both are victim to backstabbing and betrayal by their own supposed co-religionists, and both are radically countercultural on social and moral issues.  Remnant readers may be surprised to learn that, for example, the Orthodox Jewish community in Lakewood, NJ, of which the Rabbi who is a plaintiff in my New Jersey action is a member, voted almost 100% for Trump in the last election and will do so again in November.

The New Jersey case involves an SSPX priest, Father Kevin Robinson, who serves an SSPX chapel in North Caldwell, and an Orthodox Rabbi, Yisrael A. Knopfler, whose synagogue is in Lakewood.

Father Robinson has been threatened with arrest by local police if he dares to offer a Mass whose congregation exceeds the numerical limits established according to the whims Governor Murphy.  Rabbi Knopfler, whose synagogue has been raided twice by local police on account of “illegal gatherings” exceeding King Murphy’s then-applicable limit of ten persons, was thrown to the ground, handcuffed behind his back, and dragged off to jail like a violent felon for having hosted a Jewish religious celebration in the backyard of his synagogue.

Feel good, beating the hell out of a rabbi?

Father Robinson has already appeared on the Tucker Carlson Show. Go here for another example of publicity on this case, and here for the press release by TMS, the national public interest law firm with which my own organization, American Catholic Lawyers Association, merged at the beginning of this year. I strongly urge Remnant readers to support TMS and the work it is doing all over the country—including, now, my own work—in the endless fight against the encroachment of the godless secular state.  You can read the New Jersey complaint here.

In New York, the unlikely alliance in the suit I filed is between two SSPX priests—Father Steven Soos and Father Nicholas Stamos—and three Orthodox Jews from Brooklyn: Daniel Schonborn, Mayer Mayerfeld and Elchanan Perr, whose Orthodox community has been the target of merciless oppression by de Blasio’s enforcement of Cuomo’s executive orders issued during the “lockdown.”  This suit has received prominent coverage by Fox News, found here.  You can read the New York complaint here.  The details of religious persecution are quite shocking.

Both suits have reached a tipping point as Murphy in New Jersey and Cuomo and de Blasi in New York have extinguished the entire phony “public health” rationale for their lockdown regimes—as well as their ludicrous multiphase “reopening” plans that have destroyed their respective state economies—by condoning and even participating in massive demonstrations protesting the death of George Floyd in which the “social distancing” scam is totally abandoned.  All three of these “leaders” have declared that protests over Floyd’s death are more important than divine worship and must be treated as an exemption from executive orders under which “too many” people in church and high school graduations are still banned while thousands march shoulder-to-shoulder in the streets to protest “systemic racism.”

As my New York suit alleges: “As the pandemic rapidly wanes, defendants’ ‘social distancing’ dictatorship, put to a test of neutrality and general application, instantly revealed itself as an exercise in social control for its own sake, applied selectively according to defendants’ value judgments rather than ‘science’ or ‘metrics.’”

For his part, Murphy has been embarrassed by scathing coverage of his hypocrisy in publicly praising and participating in mass “gatherings” that violate his own executive orders limiting “gatherings” to ten people, while favored businesses and other activities he arbitrarily  declares are not “gatherings” have no such restrictions.  To cover his own activity days before, Murphy has suddenly announced via Executive Order 152 that outdoor “gatherings” are no longer limited in size if they are for the purpose of “a religious service or a political activity,” but otherwise are limited to 100 persons.  As for a gathering indoors—meaning in churches or synagogues—more than 90 days into the waning “pandemic,” Murphy’s eyedropper now squeezes out an “allowance” for “25% of the capacity of the room in which it takes place” or 50 people, whichever is smaller.

Cuomo and Murphy alike have just made a complete hash of their own regulatory edicts, which only pretend to be neutral and generally applicable, but are now clearly revealed as arbitrary restrictions they make up as they go along.

Some questions Murphy in particular should be required to answer, as the New Jersey case proceeds, regarding his sudden discovery of First Amendment rights outdoors but not indoors:

It is time to end New York’s and New Jersey’s experiments in absolute monarchy—a most ironic development under governors whose party is called Democratic but is now an open advocate of mob rule in the streets for some, and endless lockdowns for others.

Please pray that both of these suits reach a speedy and just outcome, meaning an end to the reign of petty autocrats who invent rules to suit their whims while pretending they are just “keeping people safe.”  We cannot allow this newly emergent paradigm of tyranny by executive order to stand. The plaintiffs in both cases are, therefore, to be lauded for their courage.

Finally, again, please support the work of the Thomas More Society, of which I am honored to be a part.

Published in Remnant Articles
[Comment Guidelines - Click to view]
The Remnant values the comments and input of our visitors. It’s no secret, however, that trolls exist, and trolls can do a lot of damage to a brand. Therefore, our comments are heavily monitored 24/7 by Remnant moderators around the country.  They have been instructed to remove demeaning, hostile, needlessly combative, racist, Christophobic comments, and streams not related to the storyline. Multiple comments from one person under a story are also discouraged. Capitalized sentences or comments will be removed (Internet shouting).
The Remnant comments sections are not designed for frequent personal blogging, on-going debates or theological or other disputes between commenters. Please understand that we pay our writers to defend The Remnant’s editorial positions. We thus acknowledge no moral obligation whatsoever to allow anyone and everyone to try to undermine our editorial policy and create a general nuisance on our website.  Therefore, Remnant moderators reserve the right to edit or remove comments, and comments do not necessarily represent the views of The Remnant.
back to top
Last modified on Saturday, June 13, 2020
Tweet

More in this category: « VIGANÒ on REVOLUTION in the CHURCH: “From Vatican II onwards, a parallel church was built...” CONTROLLED CHAOS: Beating Trump, Gaslighting America »