From Law to McCarrick to Cupich: It’s Apostasy, Stupid!

Editor’s Note: When traditional Catholics were sounding the alarm against apostasy and moral corruption in the hierarchy decades ago, they were generally dismissed as schismatics, troublemakers and ‘rad trads.’ Remember?

Today, thanks be to God, many thousands are waking up to the same rot now firmly imbedded in the Church like ticks on a hound. The following article (under the title “Did Cardinal Law Resign for the Wrong Reason”) appeared in The Remnant back in April of 2003, when another twisted old cardinal was in the news.

I’m reproducing this article, along with a personal plea to those tens of thousands who are waking up at last to the real problems in the Church:

Please, don’t let it stop with the kiddie-diddlers, the Cardinal Elton John-types and the Merciful One in Rome—that is, the wretched effects and consequences of decades of unchecked doctrinal revolution in the Church. What we’re seeing today are the fruits of the Revolution of Vatican II—the great coming out party of Modernists and other radicals who got over the walls of our Church back when Francis was still in diapers.

Cardinal Law was a de facto apostate long before he started laying down cover for sexual predators. You typically don’t have one without the other, which is why until doctrinal and liturgical integrity is restored to the lifeblood of the Church, Catholics should expect only worse and more ecclesial debauchery. One follows the other like night follows the day.

Traditional Catholics—Latin Mass “rad trads”—were right fifty years ago to warn that liturgical revolution signaled the loss of faith in the Real Presence, which, by the way, explains everything that's going wrong now-- including and especially moral degeneracy in the priesthood. The problem is not celibacy. The problem is a systemic loss of faith, brought on largely by the attempted destruction of the Roman Rite and the introduction of protestantized liturgy.  Had the Traditionalists' warnings been heeded back then, the likes of Cupich, McCarrick, Wuerl and Bergoglio would never have floated to the top of the cesspool today.

Tradition was the inoculation way back then, and Tradition is the antidote now. So, let us all become Traditional Catholics without another moment’s delay. Our faith and final perseverance depend on it - Michael J. Matt 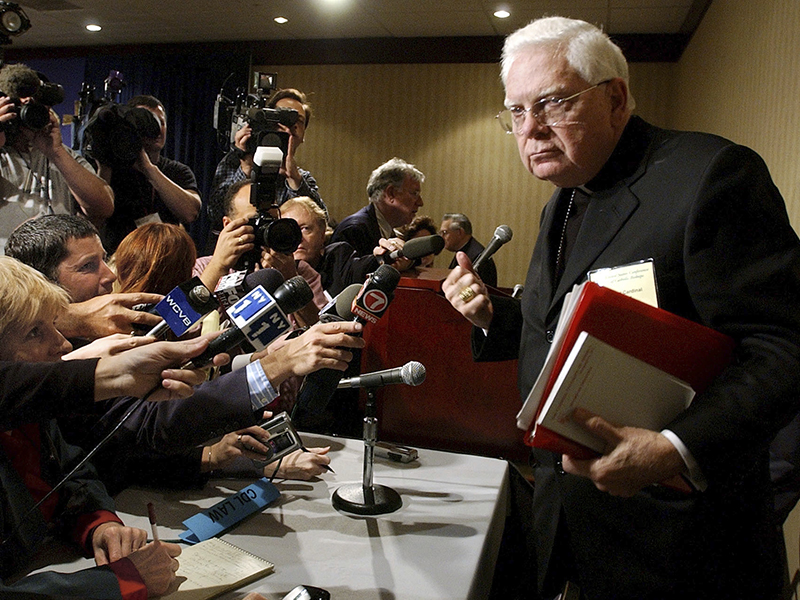 The beleaguered Pope Paul VI once lamented that the fumes of Satan had entered God’s Sanctuary in the aftermath of the “reforms” of Vatican II. The diabolical destruction of Christ’s Church continues with more reports of clerical debauchery and what now appears to be a monumental cover-up by the U.S. Catholic hierarchy of these egregious deeds. The most besieged member of this group, Cardinal Bernard Law, disgracefully stepped down from his post as Archbishop of Boston, saying, “To all those who have suffered from my shortcomings and mistakes, I both apologize and from them beg forgiveness.”[1]

As an aside, in nearly all the cases of “fallen” Churchmen, their “apologies” are directed to their fellow man or to “worldly powers.” Rarely do they seek “forgiveness” from Almighty God for bringing scandal upon His Holy Church. It is quite ironic in all of this mess that the Vatican has taken next to no disciplinary measures against these officials; yet, it continues to label the heroic Archbishop Lefebvre and traditionalists, “schismatic”!

It is abundantly clear for those who have eyes to see and ears to hear that the malignant catalyst behind the scandals, cover-ups, and heretical actions of an ousted cardinal is the “reforms” of the Second Vatican Council.

While the Cardinal’s resignation may have soothed, somewhat, the wrath of watchdog groups such as Voice of the Faithful and a virulent anti-Catholic press, a more recent “ecumenical” gesture by the prelate is, in the light of eternity, a far more nefarious offense than his negligence in monitoring wayward clerics. On the last Sunday of Pentecost (November 24, 2002), a week before the Holy Season of Advent was to begin, Bernard Cardinal Law, a supposed “vicar” of Christ’s Church, participated, from any reasonable standpoint, in an outright heretical action. The Cardinal voluntarily went to and worshiped in a Muslim temple and enthusiastically spoke about the experience afterwards! The following is a description of the “event” by the Boston Globe:

It was Sunday, and Cardinal Bernard F. Law had come to pray. So, wearing a gold crucifix and a flowing black robe with red trim, Law removed his shoes. Then, as the imam [the leader of prayer in a Moslem mosque] chanted the sunset prayers, the bishop knelt with his forehead just inches from the carpet and offered praise to Allah.[2]

Law did not feel out of place at the Islamic Center of Boston, saying that “religious Catholics” and Muslims share more “common ground” than is typically believed. He added: “I feel very much at home with my fellow fundamentalists here.”[3]

There is little doubt that Law, or for that matter the Pope, Cardinal Ratzinger, or any other Novus Ordo higher-up would feel “comfortable” in a mosque or any other non-Catholic “house of worship,” since for them, nearly every religion, even one that so virulently rejects Christ as God, have “revelation” in their creeds, or “subsist” in the Catholic Church. In the statement announcing his resignation, the Boston archbishop paid homage to his ecumenical efforts: “My gratitude extends as well to so many others with whom I have been associated in serving the common good; these include those from the ecumenical, Jewish, and wider interreligious communities, as well as public officials and others in the civil society.”[4]

The outrageous behavior of the Catholic hierarchy, unthinkable just a half-century ago, is now commonplace, and the inability of the Faithful to recognize and respond to what is taking place demonstrates just how far the Novus Ordo has triumphed.

Just as disturbing about Law’s “journey to the mountaintop” has been the utter lack of outcry from either his fellow clerics, the laity, or associations like Voice of the Faithful. That there would be little outcry over a Roman Catholic cardinal who would publicly participate in a religion that has throughout its malevolent history inspired its followers to enslave, murder, and torture Christians, desecrate their sacred shrines and, on several occasions, has attempted to overrun portions of Europe, suggests a far sinister Power at work than that of mere mortals. Yet, in the present sex-crazed culture, it should not be altogether surprising that the salacious scandals, many of which have involved “victims” above the “age of consent” and where, in a number of instances, the statute of limitations has lapsed, has evoked greater protest than when a chief prelate of the Catholic Church prostrates himself before Allah! 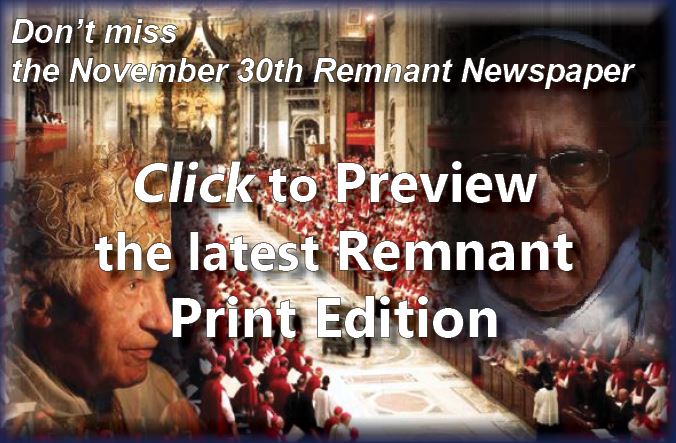 Except for the during the waning hours of Maundy Thursday, throughout Good Friday, and possibly during the high-water mark of the Arian crisis, there has never been as encompassing an apostasy as presently exists within the Church. It is abundantly clear for those who have eyes to see and ears to hear that the malignant catalyst behind the scandals, cover-ups, and heretical actions of an ousted cardinal is the “reforms” of the Second Vatican Council. The much-ballyhooed “renewal” inspired by the “spirit” at the Council has, in the retrospect of some 30 years, not been a Holy One.

The extreme gravity of the current situation, therefore, dictates that for Catholics who seek the salvation of their immortal souls (the whole purpose of life), there can be no compromise, involvement or debate with the “Counterfeit Church,” as one sage traditional priest has labelled the Novus Ordo. The entire apparatus, with its “sacraments” and the “new mass,” is rotten to the core, and, while it may still masquerade as “Catholic,” it has deliberately disobeyed nearly all that its Divine Founder commanded it to do.

Is it any wonder that the Church is suffering through such a severe crisis, when its new “worship service” dropped the venerable devotion to the one “Who is like unto God”?

The outrageous behavior of the Catholic hierarchy, unthinkable just a half-century ago, is now commonplace, and the inability of the Faithful to recognize and respond to what is taking place demonstrates just how far the Novus Ordo has triumphed. A full restoration is possible, but it will more than likely require heavenly intercession. One of the most powerful intermediaries is the Prince of the Heavenly Host, St. Michael the Archangel, who has so effectively dealt with such matters in the past. Catholics should take great solace and counsel in the words of the Angelic Doctor when he spoke of St. Michael: “Michael is the breath of the Redeemer’s spirit, who at the End of the World will combat and destroy the Anti-Christ, as he did Lucifer in the beginning.”

Is it any wonder that the Church is suffering through such a severe crisis, when its new “worship service” dropped the venerable devotion to the one “Who is like unto God”?

[Comment Guidelines - Click to view]
The Remnant values the comments and input of our visitors. It’s no secret, however, that trolls exist, and trolls can do a lot of damage to a brand. Therefore, our comments are heavily monitored 24/7 by Remnant moderators around the country.  They have been instructed to remove demeaning, hostile, needlessly combative, racist, Christophobic comments, and streams not related to the storyline. Multiple comments from one person under a story are also discouraged. Capitalized sentences or comments will be removed (Internet shouting).
The Remnant comments sections are not designed for frequent personal blogging, on-going debates or theological or other disputes between commenters. Please understand that we pay our writers to defend The Remnant’s editorial positions. We thus acknowledge no moral obligation whatsoever to allow anyone and everyone to try to undermine our editorial policy and create a general nuisance on our website.  Therefore, Remnant moderators reserve the right to edit or remove comments, and comments do not necessarily represent the views of The Remnant.
back to top
Last modified on Sunday, August 4, 2019
Tweet
More in this category: « Bishop Robert Morlino, RIP FORGET FRANCIS: Pope John Paul, the New Rosary, and the Revolutionary Tactics of Modernism »