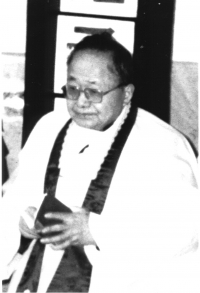 Bishop Joseph FAN ZhongLiang, S.J., the underground Bishop of Shanghai appointed by Blessed Pope John Paul II, died today at 5:58 pm Shanghai surrounded by some of his faithful parishioners. He was 97 year old. The Cardinal Kung Foundation has learned that Bishop Fan suffered from a high fever several days before he died. He died at his home still under house arrest, a sentence that entailed strict surveillance by the government for most of the last two decades. The funeral arrangements for Bishop Fan has not been finalized, but will be limited for only two days as dictated by the government.

Upon his death, an underground priest immediately offered a Mass for the repose of the soul of Bishop Fan in Bishop's own apartment. Shortly after the completion of the Mass, which was attended by a few underground Catholics, several Shanghai government officials arrived as the result of their surveillance. They ordered the immediate transfer of the body of Bishop Fan to a funeral home.

Born in 1918, Bishop Fan was baptized a Catholic in 1932, joined the Society of Jesus in 1938, ordained a priest in 1951, and later was arrested in 1955 on September 8 at the same night when Bishop Kung was arrested by the communist government. He spent over 30 years in jail and labor camp since 1955. He was clandestinely ordained coadjutor Bishop of Shanghai on February 27, 1985 by the Bishop of Qinghai while his predecessor, then Bishop Ignatius Kung, remained under the Chinese government arrest in jail. Upon the death of Cardinal Kung in March 2000, Bishop Fan was appointed the legitimate successor of Cardinal Kung by Blessed Pope John Paul II. However, Bishop Fan was forbidden to carry out his pastoral duty as the government put him under house arrest almost immediately - a sentence that he served until the day he died. At approximately the same time as Bishop Fan's appointment, the Chinese government appointed Aloysius Jin as the Bishop of Shanghai of the Catholic Patriotic Association without Papal mandate in 1985. The government never recognized Bishop Fan as the Bishop of Shanghai.

The Catholic Church in China

The Catholic Church in China has been divided into two groups since 1957. One group, commonly noted as the open Church, is founded and controlled by the Chinese government through the Patriotic Association which, as characterized by Pope Benedict XVI, is an organization "independent of the Holy See, in the religious sphere" and "is incompatible with Catholic doctrine". Another group, commonly referred to as the underground Church, has been strictly faithful and obedient to the Pope, while suffering severe repercussions as a consequence of this obedience. Bishop Fan is the most recent Bishop of Shanghai of the underground Church in Shanghai. Bishop Jin was later accepted by Vatican as an auxiliary bishop of Shanghai. Both are now deceased. For the comparison of these two bishops, please read "A Tale of Two Bishops" written by Marc A Thiessen who was a former speechwriter for President George W. Bush. You may read this article at http://www.crisismagazine.com/2009/a-tale-of-two-bishops-2 .

Currently, Shanghai has an auxiliary bishop, Thaddeus Ma Daqin was ordained bishop on July 7, 2012 with the approval of both Pope Benedict XVI and the Chinese government. During his ordination Mass, Bishop Ma courageously declared that he would no longer hold any position in the Chinese Catholic Patriotic Association in order to "focus on the pastoral work and evangelization". He was promptly arrested and was placed under house arrest at Sheshan Seminary. The government and the Catholic Patriotic Association later rescinded the ordination of Bishop Ma. He is still under house arrest at the Sheshan Seminary.

As both Bishop Aloysius Jin LuXian and Bishop Joseph Fan Zhongliang are deceased, the Cardinal Kung Foundation appeals to the Chinese government to release Bishop Ma immediately so that the Catholic Diocese of Shanghai will have a bishop to lead their ministry. By reinstating Bishop Ma to his rightful office, China will be taking an important step forward in honoring religious freedom, a right that is guaranteed by the Chinese Constitution. We urge others to raise their voices and join in this appeal - both organizations advocating for religious freedom and human rights in China, and national governments where freedom of religious belief is central to their current practices or founding tenets.

Published in Remnant Articles
back to top
Last modified on Monday, March 17, 2014
Tweet
More in this category: « Is Putin Puttin’ Us On? The Mass Debate: If it’s just about smells and bells, then the hell with it! »