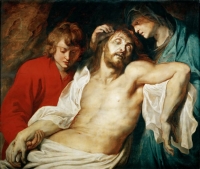 Reality television is a genre of television programing that documents unscripted situations and actual occurrences, often highlighting conflict and drama. Typical reality programs involve survival situations, family feuds, repo companies, pawn stores and much more. The most popular reality program in the history of cable television is Duck Dynasty, which is watched weekly by millions of Americans and has brought in hundreds of millions in sales of merchandize. Duck Dynasty follows the everyday lives of a southern family that made a fortune in hand-made duck calls. Their company is called Duck Commander.

Even if you do not watch reality shows you may have heard of the squawk raised against the family patriarch who founded the Duck Commander company for his recent remarks regarding homosexuality:

Contrast what the Duck Dynasty patriarch had to say on this subject with that of the Bishop of Rome:

"If someone is gay and he searches for the Lord and has good will, who am I to judge...A person once asked me if I approved of homosexuality. I replied with another question: "Tell me: when God looks at a gay person, does he endorse the existence of this person with love, or reject and condemn this person?" We must always consider the person…We cannot insist only on issues related to abortion, gay marriage and the use of contraceptive methods. This is not possible."

For strong statements against homosexuality, the patriarch was bounced from his reality program [and subsequently reinstated by A&E after massive protest]. For soft comments regarding homosexuality, on the other hand, the Pope was named “Person of the Year.” There is something terribly wrong in the Church when a Duck Commander begins to sound more Catholic than the Pope.

But papal ambiguity is no longer limited to comments upon moral matters; we are now subjected to such statements related to faith. Incredibly, even for this papacy, Pope Francis said the following of Our Lady in a recent sermon:

"The Gospel does not tell us anything: if she spoke a word or not… She was silent, but in her heart, how many things told the Lord! ‘You, that day, this and the other that we read, you had told me that he would be great, you had told me that you would have given him the throne of David, his forefather, that he would have reigned forever and now I see him there!’ Our Lady was human! And perhaps she even had the desire to say: ‘Lies! I was deceived!’ John Paul II would say this, speaking about Our Lady in that moment. But she, with her silence, hid the mystery that she did not understand and with this silence allowed for this mystery to grow and blossom in hope." (December 20, 2013)

Is the Bishop of Rome kidding us? Whether intended or not, this statement is scandalous. The idea that the Blessed Mother might possibly have desired to accuse God of a lie—making God a liar—is so utterly contrary to Sacred Scripture, Sacred Tradition, Marian piety and Catholic theology that not even a bible believing Duck Commander would make this assertion. Even Neo-Catholics may struggle to spin this whopper!

Even apart from the egregious error regarding Mary, there is another error by Pope Francis, regarding Pope John Paul II, whom he alleges—falsely—to have said the same thing about the Mother of God:

"And now, standing at the foot of the Cross, Mary is the witness of the complete negation of these words. On that wood of the Cross her Son hangs in agony as one condemned…How great, how heroic then is the obedience of faith shown by Mary in the face of God's "unsearchable judgments"! How completely she "abandons herself to God" without reserve, offering the full assent of the intellect and the will" to him whose "ways are inscrutable" And how powerful too is the action of grace in her soul, how all-pervading is the influence of the Holy Spirit and of his light and power! Through this faith Mary is perfectly united with Christ in his self- emptying. At the foot of the Cross Mary shares through faith in the shocking mystery of this self-emptying." (Redemptoris Mater, 18)

In fact, it is readily apparent that Pope John Paul wrote just the opposite of Pope Francis, namely, that Mary had a heroic obedience of faith, not the deep-down doubt suggested by Pope Francis. If Francis were correct—and he is not—then there would be little merit won beneath the Cross by the doubting Mother. Instead of the Pieta, imagine Mater Dubita with fists clenched, screaming interiorly “Lies!”

But that is unimaginable, as is this papal meditation on this mystery. Speaking of which, let’s hope and pray that there are not more modernist mysteries to be added to the rosary. They may be called the Doubting Mysteries and include: Zechariah doubts the Archangel, Joseph doubts Mary, John the Baptist doubts Jesus, Mary doubts God, Jesus doubts the Father and Thomas doubts the Apostles.

One really wonders how the Pope could get this wrong. In effect, he has confused the New Eve with the Fallen Eve. Mary is the model of faith and obedience. Never mind that Mary was personally familiar with the prophecy of Simeon, that a sword of sorrow would pierce her heart; never mind that Mary was certainly aware of the prophetic words of her own Son, who repeatedly foretold that the Son of Man would be crucified and then rise from the dead.

If anyone thinks that I am being too hard on Pope Francis, remember that in this case, whether intended or not, the Bishop of Rome has messed with our Mother. The Pope concluded his sermon saying, “May the Lord give all of us the grace to love the silence.” Based on what we have heard, many of us would love a little more papal silence. When it comes to the matter of mystery, there is one mystery that defines this papacy: the mystery of Pope Francis and what he really means.

Remnant Editor’s Note: The following few quotations provide the traditional understanding on the mystery of Mary’s role in the Incarnation and crucifixion of her Son—an understanding which we hope and even presume Bishop of Rome Francis intended to reiterate, if in vain, in his confusing sermon of December 20, 2013. Credit to Rorate Caeli for compiling these quotes:

Venerable Fulton Sheen:“From the moment she heard Simeon’s words, she would never again lift the Child’s hands without seeing a shadow of nails on them; every sunset would be a blood-red image of His Passion.”

St. Ambrose: “His mother stood before the Cross, and, while the men fled, she remained undaunted... She did not fear the torturers... His mother offered herself to His persecutors."

St. Bernard: "But perhaps someone will say, 'Did she not know ahead of time that her Son was going to die?' Yes, undoubtedly."

St Bonaventure: "When she saw the love of the Eternal Father towards men to be so great that, in order to save them, He willed the death of His Son; and, on the other hand, seeing the love of the Son in wishing to die for us: in order to conform herself who was always and in all things united to the will of God to the excessive love of both the Father and the Son towards the human race, she also with her entire will offered, and consented to, the death of her Son, in order that we might be saved."

Fr. Reginald Garrigou-Lagrange: "She is at the foot of the Cross on Calvary, though all the Apostles, St John only excepted, have fled; she stands erect there, firm in her faith that her Son is the Son of God, that He is the Lamb of God Who is even then taking away the sins of the world, that though apparently defeated, He is Victor over Satan and sin, and that in three days He will conquer death by His resurrection. Mary's act of faith on Calvary was the greatest ever elicited on earth, for the hour was unspeakably dark and its object was the most difficult of all – that Jesus had won the greatest of victories by making the most complete of immolations. Her faith was aided then by the gifts of the Holy Ghost. By the gift of Understanding she read far into the revealed mysteries, far into their inner meaning, their harmony, their appropriateness, their consequences. She was particularly favoured in her understanding of the mysteries in which she herself had a part to play, such as the virginal conception of Christ, His Incarnation, and the whole economy of the Redemption. ... It was increased also by the fact that Mary was confirmed in grace and preserved free from every shortcoming – lack of confidence as well as presumption.”

Blessed Simon of Cassia: "While grieving, she rejoiced, that a sacrifice was offered for the Redemption of all, by which He Who was angry was appeased."

Pope Benedict XV: "She offered her Son so generously in sacrifice to satisfy the justice of God, that it may be said with reason that she cooperated in the salvation of the human race along with Christ."

Arnold of Bonneval: "Love for his Mother moved Christ. At that moment, Christ and Mary had but one single will, and both were equally offering a single holocaust to God: she with the blood of her heart; He with the blood of His body."

Alain de Lille: "The disciples' faith failed, but the firmness of the Virgin's faith was not diminished.''


Published in Remnant Articles
back to top
Last modified on Thursday, January 2, 2014
Tweet

More in this category: « The Trad Bash: From Neo-Atheism to Neo-Catholicism The Neo-Catholic Mantra: I’m Ok, You’re Ok »