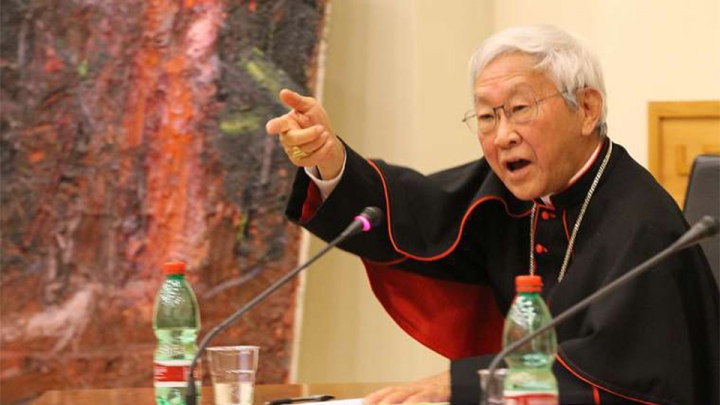 Cardinal Joseph Zen has added his voice to the growing number of cardinals opposing the suppression of private, individual Masses inside St. Peter’s Bascilica.

I hope the cowboy hat guys keep in mind that His Eminence is not some rad trad spouting off. He offers the New Mass, in fact. He's just a good man who's finding it nearly impossible not to admit the obvious about the "den of thieves" currently running the Church into the ground. He knows those thieves PERSONALLY, and he's trying to save us... from them. God bless you, Cardinal Zen.

Below is Cardinal Zen's full statement to Cardinal Robert Sarah, which appeared first on his blog:

Pain and indignation invade my heart to hear such incredible news: they have forbidden private masses in St. Peter’s!?

If it were not for the restrictions imposed by the coronavirus, I would take the first flight to come to Rome and kneel before the door of Santa Marta until the Holy Father had that edict withdrawn.

It was the thing that most strengthened my faith every time I came to Rome: at exactly seven o’clock you enter the sacristy (I almost always met the saintly man, the archbishop who later became Cardinal Paolo Sardi), a young priest comes forward and helps me put on my vestments, then they lead me to an altar (in the Basilica or in the grottoes, it makes no difference to me, we are in St. Peter’s Basilica!). I think these were the Masses that, in my life, I celebrated with greatest fervour and emotion, sometimes with tears, praying for our living martyrs in China (now abandoned and pushed into the bosom of the schismatic church by the “Holy See” [this is what the document of June 2019 looked like, as it had no signatures and was not reviewed by the Congregation for Doctrine]).

[Comment Guidelines - Click to view]
The Remnant values the comments and input of our visitors. It’s no secret, however, that trolls exist, and trolls can do a lot of damage to a brand. Therefore, our comments are heavily monitored 24/7 by Remnant moderators around the country.  They have been instructed to remove demeaning, hostile, needlessly combative, racist, Christophobic comments, and streams not related to the storyline. Multiple comments from one person under a story are also discouraged. Capitalized sentences or comments will be removed (Internet shouting).
The Remnant comments sections are not designed for frequent personal blogging, on-going debates or theological or other disputes between commenters. Please understand that we pay our writers to defend The Remnant’s editorial positions. We thus acknowledge no moral obligation whatsoever to allow anyone and everyone to try to undermine our editorial policy and create a general nuisance on our website.  Therefore, Remnant moderators reserve the right to edit or remove comments, and comments do not necessarily represent the views of The Remnant.
back to top
Last modified on Tuesday, March 30, 2021
Tweet