RORATE NAILS IT: Did Saints Oversee the Most Massive Sex Scandal in History? 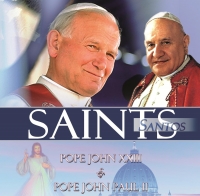 Commenting on the horrific revelations out of Pennsylvania this week, Rorate Caeli's New Catholic provides much-needed context for this massive scandal. Here's the 900-pound gorilla in the parlor:

The greatest part of the horrid episodes documented by the Grand Jury report happened in the pontificates of John XXIII, Paul VI, and John Paul II. Some happened before. But as the Church "opened itself to the world", according to the desire of John XXIII, worldly behaviors infiltrated the Church more and more. The horrid episodes represent only what could be found in just six dioceses of one state of one country: the putrefaction runs wide and deep.

How could John XXIII and John Paul II have been canonized? Their systematic failures in the naming of bishops were monstrous. How can Francis dare beatify and now canonize Paul VI, one of the worst popes in history, whose nominations throughout the world, and in the United States, managed to make what was bad truly awful?

Let us be honest: as administrators, John XXIII, Paul VI, and John Paul II were no saints. They may have been validly included in the list of saints, but their express-rite canonizations are shown, with each passing week, to have been horrible mistakes. A considerable period of time and long investigations of their grave omissions and of their disgraceful cover-up of perverted or irresponsible bishops should have taken place before any beatification procedure had ever been opened up.

The centralization of the administration of the Church went much deeper in their pontificates. They assumed the responsibility for each of these small faithful. They diluted the responsibility of bishops by encouraging and engorging the useless bureaucracies of the bishops' conferences. These little faithful, the children who were abused, were also THEIR failures, the failures of each one of them (and also of preceding and succeeding popes in a lesser degree, but these are either living or have not been beatified or canonized).

The time will surely come in the future to reassess these failed pontificates and to do all that is possible to reevaluate these hasty procedures, in which so much pain and so much failure and so much corruption were overlooked.

Remnant Comment: The Remnant covered this step by step and blow by blow every two weeks for fifty-one years, and we couldn't agree more with our friends at Rorate Caeli. In fact, out of near-frantic concern over the future ramifications of a rushed canonization of the very popes in charge during the massive clerical sex scandal, we were among those begging the Vatican to slow down their ill-advised papal saint-making factory. We got nowhere, of course, but we tried:

So now what's going to happen, as another dozen States announce plans to follow Pennsylvania's lead and investigate those responsible for sex crimes in the Catholic Church over the past fifty years?  What will they say about the big "santo subito" movement, so long on emotion and yet short on common sense?  We'll see. But what is beyond doubt is that in its rush to elevate its heroes and canonize its revolution, the Church of Vatican II has severely diminished not only the Church’s venerable canonization process, but also the very idea of sanctity itself. The Communion of Saints—not unlike the Roman Rite—has become something of a joke, complete with plenty of Halo Awards for the famous and decrees of excommunication for the faithful.

Remind me again: In the middle of this post-conciliar nuclear winter, why should any faithful Catholic feel obliged to defend the toxic "springtime" of the Second Vatican Council or its increasingly controversial architects?

[Comment Guidelines - Click to view]
The Remnant values the comments and input of our visitors. It’s no secret, however, that trolls exist, and trolls can do a lot of damage to a brand. Therefore, our comments are heavily monitored 24/7 by Remnant moderators around the country.  They have been instructed to remove demeaning, hostile, needlessly combative, racist, Christophobic comments, and streams not related to the storyline. Multiple comments from one person under a story are also discouraged. Capitalized sentences or comments will be removed (Internet shouting).
The Remnant comments sections are not designed for frequent personal blogging, on-going debates or theological or other disputes between commenters. Please understand that we pay our writers to defend The Remnant’s editorial positions. We thus acknowledge no moral obligation whatsoever to allow anyone and everyone to try to undermine our editorial policy and create a general nuisance on our website.  Therefore, Remnant moderators reserve the right to edit or remove comments, and comments do not necessarily represent the views of The Remnant.
back to top
Last modified on Wednesday, August 15, 2018
Tweet

More in this category: « Fr. Tom Rosica Lets Cat Out of Bag, Admits Francis 'Breaks Catholic Tradition Whenever He Wants' Remnant Columnist Nails It on The World Over »