Speaking of Racists: Hey, Ho, Sanger Square Has To Go! 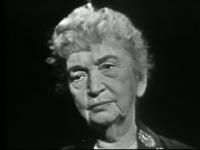 A petition is circulating to rename the racisit Margaret Sanger Square in New York City:

Since Americans are expressing their anger at historical figures with racist legacies, it is high time that 'Margaret Sanger Square' be renamed. Sanger was the founder of Planned Parenthood, a murderous organization which has aborted over 60 million unborn babies, mostly African-American children. Sanger once referred to African Americans as "human weeds".

It needs 99,924 signatures by September 14, 2017, in order to get a response from the White House. Sign the petition HERE

REMNANT COMMENT:  The woman is straight up creepy, too.  But besides that, I'm offended by her racism, her hate and her genocidal campaign against my species.  I'm quite sure our friends on the Left will hop to it and rename that Square now that they know how deeply offended I am by this. Isn't that how it works?  Anyway, check this nutter out:

[Comment Guidelines - Click to view]
The Remnant values the comments and input of our visitors. It’s no secret, however, that trolls exist, and trolls can do a lot of damage to a brand. Therefore, our comments are heavily monitored 24/7 by Remnant moderators around the country.  They have been instructed to remove demeaning, hostile, needlessly combative, racist, Christophobic comments, and streams not related to the storyline. Multiple comments from one person under a story are also discouraged. Capitalized sentences or comments will be removed (Internet shouting).
The Remnant comments sections are not designed for frequent personal blogging, on-going debates or theological or other disputes between commenters. Please understand that we pay our writers to defend The Remnant’s editorial positions. We thus acknowledge no moral obligation whatsoever to allow anyone and everyone to try to undermine our editorial policy and create a general nuisance on our website.  Therefore, Remnant moderators reserve the right to edit or remove comments, and comments do not necessarily represent the views of The Remnant.
back to top
Last modified on Tuesday, August 22, 2017
Tweet