Christmas in the Trenches, The True Story

(This article was published in The Remnant in 2006 after having first appeared on the Your Guide to 20th Century History website. It is reproduced here with the permission of the author. The original song

by John McCutcheon is well worth listening to as you read this incredible story from a day and age not so very far removed from our own but, alas, fading in every way from the consciousness of "grown up" and "enlightened" men who've lost sight of God, Country and even who and what they are anymore-- much less the true meaning of Christmas. MJM)

Though World War I had been raging for only four months, it was already proving to be one of the bloodiest wars in history. Soldiers on both sides were trapped in trenches, exposed to the cold and wet winter weather, covered in mud, and extremely careful of sniper shots. Machines guns had proven their worth in war, bringing new meaning to the word "slaughter."

In a place where bloodshed was nearly commonplace and mud and the enemy were fought with equal vigor, something surprising occurred on the front for Christmas in 1914. The men who lay shivering in the trenches embraced the Christmas spirit. In one of the truest acts of peace to men of goodwill, soldiers from both sides in the southern portion of the Ypres Salient set aside their weapons and hatred, if only temporarily, and met in No Man's Land.

After the assassination of Archduke Franz Ferdinand on June 28, 1914, the world was plunged into war. Germany, realizing they were likely to face a two-front war, attempted to defeat the western foes before the Russians were able to mobilize their forces in the East (estimated to take six weeks), using the Schlieffen Plan.
Though the Germans had made a strong offensive into France, French, Belgian, and British forces were able to halt them. However, since they were not able to push the Germans out of France, there was a stalemate and both sides dug into the earth creating a large network of trenches.

Once the trenches were built, winter rains tried to obliterate them. The rains not only flooded the dug-outs, they turned the trenches into mud holes – a terrible enemy in and of itself.

·         It had been pouring, and mud lay deep in the trenches; they were caked from head to foot, and I have never seen anything like their rifles! Not one would work, and they were just lying about the trenches getting stiff and cold. One fellow had got both feet jammed in the clay, and when told to get up by an officer, had to get on all fours; he then got his hands stuck in too, and was caught like a fly on a flypaper; all he could do was look round and say to his pals, 'For Gawd's sake, shoot me!' I laughed till I cried. But they will shake down, directly they learn that the harder one works in the trenches, the drier and more comfortable one can keep both them and oneself.1

The trenches of both sides were only a few hundred feet apart, buffered by a relatively flat area known as "No Man's Land." The stalemate had halted all but a scattered number of small attacks; thus, soldiers on each side spent a large amount of time dealing with the mud, keeping their heads down in order to avoid sniper fire, and watching carefully for any surprise enemy raids on their trench. 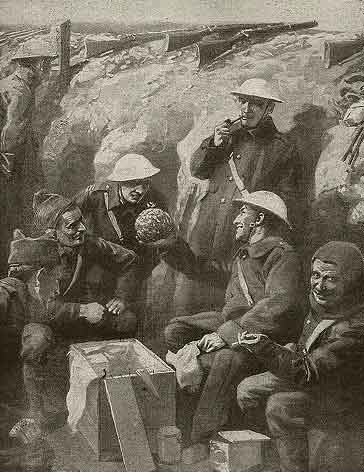 Restless in their trenches, covered in mud, and eating the same rations every day, some soldiers began to wonder about the un-seen enemy, men declared monsters by propagandists.

·   We hated their guts when they killed any of our friends; then we really did dislike them intensely. But otherwise we joked about them and I think they joked about us. And we thought, well, poor so-and-sos, they're in the same kind of muck as we are.2

The uncomfortableness of living in trenches coupled with the closeness of the enemy who lived in similar conditions contributed to a growing "live and let live" policy. Andrew Todd, a telegraphist of the Royal Engineers, wrote of an example in a letter:

·         Perhaps it will surprise you to learn that the soldiers in both lines of trenches have become very 'pally' with each other. The trenches are only 60 yards apart at one place, and every morning about breakfast time one of the soldiers sticks a board in the air. As soon as this board goes up all firing ceases, and men from either side draw their water and rations. All through the breakfast hour, and so long as this board is up, silence reigns supreme, but whenever the board comes down the first unlucky devil who shows even so much as a hand gets a bullet through it.3

Sometimes the two enemies would yell at each other. Some of the German soldiers had worked in Britain before the war and asked about a store or area in England that an English soldier also knew well. Sometimes they would shout rude remarks to each other as a way of entertainment. Singing was also a common way of communication.

·         During the winter it was not unusual for little groups of men to gather in the front trench, and there hold impromptu concerts, singing patriotic and sentimental songs. The Germans did much the same, and on calm evenings the songs from one line floated to the trenches on the other side, and were there received with applause and sometimes calls for an encore.4

After hearing of such fraternization, General Sir Horace Smith-Dorrien, commander of the British II Corps, ordered:

·         The Corps Commander, therefore, directs Divisional Commanders to impress on all subordinate commanders the absolute necessity of encouraging the offensive spirit of the troops, while on the defensive, by every means in their power. Friendly intercourse with the enemy, unofficial armistices (e.g. 'we won't fire if you don't' etc.) and the exchange of tobacco and other comforts, however tempting and occasionally amusing they may be, are absolutely prohibited.5

Christmas at the Front

On December 7, 1914, Pope Benedict XV suggested a temporary hiatus of the war for the celebration of Christmas. Though Germany readily agreed, the other powers refused.

Even without a cessation of war for Christmas, family and friends of the soldiers wanted to make their loved ones' Christmas special. They sent packages filled with letters, warm clothing, food, cigarettes, and medications. Yet what especially made Christmas at the front seem like Christmas were the troves of small Christmas trees.

·         Time and again during the course of that day, the Eve of Christmas, there were wafted towards us from the trenches opposite the sounds of singing and merry-making, and occasionally the guttural tones of a German were to be heard shouting out lustily, 'A happy Christmas to you Englishmen!' Only too glad to show that the sentiments were reciprocated, back would go the response from a thick-set Clydesider, 'Same to you, Fritz, but dinna o'er eat yourself wi' they sausages!'6

In other areas, the two sides exchange Christmas carols.

·         They finished their carol and we thought that we ought to retaliate in some way, so we sang 'The first Noël', and when we finished that they all began clapping; and then they struck up another favourite of theirs, 'O Tannenbaum'. And so it went on. First the Germans would sing one of their carols and then we would sing one of ours, until when we started up 'O Come All Ye Faithful' the Germans immediately joined in singing the same hymn to the Latin words 'Adeste Fidéles'. And I thought, well, this was really a most extraordinary thing – two nations both singing the same carol in the middle of a war.7 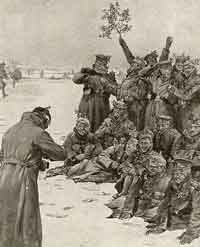 This fraternization on Christmas Eve and again on Christmas was in no way officially sanctified nor organized. Yet, in numerous separate instances down the front line, German soldiers began yelling over to their enemy, "Tommy, you come over and see us!"8 Still cautious, the British soldiers would rally back, "No, you come here!"

In some parts of the line, representatives of each side would meet in the middle, in No Man's Land.

·         We shook hands, wished each other a Merry Christmas, and were soon conversing as if we had known each other for years. We were in front of their wire entanglements and surrounded by Germans – Fritz and I in the centre talking, and Fritz occasionally translating to his friends what I was saying. We stood inside the circle like streetcorner orators.

Soon most of our company ('A' Company), hearing that I and some others had gone out, followed us . . . What a sight - little groups of Germans and British extending almost the length of our front! Out of the darkness we could hear laughter and see lighted matches, a German lighting a Scotchman's cigarette and vice versa, exchanging cigarettes and souvenirs. Where they couldn't talk the language they were making themselves understood by signs, and everyone seemed to be getting on nicely. Here we were laughing and chatting to men whom only a few hours before we were trying to kill!9

Some of those who went out to meet the enemy in the middle of No Man's Land on Christmas Eve or on Christmas Day negotiated a truce: we won't fire if you won't fire. Some ended the truce at midnight on Christmas night, some extended it until New Year's Day.

One of the main reasons Christmas truces were negotiated was in order to bury the dead. Though some had died recently, there were corpses out in No Man's Land that had been there for several months. Along with the revelry that celebrated Christmas was the sad and somber job of burying their fallen comrades. On Christmas day, British and German soldiers appeared on No Man's Land and sorted through the bodies. In just a few rare instances, joint services were held for both the British and German dead.

Yet many soldiers enjoyed meeting the un-seen enemy and were surprised to discover that they were more alike than he had thought. They talked, shared pictures, exchanged items such as buttons for food stuffs. An extreme example of the fraternization was a soccer game played in the middle of No Man's Land between the Bedfordshire Regiment and the Germans. A member of the Bedfordshire Regiment produced a ball and the large group of soldiers played until the ball was deflated when it hit a barbed wire entanglement.

This strange and unofficial truce lasted for several days, much to the dismay of the commanding officers. This amazing showing of Christmas cheer was never again repeated and as World War I progressed, the story of Christmas 1914 at the front became something of a legend.

·         This experience has been the most practical demonstration I have seen of 'Peace on earth and goodwill towards men.10

(The present article first appeared on the Your Guide to 20th Century History website.  It is being reproduced here with the permission of the author MJM.)

Winter, Jay and Blaine Baggett. The Great War: And the Shaping of the 20th Century. New York: Penguin Books, 1996.

Published in Remnant Articles
back to top
Last modified on Saturday, December 28, 2013
Tweet