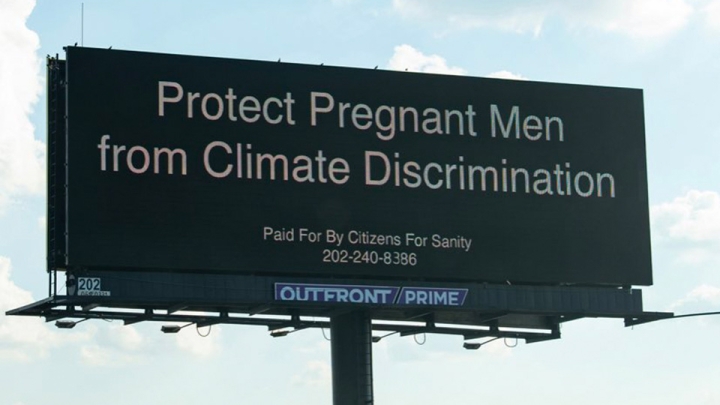 In recent months, a group called “Citizens for Sanity” began running newspaper and billboard advertisements intended to “return common sense to America” by highlighting the lunacy of Progressive policies:

Devastatingly, Biden and his fellow Progressives have given Citizens for Sanity sufficient examples of utter madness to create as many advertisements as their budget and time permit. The mind-numbingly insane Covid policies alone could generate enough material to fill the billboards of most major cities.

Citizens for Sanity faces an uphill battle these days if it wants to convince anyone to apply logic and reason to oppose the woke ideologies threatening America and the rest of the world.

As worthy as their efforts appear, though, Citizens for Sanity faces an uphill battle these days if it wants to convince anyone to apply logic and reason to oppose the woke ideologies threatening America and the rest of the world. The enemies of truth and goodness have spent decades destroying the intellects and wills of those who have eagerly consumed the poisoned education, entertainment, and news that has now become ubiquitous.

In his Ideas Have Consequences, Richard Weaver already observed the disease that has reduced society to the condition of moral idiocy, which Citizens for Sanity seeks to remedy:

“There is ground for declaring that modern man has become a moral idiot. So few are those who care to examine their lives, or to accept the rebuke which comes of admitting that our present state may be a fallen state, that one questions whether people now understand what is meant by the superiority of an ideal. One might expect abstract reasoning to be lost upon them; but what is he to think when attestations of the most concrete kind are set before them, and they are still powerless to mark a difference or to draw a lesson? For four centuries every man has been not only his own priest but his own professor of ethics, and the consequence is an anarchy which threatens even that minimum consensus of value necessary to the political state.”

Weaver wrote this in 1948, when so many of the Progressive policies were still unthinkable. If he saw that the “minimum consensus of value necessary to the political state” was threatened almost seventy-five years ago, how would he diagnose the evils we see today?

The resulting erosion of consensus amongst Catholics has greatly facilitated the worldwide calamity we experience today, in which we see a new, anti-Christian consensus of value forming.

Weaver was not Catholic, but even if he had been he would not have foreseen the Second Vatican Council, which exacerbated the erosion of consensus of value even among Catholics. By the time the Council closed in 1965, the groundwork had been laid for the cafeteria style Catholicism we find today, in which so many nominal Catholics have effectively become Protestants who “follow the pope.” And, fittingly, many of these nominal Catholics see no problem with Francis, who appears to believe the world no longer needs Catholicism.

The resulting erosion of consensus amongst Catholics has greatly facilitated the worldwide calamity we experience today, in which we see a new, anti-Christian consensus of value forming. As Michael Matt described in his recent Remnant TV video, Francis and King Charles III lead the way in promoting this new consensus. In many respects, we can sense the same dystopian nightmare that Monsignor Robert Hugh Benson had Pope Sylvester III describe in Lord of the World, his fictional account of the reign of the Antichrist:

“And was it conceivable, His earthly mind demanded, that He and His college of twelve and His few thousands should be right, and the entire consensus of the civilized world wrong? It was not that the world had not heard the message of the Gospel; it had heard little else for two thousand years, and now pronounced it false—false in its external credentials, and false therefore in its spiritual claims. It was a lost cause for which He suffered; He was not the last of an august line, He was the smoking wick of a candle of folly; He was the reductio ad absurdam of a ludicrous syllogism based on impossible premises. He was not worth killing, He and His company of the insane—they were no more than the crowned dunces of the world’s school. Sanity sat on the solid benches of materialism.”

The “entire consensus of the civilized world” was against those who maintained the Catholic Faith; Catholics were considered insane, while the world’s “sanity sat on the solid benches of materialism.” We have not yet reached this point, but it approaches so rapidly that we can no longer avoid it by relying solely on our natural abilities to persuade the world of its folly.

Our only hope to effectively counter the demonic insanity that suffocates us is to return to the true Catholic Faith that the globalists have tried so hard to undermine.

Our only hope to effectively counter the demonic insanity that suffocates us is to return to the true Catholic Faith that the globalists have tried so hard to undermine. But, as Dom François de Sales Pollien (1853-1936) wrote in his Lived Christianity, even faithful Catholics can become “useless and falsified men” if we fail to give God the proper place in our lives:

“What seems impossible to me is that you have faith, or, to put it better, that you have reason, and that you nonetheless continue to give God the place you have given Him in your life. Being logical with yourself, you will either fulfill your duty to the end, giving full and complete satisfaction to your reason and your faith, or else you will deny God, and then you will talk nonsense; that is, you will lie to yourself, you will lie to your faith and your reason, you will live by expedients and half measures, you will be a useless and falsified man, your life will have neither logic nor truth, you will only be one vulgar juggler among many on the world’s stage. You choose.”

He wrote this decades before Vatican II convinced so many Catholics to focus on man rather than God, and it seems that it is precisely what we need to hear today. We must choose: will we be just another “vulgar juggler among many on the world’s stage,” or will we be true Christians? It all depends on the place we give God in our lives.

But of course Dom Pollien was not saying anything new. Jesus made it abundantly clear that we must place the will of God over our own. If we actually believe the Faith we profess, we surely know that God is correct in this matter (as all others), and so we are fools when we put our own desires and interests over those of God. As Dom Pollien wrote, we then become “useless and falsified men.” If that is what we are, then we cannot possibly stand a chance against Satan and his globalist madmen.

What do we choose? Catholic sanity demands that we put God first. All the saints lived by this simple reality. And it seems that God is allowing the leaders of the Church and world to become more dangerously insane and wicked by the day, so that we too will realize that we must do all we can to put God first so that we can say with St. Paul, “I can do all things in Him who strengthens me” (Philippians 4:13).

As Dom Pollien wrote, this is what real Christian men will do when faced with the unholy effeminacy that Francis and his collaborators represent:

“Come on! Be a generous and sincere man, tell God that He can rely on you, and you on Him. Be resolute in everything, and you will see that God will direct you. You cannot imagine how simple this great work is. . . . The great Architect of this building can do everything, because, as you will see, this Architect is God.”

It is very simple, but we have to choose. May the Blessed Virgin Mary, who guided St. John to the Cross when he was tempted to flee, help us to stand with Christ.

[Comment Guidelines - Click to view]
The Remnant values the comments and input of our visitors. It’s no secret, however, that trolls exist, and trolls can do a lot of damage to a brand. Therefore, our comments are heavily monitored 24/7 by Remnant moderators around the country.  They have been instructed to remove demeaning, hostile, needlessly combative, racist, Christophobic comments, and streams not related to the storyline. Multiple comments from one person under a story are also discouraged. Capitalized sentences or comments will be removed (Internet shouting).
The Remnant comments sections are not designed for frequent personal blogging, on-going debates or theological or other disputes between commenters. Please understand that we pay our writers to defend The Remnant’s editorial positions. We thus acknowledge no moral obligation whatsoever to allow anyone and everyone to try to undermine our editorial policy and create a general nuisance on our website.  Therefore, Remnant moderators reserve the right to edit or remove comments, and comments do not necessarily represent the views of The Remnant.
back to top
Last modified on Monday, September 19, 2022
Tweet

More in this category: « TERRA CARTA: Kazakhstan and the New World Religion DECLARATION of His Excellency Carlo Maria Viganò regarding the “blessings” of homosexual couples celebrated in Belgium »