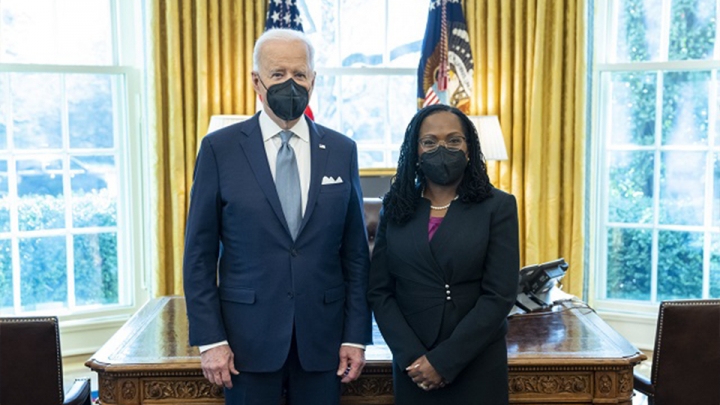 Joe Biden and the Democrats pitched her as a Black woman. But that is a canard. Ketanji Brown Jackson is a Trojan horse for anti-humanism.

On Tuesday, March 22, after Judge Jackson had deflected two of the Senator’s previous questions relating to a ruling by the late Justice Ruth Bader Ginsburg on the “enduring” significance of differences between the two sexes, Senator Blackburn put the matter in the simplest of terms:

“Can you provide a definition for the word, ‘woman’?”

Judge Jackson answered, “No. I can’t.”

Blackburn, and the conservative punditry, were stunned. They shouldn’t have been, though. The inability of the American elite to define “woman” is in no way surprising. Confusion about sex is the latest in the elite’s intentional destruction of human society by sowing radical discord about human beings. For a group that has long defined “person” as “clump of cells” or “product of conception,” the refusal to say what makes a female person a woman is a completely consistent reiteration of the hatred for humanity which—and here’s a definition you can work with—defines the American elite.

Judge Jackson’s stupefaction in the face of elemental anatomy is an entirely unremarkable and by-now-routine symptom of the diabolical disordering of our country.

Judge Jackson’s stupefaction in the face of elemental anatomy (despite her claims to lack the biological specialization necessary to comprehend it) is not evidence of stupidity or psychosis. It is an entirely unremarkable and by-now-routine symptom of the diabolical disordering of our country. At this point, if you can define the word, “woman,” you are a fundamentalist, a hateful bigot. The cognitive grasp of physical reality is the rare exception, not the rule.

What is striking about the Blackburn-Jackson exchange is not its content. Rather, what stands out is that the exchange took place in a political setting, in a Senate hearing for deciding whether to approve someone for a seat on the Supreme Court. I was surprised to find that, despite Judge Jackson’s posthuman stance—her confessed inability to say what people are—we are still going through the charade of politics and rule of law. For what Judge Jackson glibly admits to is total anarchy, the upending of the law and the demolition of the political order.

It is posthumanism which goes farthest toward explaining the breakdown of law and order in the United States in recent years.

Judge Jackson’s posthumanism—the ideology she shares with her fellow Ivy League elite and Beltway radicals—is not just a theory which can be digested by law and turned into legislative prerogative, the way that other ideologies such as Marxism and Progressivism have been before. Posthumanism is the end of legislation, the death of the political process. Posthumanism obviates the necessity for the political ab initio. Posthumanism makes the political impossible, full stop. Posthumanism is postpolitical, is the ruination of the interaction of human beings.

Politics is a human art. Only humans do it. By definition, it requires humans to accomplish. There are no stump speeches by groundhogs or manatees. Only humans shake hands and tell lies to get votes. Only humans use logic and emotion to sway crowds and build factions. Only humans make written and contestable laws. If you do not have people in a society, people with bodies and minds and souls who accept that there is no alternative to shared life within a framework of the material universe, then you do not have a society at all. You have Hell. You have posthumanism, the demonic death-wish for the human race.

But in reality legal practitioners, and the American elite in general, are not pro-minority. They are anti-human.

Posthumanism is the key to understanding the zeitgeist in our country today. It is posthumanism which goes farthest toward explaining the breakdown of law and order in the United States in recent years.

This is not always clear, however. Many point to race as the context of social breakdown, for instance. This is understandable given that racial justice has been the slogan of many “mostly peaceful protests” and other forms of bedlam in American streets during the past half-decade. As police officers and business owners were shot, stores looted, and cities torched, the academic-media-government complex told us that it was all for the sake of racial reform.

But race has been the smokescreen behind which the human person has been dismantled. Race is the cloak over posthumanism’s naked hatred of human beings. District attorneys claim to be pro-minority when they overlook—and even celebrate—the most heinous of crimes. But in reality legal practitioners, and the American elite in general, are not pro-minority. They are anti-human. It is the crime these DAs are after, the suffering that crime causes which is the reward for the posthumanist in full rancid flower. Virtue signaling is just the saccharine coating which helps the misanthropy (and, especially of late, the rank misogyny) go down among those watching the whole spectacle play out on TV.

Jackson is a Trojan horse for anti-humanism.

One need look no farther than the career of Ketanji Brown Jackson to see how anti-humanism looks in practice, beneath the racialist facade. Joe Biden and the Democrats pitched her as a Black woman. But that is a canard. Jackson is a Trojan horse for anti-humanism. In a 1996 Harvard Law Review note, for example, Jackson cast doubt on the legitimacy of sex-offender registries. In 2012, Judge Jackson, who at the time was the vice-chair of the United States Sentencing Commission, disagreed with an expert witness that collecting and possessing pornographic images of children is done by pedophiles. In 2013, Judge Jackson acted on her confusion about pedophilia and child pornography by imposing an extraordinarily lenient sentence on a man convicted of searching for and viewing images of the sexual abuse of minors.

It is not just Ketanji Brown Jackson, of course. Her fellow elites hate humans, too. Any transgression of the human person is welcome among Jackson’s peers. The academic-media-government complex tells us that William Thomas, a man in a woman’s bathing suit, is a woman. The American Civil Liberties Union tells us that men can get pregnant. Mickey Mouse tells us that little boys can be little girls, and vice versa. Joe Biden agrees. The American elite are thoroughly possessed of a diabolical ideology. Everywhere you turn, there you see it—the elite hates you, hates me, hates those who continue to call themselves and their brothers and sisters human beings.

When the ideology of a ruling elite is anti-human, then all politics breaks down.

There are consequences to this that we are only beginning to understand. When the ideology of a ruling elite is anti-human, then all politics breaks down. This is what we have in the United States today. And it will get much, much worse very soon. Confirming judges in committee chambers is a farce which will rapidly come to an end. There is already no need to pretend that we have laws which are meant for human flourishing. There is no such thing as human flourishing, because there are no such things anymore as human beings.

This is what the Great Reset means. This is why Francis wants open borders and satanic “vaccines.” The devil hates us, hates order and goodness. He craves our corruption and defilement, and the Vatican is happy to comply. The first Great Reset was satan’s. All that follows is of the same dark undertow.

Francis has chosen the globalists over the human race and the God Who loved us into existence.

Including Francis, who has chosen the globalists over the human race and the God Who loved us into existence.

Judge Ketanji Brown Jackson doesn’t know what male and female are. How could she? She works for the same master as does Jorge “Pachamama” Bergoglio and James “Sodom” Martin. There are no committees and oversight in Hell. There is only hatred, the inversion of God’s grace, the destruction of the human person whom the devil has hated from the beginning.

In a world in which the human is mocked and denied, there can be no reasoned discourse, no open and honest debate. In a posthuman, post-political world, there is only the din of the diabolically-disoriented rabble, and the barking and shrieking of the ungodly few who rule over them.

Watch the Latest from RTV - GloBA’ALism: Is Pope Francis Dancing with the Devil?

[Comment Guidelines - Click to view]
The Remnant values the comments and input of our visitors. It’s no secret, however, that trolls exist, and trolls can do a lot of damage to a brand. Therefore, our comments are heavily monitored 24/7 by Remnant moderators around the country.  They have been instructed to remove demeaning, hostile, needlessly combative, racist, Christophobic comments, and streams not related to the storyline. Multiple comments from one person under a story are also discouraged. Capitalized sentences or comments will be removed (Internet shouting).
The Remnant comments sections are not designed for frequent personal blogging, on-going debates or theological or other disputes between commenters. Please understand that we pay our writers to defend The Remnant’s editorial positions. We thus acknowledge no moral obligation whatsoever to allow anyone and everyone to try to undermine our editorial policy and create a general nuisance on our website.  Therefore, Remnant moderators reserve the right to edit or remove comments, and comments do not necessarily represent the views of The Remnant.
back to top
Last modified on Wednesday, April 6, 2022
Tweet

More in this category: « No Country for Bold Men WE WILL NOT DEPRIVE OUR CHILDREN: International Group of Catholic Lay Leaders Call for Revocation of Traditionis Custodes »