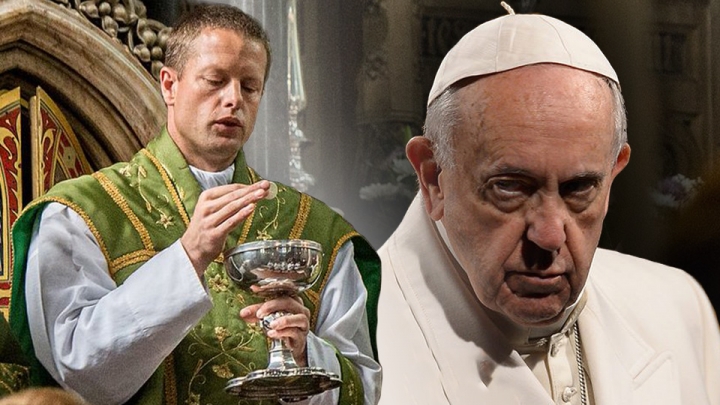 “Sit back and consider it: the highest power on earth is attacking the greatest good on earth, precisely when it’s his job to defend and preserve tradition and to pass it on to the next generation.” - Fr. James Mawdsley

A British traditional Catholic priest who was once imprisoned and tortured in a Burmese jail is openly challenging Pope Francis’ efforts to suppress the Church’s ancient Roman liturgy.

In a 9-minute video titled “Why withstand Pope Francis publicly?” [watch it below] Father James Mawdsley, formerly a priest of the Fraternity of St. Peter (FSSP), asserts that in his letter accompanying Traditionis Custodes, Francis “declared his intention to eradicate the traditional liturgy” and “impossibly claimed that the Novus Ordo constitutes the unique expression of the lex orandi of the Roman Rite.”

“Caiaphas was High Priest of the Old Covenant when he arranged for Jesus’ execution. Now shall the Vicar of Christ try to have Christ’s memorial destroyed?” he asks.

“What is happening is evil beyond description,” Father Mawdsley says. “Sit back and consider it: the highest power on earth is attacking the greatest good on earth, precisely when it’s his job to defend and preserve tradition and to pass it on to the next generation.”

Fr. Mawdsley is no stranger to challenging oppression. At the age of 27, he spent 14 months in solitary confinement in Burma’s infamous Kengtung prison and was brutally beaten for challenging the country’s regime for its human rights violations.

He also challenges Congregation for Divine Worship Prefect Archbishop Arthur Roche’s claim in a recent interview with Catholic News Service that “the negative reaction to Traditionis Custodes has been very little,” saying to the archbishop, “What do you expect when a reign of terror is unleashed?

“Of course, people are keeping their heads down,” he continues. “Many clerics do not say openly what they think because they are afraid of vicious reprisals” such as confirmations or baptisms being “banned” in the Old Rite, or being told they can no longer celebrate the traditional Mass.

No Stranger to Oppression

Fr. Mawdsley is no stranger to challenging oppression. At the age of 27, he spent 14 months in solitary confinement in Burma’s infamous Kengtung prison and was brutally beaten for challenging the country’s regime for its human rights violations, particularly those committed against ethnic minorities. It was also in the solitude of his prison cell that he experienced a deep conversion to Christ that would eventually culminate in a vocation to the priesthood.

Years later, reflecting on his imprisonment, Fr. Mawdsley would say: “Primarily, it was to show solidarity with the Burmese people, and particularly with the prisoners. It’s very clear when you’re willing to be alongside people in prison for their political rights, they realize they’re not forgotten by the world.”

In the new video, published on Jan. 28, Father Mawdsley says: “Truth is needed for spiritual health … It’s not enough to know it in our hearts. We need to hear it said by men in authority, from bishops and cardinals, that nobody has the right to attack tradition.”

Prelates such as Cardinal Blase Cupich of Chicago are “willing for the war and the slaughter to continue,” Fr. Mawdsley observes.

Addressing himself to those shepherds who wish to suppress the traditional liturgy, he says: “You may personally hate the Old Mass, but you can see that Christians love it. They love to encounter Christ there. They pray there more deeply than anywhere. Why would you take this away?”

Prelates such as Cardinal Blase Cupich of Chicago are “willing for the war and the slaughter to continue,” Fr. Mawdsley observes, in a reference to the cardinal's brutal new policy for implementing Traditionis Custodes in the archdiocese. “Of all the days of the year, he chose Christmas Day to drop the axe. Who does that? Is that not sick? … He’s like another Herod.”

The former FSSP priest, who left the fraternity with the intention of speaking out, also called Archbishop Roche’s claim that most of the episcopate support efforts to suppress the traditional liturgy “unbelievable” given the reactions of bishops to Traditionis Custodes and the Responsa. “But this is precisely, bishops, why we need to hear in public what the truth is. Otherwise, the propaganda from Archbishop Roche will stand. And it’s so depressing to think that the Shepherds can’t find it in them to defend Christ, to defend the flock, to defend the faithful and to defend tradition.”

The Remnant spoke with Fr. Mawdsley about his new video:

(Diane Montagna) Fr. Mawdsley, why did you make this video?

(Fr. Mawdsley) Because if we do not speak the obvious truth then truth will die in us. Pope Francis, Archbishop Roche, Cardinal Cupich, and many other bishops are acting illegally in attempting to suffocate tradition. They are betraying the mission which Jesus gave to the Church. It would be wonderful if they were so surprised by the strength of resistance that they reconsidered and repented. But their reaction is not the priority. More important is that priests speak the truth without fear, otherwise we have nothing left. The flock is starving. And as all generations before us have passed on the Deposit of Faith, so for the sake of future generations we must not drop the ball. Or we must recover it. Without Tradition there is no future. And most importantly, for God’s glory. Those who had Tradition robbed from them in the 1950-70s did not know where it was leading. We have seen the horror, the indignity, the weakness, and inappropriateness of the Novus Ordo. In essence it is still Christ’s awesome Holy Sacrifice of Calvary; but what man has done to His Memorial is a faithless insult to God.

Let us defend the flock, let us break the jaws of the wicked and rescue the prey from their teeth.

(DM) You were ordained a priest of the Priestly Fraternity of St. Peter. What is your relationship to the FSSP now?

(Fr. M) The FSSP is, I think, one of the best bodies of priests in the world. They are a great treasure in the Church. But I informed the superiors that I would leave and did not seek permission. It followed that I have been suspended a divinis for illegitimate absence. Obviously, I do not hold this against the Fraternity. They are definitively not the problem. But I will keep a distance, for there are vicious men in the hierarchy who will want to meet out reprisals on the innocent, in order to paralyze resistance.

Traditionis Custodes is built on lies, its content is incoherent, and it is aimed at the destruction of the greatest good on earth.

(DM) Did this video have anything to do with your leaving the FSSP?

(Fr. M) The videos were made after I left the Fraternity, after I was suspended. I left the Fraternity with the intention of speaking out. The reason I did not seek permission was precisely to get a distance from the Fraternity, to be suspended, so that they can in truth say they are not responsible or accountable for the things I am saying. For the same reason, after some thought, I have not approached any other order or sought to be incardinated in a diocese. It would only bring trouble to them under the current oppression. There really are vicious men in the hierarchy who will unleash reprisals if they can find a target.

The Responsa are its vomit. It is better to be suspended than to pretend this wickedness has legal value.

(DM) What message would you like to send to your brother priests in light of Pope Francis’ Traditionis Custodes and the Responsa ad dubia issued by CDW Prefect Archbishop Roche just days before Christmas?

(Fr. M) God is mighty. We only need to follow Him, no matter what cost. He does not want us to support the destruction of Judas and Caiaphas, I mean with those like Archbishop Roche and Pope Francis who are savaging the Church and casting the faithful out. We can recognize their authority without complying with abuses of it. It really does not matter what price we pay on earth, only let us live in truth, let us defend the flock, let us break the jaws of the wicked and rescue the prey from their teeth. Traditionis Custodes is built on lies, its content is incoherent, and it is aimed at the destruction of the greatest good on earth. The Responsa are its vomit. It is better to be suspended than to pretend this wickedness has legal value.

Please consider sharing this vital video message with your priest, bishop, friends, family, and social media contacts. This is no longer a question of Traditionalism vs. Modernism or Neo-Catholicism. This has become a matter of life vs. death, freedom vs. tyranny, patriotism vs. globalism, and Christianity vs. atheism.

Every priest in the world, diocesan, FSSP, SSPX, ICK, etc: Please find a way to undermine the anti-Tradition agenda of this pontificate as Father Mawdsley has done so courageously.

You bishops who have kept the Faith: For God’s sake and the sake our nation and our children, please find a way to circumvent the evil orders coming down from the Vatican. We beg you, Your Excellencies, resist this globalist pope of the New World Order.

To the "clans" the world over: Share this urgent video message, which is also available at The Remnant's YouTube and Rumble channels, as well as Fr. Mawdsley's YouTube channel. Holy Mother Church needs all of her sons and daughters to stand with her as she undergoes this horrific persecution at the hands of human hirelings who have abandoned the Cross in pursuit of human respect.

[Comment Guidelines - Click to view]
The Remnant values the comments and input of our visitors. It’s no secret, however, that trolls exist, and trolls can do a lot of damage to a brand. Therefore, our comments are heavily monitored 24/7 by Remnant moderators around the country.  They have been instructed to remove demeaning, hostile, needlessly combative, racist, Christophobic comments, and streams not related to the storyline. Multiple comments from one person under a story are also discouraged. Capitalized sentences or comments will be removed (Internet shouting).
The Remnant comments sections are not designed for frequent personal blogging, on-going debates or theological or other disputes between commenters. Please understand that we pay our writers to defend The Remnant’s editorial positions. We thus acknowledge no moral obligation whatsoever to allow anyone and everyone to try to undermine our editorial policy and create a general nuisance on our website.  Therefore, Remnant moderators reserve the right to edit or remove comments, and comments do not necessarily represent the views of The Remnant.
back to top
Last modified on Thursday, February 3, 2022
Tweet
More in this category: « THE RUSSIA HOAX: “Never Go to War over an East European Cause” THE VATICAN-BEIJING PACT: Whistleblower Exposes High-Stakes Organ Harvesting in China »