COVID PREDATORS: Our Next Black Legend 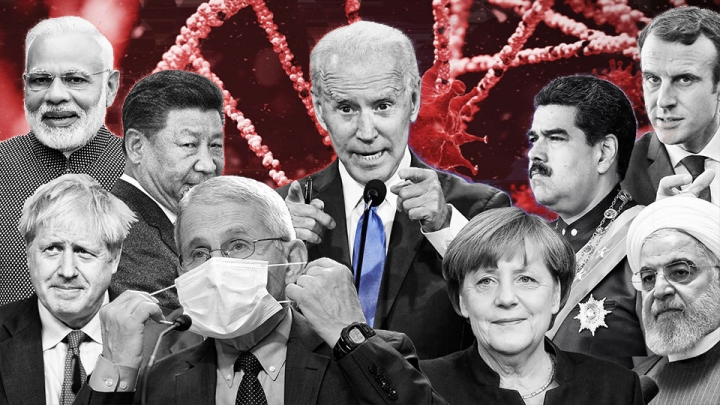 The black legends of Catholicism—crusades, inquisitions, Galileo, etc.—are useful to the Church's opponents. They can take an undeniable historical event, remove it from its historical context, and ascribe its bad characteristics to the Church. If the Church goes away, they suggest, the bad will go with it.

The inference is circular, since it assumes what it purports to prove:  the Church is bad. Rhetorically, however, the move often works. Catholics are reduced to discussing historical context, which no one cares about, or maintaining that non-Catholic societies are even worse, which is insufficiently utopian and therefore no fun.

Our next black legend, the Church's cooperation with the covid coup of free societies, may be the worst yet.

Unfortunately, our next black legend, the Church's cooperation with the covid coup of free societies, may be the worst yet.

Our last black legend, the clerical sex abuse crisis, would seem to have been the worst. Scroll down the comments to any news story on the pope or bishops, and a few turns will reveal references to "liking boys" or "abusing kids." The crisis is a preoccupation which frustrates rational evaluation of the Faith, simultaneously leading Catholics out the door and preventing others from coming in.

Those who evaluate the Church based on the clerical sex abuse crisis apparently think that by avoiding clerics they can avoid such abuse, or at least avoid the clerical culture which led to it. Their plan will not work, however, because although the predators were clerical, their cooperators largely were not. Sure, the bishops knew, and other priests knew. But wherever this happened, religious sisters often knew. Lay employees of the Church often knew. And even parishioners often knew.

Just look around. For decades now, sinful adults have gained rights while innocent children have lost them.

These assertions may outrage some, but the predatory acts by clerics were too flagrant to sustain a thesis of widespread ignorance. If someone were to respond that non-clerics in the Church would have taken aggressive action had they known, he or she is presuming too much. Most people will not take aggressive action in a situation like this, because doing so can get one hurt.

A mere whisper campaign would have been enough to hurt anyone who responded with vigor to the sex abuse crisis, especially in decades when the Church was more cohesive. A Catholic father would have worried about feeding his family if he were fired or his customers were driven off by clerical rumors. More direct retaliation was also possible. A Catholic mother would have worried that her other children could be targeted if an effective response were made to the harm inflicted on one.

The behavior of those who knew about clerical sex abuse and did little or nothing is thus easily understood. There are always casualties in a fight, so most people chose not to fight. This was a crisis of fallen human nature, not of the clerical state or sacramental system; considered specifically, it was a worldly crisis, not a churchly one.

Just look around. For decades now, sinful adults have gained rights while innocent children have lost them. Adults wanted no-fault divorce, and it became law. Adults wanted pornography, contraception, abortion, and sodomy, and these were called constitutional rights. "To hell with the kids" is the message of the world, and in this we followed the world.

The crisis then continued in part because many Catholics with knowledge of prior clerical sexual abuse remained silent. A bishop once remarked to this writer that he was not angry with the reporters and prosecutors who finally exposed the abuse. "Without them," he said, "nothing would have changed."

The abuse could also remain hidden for a time because kids are "resilient." This only means children can sometimes bury pain and soldier on until the challenges of life expose their injuries. Relational disfunction, anxiety, depression and chemical abuse may occur years later, when life requires more than doing homework and playing sports.

That ordinary people would believe a mask not rated for toxic dust could stop a virus is astonishing.

Most of the Catholic cooperators with the height of the clerical sexual abuse in the 1970s have died. Most of the predators themselves, who were usually younger than their cooperators, have died or been removed from office. And some of those who endured the crisis as children are now in authority.

These are the only reasons a man as powerful as Theodore McCarrick faces justice on earth. McCarrick's name is nevertheless associated with the Church's response in the United States to the clerical sex abuse crises, Virtus. This program, although presumably well intentioned, is called "sex-predator training" by lay persons of this writer's acquaintance. It is hard to deny that the program seems to train normal people to think like predators, i.e., that every encounter with a child is potentially sexual. One wonders how children process the knowledge that the adults around them receive such training.

In any event, Virtus undoubtedly failed to prepare Catholics for covid grooming. We were first told that we were very, very vulnerable. We were then isolated from family, friends, and work. We were next subjected to a physical touch, the mask, which was often unwanted. During the entire process, we were conditioned to accept the eventual penetration of our bodies for injection of genetic material. One injection is not enough, of course, so we must be penetrated again and again. And we are told that refusing any of these steps, especially the injections, will mean punishment.

After about two generations have passed, the same length of time since the height of the clerical sex abuse crisis, most of the covid predators will be dead.

The sexual overtones of the covid measures are so evident they are boring. A more notable feature is their disconnect from reality:  in response to a virus which even the World Health Organization admits has a survival rate of over 98%, we have significantly fractured society, worn flimsy masks, and taken experimental vaccines. That psychopathic predators would frame their political control measures in sexual terms is trite; that ordinary people would believe a mask not rated for toxic dust could stop a virus is astonishing.

But here we are, and once again. After about two generations have passed, the same length of time since the height of the clerical sex abuse crisis, most of the covid predators will be dead. Most of their Catholic cooperators, who in this case are usually younger than the predators themselves, will be dead or removed from office.

Still living and active, however, will be those children who survive the covid abuse. Freed from the blinding psychosis, they will perceive the insanity of the measures imposed upon them. They may even perceive the extent of their own injuries. And they will be furious.

In charity, we should also pray for the covid predators and their Catholic cooperators.

This will be hard to shake. The survivors of covid abuse will not rue unauthorized Church practice, as do survivors of clerical sex abuse, but official Church policy. Our leaders simply cannot stop pushing the covid measures.

It is time to start praying for the children who will survive. May they understand Christ did not do this to them, and that His healing presence is still found in the sacraments of the Church. To lose even the sacraments is the unbearable tragedy of those swayed by the black legends of Catholicism.

In charity, we should also pray for the covid predators and their Catholic cooperators. Since our Lord made this His prayer from the cross, we may pray as well:  "'Father, forgive them, for they do not know what they are doing.'" (Lk. 23:34.)

[Comment Guidelines - Click to view]
The Remnant values the comments and input of our visitors. It’s no secret, however, that trolls exist, and trolls can do a lot of damage to a brand. Therefore, our comments are heavily monitored 24/7 by Remnant moderators around the country.  They have been instructed to remove demeaning, hostile, needlessly combative, racist, Christophobic comments, and streams not related to the storyline. Multiple comments from one person under a story are also discouraged. Capitalized sentences or comments will be removed (Internet shouting).
The Remnant comments sections are not designed for frequent personal blogging, on-going debates or theological or other disputes between commenters. Please understand that we pay our writers to defend The Remnant’s editorial positions. We thus acknowledge no moral obligation whatsoever to allow anyone and everyone to try to undermine our editorial policy and create a general nuisance on our website.  Therefore, Remnant moderators reserve the right to edit or remove comments, and comments do not necessarily represent the views of The Remnant.
back to top
Last modified on Thursday, January 13, 2022
Tweet
More in this category: « What if the Pre-Vatican II Popes Were Actually Right? ON VACCINES & TYRANNY: FSSP Priest Defends the Catholic Position »