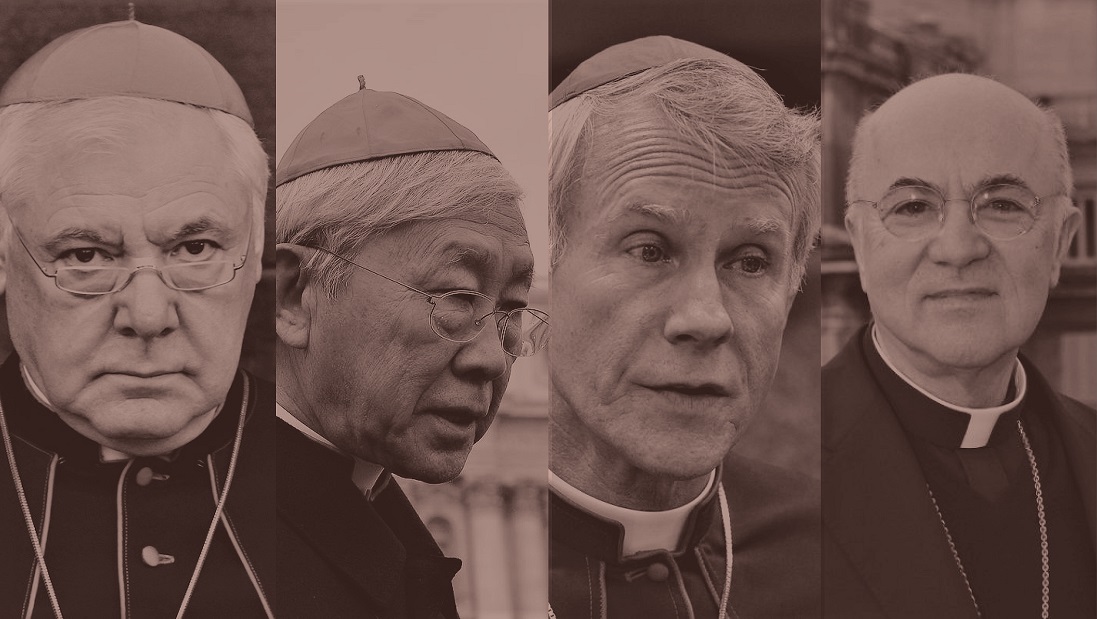 Titled “An Appeal for the Church and the world,” the three-page document (see full text below) was released in six languages on Thursday, May 7 at 7:30, local-time Rome.

Bishop Joseph Strickland of Tyler, Texas, and Bishop Athanasius Schneider of Astana, Kazakhstan, have also put their names to the appeal, together with an international group of bishops.

The list of more than 80 signatories includes prelates and theologians, doctors (several from northern Italy), lawyers, journalists and heads of associations. American signatories include Michael Matt, Editor of the Remnant, and Steven Mosher, a renowned expert on China and President of the Population Research Institute.

The prelates call on the scientific community to provide real cures for Covid-19 and remind them that developing or using vaccines derived from aborted fetuses is “morally unacceptable.” They exhort government leaders to ensure that citizens are not controlled through “contact-tracking” or other similar methods. And they urge the media to provide accurate information by giving room to “voices that are not aligned with a single way of thinking”.

As Pastors, they also reassert the authority of Catholic Bishops to decide autonomously on all that concerns the celebration of Mass and the Sacraments.” They also claim “absolute autonomy” in matters falling within their “immediate jurisdiction,” such as “liturgical norms and ways of administering Communion and the Sacraments.”

“The State has no right to interfere, for any reason whatsoever, in the sovereignty of the Church,” the prelates write, asking that restrictions on the celebration of public ceremonies be removed.

Here below is the official English text of the Appeal for the Church and the world and the official list of signatories.

Those who wish to sign the appeal are invited to visit www.veritasliberabitvos.info.

In this time of great crisis, we Pastors of the Catholic Church, by virtue of our mandate, consider it our sacred duty to make an Appeal to our Brothers in the Episcopate, to the Clergy, to Religious, to the holy People of God and to all men and women of good will. This Appeal has also been undersigned by intellectuals, doctors, lawyers, journalists and professionals who agree with its content, and may be undersigned by those who wish to make it their own.

The facts have shown that, under the pretext of the Covid-19 epidemic, the inalienable rights of citizens have in many cases been violated and their fundamental freedoms, including the exercise of freedom of worship, expression and movement, have been disproportionately and unjustifiably restricted. Public health must not, and cannot, become an alibi for infringing on the rights of millions of people around the world, let alone for depriving the civil authority of its duty to act wisely for the common good. This is particularly true as growing doubts emerge from several quarters about the actual contagiousness, danger and resistance of the virus. Many authoritative voices in the world of science and medicine confirm that the media’s alarmism about Covid-19 appears to be absolutely unjustified.

We have reason to believe, on the basis of official data on the incidence of the epidemic as related to the number of deaths, that there are powers interested in creating panic among the world’s population with the sole aim of permanently imposing unacceptable forms of restriction on freedoms, of controlling people and of tracking their movements. The imposition of these illiberal measures is a disturbing prelude to the realization of a world government beyond all control.

We also believe that in some situations the containment measures that were adopted, including the closure of shops and businesses, have precipitated a crisis that has brought down entire sectors of the economy. This encourages interference by foreign powers and has serious social and political repercussions. Those with governmental responsibility must stop these forms of social engineering, by taking measures to protect their citizens whom they represent, and in whose interests they have a serious obligation to act. Likewise, let them help the family, the cell of society, by not unreasonably penalizing the weak and elderly, forcing them into a painful separation from their loved ones. The criminalization of personal and social relationships must likewise be judged as an unacceptable part of the plan of those who advocate isolating individuals in order to better manipulate and control them.

We ask the scientific community to be vigilant, so that cures for Covid-19 are offered in honesty for the common good. Every effort must be made to ensure that shady business interests do not influence the choices made by government leaders and international bodies. It is unreasonable to penalize those remedies that have proved to be effective, and are often inexpensive, just because one wishes to give priority to treatments or vaccines that are not as good, but which guarantee pharmaceutical companies far greater profits, and exacerbate public health expenditures. Let us also remember, as Pastors, that for Catholics it is morally unacceptable to develop or use vaccines derived from material from aborted fetuses.

We also ask government leaders to ensure that forms of control over people, whether through tracking systems or any other form of location-finding, are rigorously avoided. The fight against Covid-19, however serious, must not be the pretext for supporting the hidden intentions of supranational bodies that have very strong commercial and political interests in this plan. In particular, citizens must be given the opportunity to refuse these restrictions on personal freedom, without any penalty whatsoever being imposed on those who do not wish to use vaccines, contact tracking or any other similar tool. Let us also consider the blatant contradiction of those who pursue policies of drastic population control and at the same time present themselves as the savior of humanity, without any political or social legitimacy. Finally, the political responsibility of those who represent the people can in no way be left to “experts” who can indeed claim a kind of immunity from prosecution, which is disturbing to say the least.

We strongly urge those in the media to commit themselves to providing accurate information and not penalizing dissent by resorting to forms of censorship, as is happening widely on social media, in the press and on television. Providing accurate information requires that room be given to voices that are not aligned with a single way of thinking. This allows citizens to consciously assess the facts, without being heavily influenced by partisan interventions. A democratic and honest debate is the best antidote to the risk of imposing subtle forms of dictatorship, presumably worse than those our society has seen rise and fall in the recent past.

Finally, as Pastors responsible for the flock of Christ, let us remember that the Church firmly asserts her autonomy to govern, worship, and teach. This autonomy and freedom are an innate right that Our Lord Jesus Christ has given her for the pursuit of her proper ends. For this reason, as Pastors we firmly assert the right to decide autonomously on the celebration of Mass and the Sacraments, just as we claim absolute autonomy in matters falling within our immediate jurisdiction, such as liturgical norms and ways of administering Communion and the Sacraments. The State has no right to interfere, for any reason whatsoever, in the sovereignty of the Church. Ecclesiastical authorities have never refused to collaborate with the State, but such collaboration does not authorize civil authorities to impose any sort of ban or restriction on public worship or the exercise of priestly ministry. The rights of God and of the faithful are the supreme law of the Church, which she neither intends to, nor can, abdicate. We ask that restrictions on the celebration of public ceremonies be removed.

We should like to invite all people of good will not to shirk their duty to cooperate for the common good, each according to his or her own state and possibilities and in a spirit of fraternal charity. The Church desires such cooperation, but this cannot disregard either a respect for natural law or a guarantee of individual freedoms. The civil duties to which citizens are bound imply the State’s recognition of their rights.

We are all called to assess the current situation in a way consistent with the teaching of the Gospel. This means taking a stand: either with Christ or against Christ. Let us not be intimidated or frightened by those who would have us believe that we are a minority: Good is much more widespread and powerful than the world would have us believe. We are fighting against an invisible enemy that seeks to divide citizens, to separate children from their parents, grandchildren from their grandparents, the faithful from their pastors, students from teachers, and customers from vendors. Let us not allow centuries of Christian civilization to be erased under the pretext of a virus, and an odious technological tyranny to be established, in which nameless and faceless people can decide the fate of the world by confining us to a virtual reality. If this is the plan to which the powers of this earth intend to make us yield, know that Jesus Christ, King and Lord of History, has promised that “the gates of Hell shall not prevail” (Mt 16:18).

Let us entrust government leaders and all those who rule over the fate of nations to Almighty God, that He may enlighten and guide them in this time of great crisis. May they remember that, just as the Lord will judge us Pastors for the flock which he has entrusted to us, so will He also judge government leaders for the peoples whom they have the duty to defend and govern.

With faith, let us beseech the Lord to protect the Church and the world. May the Blessed Virgin, Help of Christians, crush the head of the ancient Serpent and defeat the plans of the children of darkness.

[Comment Guidelines - Click to view]
The Remnant values the comments and input of our visitors. It’s no secret, however, that trolls exist, and trolls can do a lot of damage to a brand. Therefore, our comments are heavily monitored 24/7 by Remnant moderators around the country.  They have been instructed to remove demeaning, hostile, needlessly combative, racist, Christophobic comments, and streams not related to the storyline. Multiple comments from one person under a story are also discouraged. Capitalized sentences or comments will be removed (Internet shouting).
The Remnant comments sections are not designed for frequent personal blogging, on-going debates or theological or other disputes between commenters. Please understand that we pay our writers to defend The Remnant’s editorial positions. We thus acknowledge no moral obligation whatsoever to allow anyone and everyone to try to undermine our editorial policy and create a general nuisance on our website.  Therefore, Remnant moderators reserve the right to edit or remove comments, and comments do not necessarily represent the views of The Remnant.
back to top
Last modified on Sunday, May 10, 2020
Tweet

More in this category: « LOCKDOWN MELTDOWN: America Fights Back The Modern Church WANTS to be Nonessential »