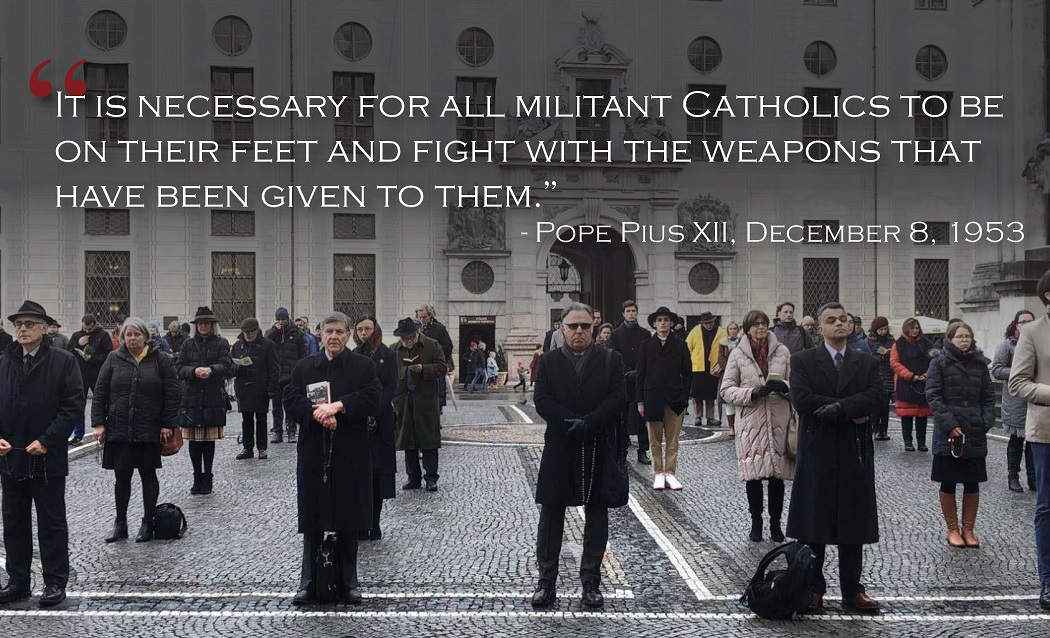 Michael Matt/RTV joins the Catholic "clans" in Munich, Germany, where Archbishop Carlo Maria Viganò made a surprise appearance to stand with traditional Catholic resistance to the German Bishops' attempt to implement the errors of the Amazon Synod throughout the whole Church.

This Acies Ordinata event was not about numbers, by the way. It was done by personal invite to journalists and representatives of Catholic action groups around the world. The event was held within a stone's throw of Cardinal Marx's residence and was in direct resistance to his agenda. If this event had been advertised beforehand, there is a very good chance it would have been blocked.

The press were there. Archbishop Viganò was there. The statement was loud and clear and we thank God for the success of this event and for the strategic brilliance of its anonymous organizers, who clearly are not looking for "likes", large numbers or personal recognition. Where this group is concerned, this is war -- and they just fired the first shot.

[Comment Guidelines - Click to view]
The Remnant values the comments and input of our visitors. It’s no secret, however, that trolls exist, and trolls can do a lot of damage to a brand. Therefore, our comments are heavily monitored 24/7 by Remnant moderators around the country.  They have been instructed to remove demeaning, hostile, needlessly combative, racist, Christophobic comments, and streams not related to the storyline. Multiple comments from one person under a story are also discouraged. Capitalized sentences or comments will be removed (Internet shouting).
The Remnant comments sections are not designed for frequent personal blogging, on-going debates or theological or other disputes between commenters. Please understand that we pay our writers to defend The Remnant’s editorial positions. We thus acknowledge no moral obligation whatsoever to allow anyone and everyone to try to undermine our editorial policy and create a general nuisance on our website.  Therefore, Remnant moderators reserve the right to edit or remove comments, and comments do not necessarily represent the views of The Remnant.
back to top
Last modified on Sunday, January 19, 2020
Tweet

More in this category: « AMAZON SYNOD FALLOUT: International Catholic Protest in Munich Stopping the Heartbeat of the Church »