Seraphia: The Real Veronica (Based on the Visions of Anne Catherine Emmerich) 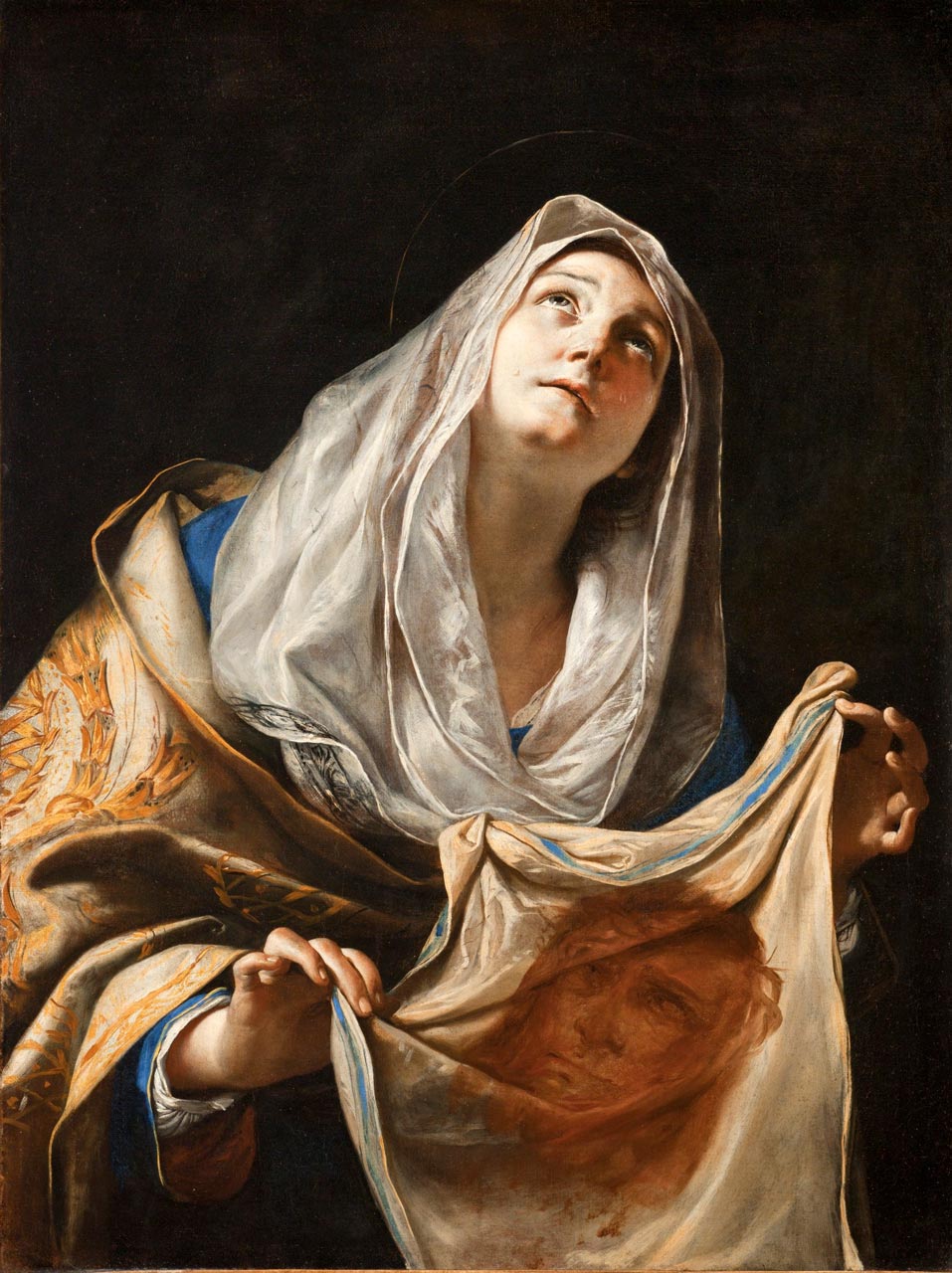 Introductory Note to the Editor: The real life of the woman called St. Veronica is virtually unknown. Some writers just guess about who she really was. But in the four volumes of Anne Catherine Emmerick’s Life of Jesus Christ, she is mentioned many times. Sometimes Anne Catherine calls her Seraphia, her real name, and sometimes Veronica, the woman of the veil. I have gathered from these four books tidbits of information about her life and wrote this little narrative about her. I felt her story of true dedication to Jesus all His life should be known. It was my hope that you would publish this article in The Remnant so others will know who this saintly person really was. She was, according to Anne Catherine Emmerich, the keeper of the Holy Grail until Christ requested it for the Last Supper. That is another story in itself. J. Meyer

HER NAME WAS SERAPHIA, TAKEN FROM THE SERAPHIM, the angels on fire with love. It suited her well. She was the niece of the old Temple prophet, Simeon. She was cousin of John the Baptist through his father Zachary. Yet she is known to the world only as Veronica, the woman of the veil.

She was tall and stately, a woman of about fifty, still showing the beauty she was once known for in her youth. She stood, waiting on the steps leading to her house, listening to the cursing, jeering, and yelling of the crowd as the slow pitiful procession approached.

Frightened, yet deep in sorrow, Seraphia waited, her veil wrapped about her head, holding the hand of her little adopted daughter. Then she saw Him coming, the One she knew was the Messiah, bloodied from the terrible scourging, a crown of sharp thorns upon His head, barely able to walk while carrying the cross of His crucifixion. How had it come to this? Only a few days ago people stood cheering Him on the roadway leading into Jerusalem, as Jesus entered the city on a donkey. They laid their coats and palm branches before Him crying, “Hosanna, Hosanna.”

She had been there. She had removed the long veil from her head and spread it out before Him as He rode by, giving her a loving, and knowing glance.

Now everything was turned upside down. The slow procession was just before her. Taking all the courage she could gather, Seraphia forced her way through the jeering crowd and ran in front of Jesus, causing the long line of boisterous soldiers carrying chains and whips, executioners, and Pharisees on horseback to halt. She knelt on one knee, quickly removed her veil, and handed it to Jesus.

“Master, wipe your face so that you may better see your way.”

Jesus gratefully took the scarf and wiped the blood, sweat, and spit from His face and eyes.

Stunned, then enraged, Caiaphas and the other Pharisees, already impatient with the slow pace, screamed, “Get that woman out of here! How dare she interfere and give homage to a criminal!”

One of the soldiers roughly pulled her away. Clutching her veil to her, she pushed through the crowd and rushed up the steps to her house. She flung the veil onto a table and collapsed onto the floor. A few minutes later a friend burst into the room, saw her and roused her, exclaiming “Seraphia, that was such a brave thing you did.”

Looking at the veil lying on the table her friend cried, “Look at your veil”. Looking at the veil, Seraphia saw the bloody imprint of the face of Jesus. She was filled with both grief and consolation. On her knees before the image she declared, “Now will I leave all, for the Lord has given me a memento.”

She held the veil to her heart and followed Mary, the mother of Jesus, Mary Klopas, her niece, Johanna, and the other holy women to the place of the crucifixion. After Joseph of Arimathea and the others had taken Jesus down from the cross, they all formed a small procession to the tomb where Jesus was laid.

In a few days, word of Seraphia’s miraculous veil spread all over the little community of the faithful. Everyone flocked to her to see and marvel at the wonderful cloth. Soon they were calling her Veronica, from veri icon, the “true image.” This remained her name ever after.

The news of the image of the veil spread even to the Emperor Tiberius. He was very angry when he heard of the crucifixion of Jesus, the wonder-worker, the healer of many. He had thought that Jesus could have cured him of the terrible disease he had suffered from for so long. Greatly angered at Pilate for having Jesus executed, Tiberius sent him off to the wilds of Gaul in disgrace. Then Tiberius heard of the woman Veronica and her wondrous veil. He immediately sent his consul to Jerusalem to bring her and the veil to Rome. Obediently, she went, accompanied by Nicodemus and a young servant from the Temple.

Tiberius was propped up with pillows on his couch when Veronica was ushered into his room. He was greatly impressed when Veronica, with regal bearing, walked in carrying her miraculous gift over her arm.

“So you are the woman of the veil, the one they call Veronica. Show me this veil with the wondrous image of the Man.” She opened up her veil all the way so he could see it. Tiberius stared but said nothing. Finally he said, “Tell me all about this Jesus and how you got this wondrous image.”

“Jesus is our Messiah. It had been predicted for centuries that he would come to save us. My uncle Simeon, whom I lived with since early youth, was a holy prophet. He spent many hours in the Temple praying that the Messiah would come and that he would live to see the Messiah and hold him in his arms. When he saw the bright star shining in the east he knew that was the sign that the Messiah was born and that He would soon be brought to the Temple. I saw Simeon with much great joy as he held the Holy Babe in his arms. Since that day I have dedicated myself to Him.

“I watched Him as He grew whenever Mary and Joseph brought Him to the Temple.   When He was twelve and alone in Jerusalem, I sent baskets of food to Him. When He grew to manhood and started His teachings I again sent baskets of food to Him. Later I followed Him and with His mother, Mary, and others helped to see that He and the disciples had food and other comforts. My husband, Sirach, often forbade me to do this, thinking Jesus was just a troublemaker. Still I would try to be with Jesus and the other women to listen to His teachings. Sirach several times actually had me imprisoned for long stretches to keep me from following Jesus. But later our friends Nicodemus and Joseph of Arimathea convinced Sirach that He was wrong, that they too believed in Jesus.”

Veronica went on to tell how Jesus had healed many people of blindness, deafness, leprosy. She told how He had fed thousands with just a few fishes and loaves of bread. She then told how the Pharisees came to hate Jesus and wanted Him killed, how they had threatened Pilate with riots and reports to Tiberius if he did not have Jesus crucified. Pilate had Jesus scourged; the soldiers crowned Him with thorns. Jesus then had to carry a heavy cross to the place of execution. It was then, she told Tiberius, that she ran out to let Jesus wipe His face with her veil so that He could see better. Later it was discovered that He had left His image upon the veil.

She spoke with such eloquence and love that Tiberius felt the warm glow of her words burning inside him. Then he realized he had been cured. Tiberius was so grateful to Veronica that he wanted her to stay in Rome. He would give her a large house, with servants, and she would never want for anything. Veronica refused, saying she had to go back to Jerusalem. 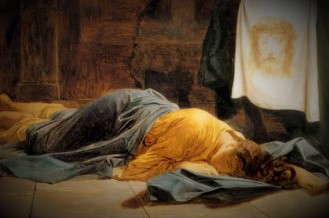 “I want to die where my Lord Jesus died.” Feeling she didn’t have much more time, she went back to Jerusalem. Fearing for the veil, she sent it on to Mary, the mother of Jesus for safe keeping.

Back in Jerusalem, she found the Pharisees were putting many of Christ’s followers into prison. When they heard that Veronica, a follower of Jesus, the woman with the veil, had found great favor with Tiberius, the Emperor, they were enraged. Veronica and some of the other women tried to leave Jerusalem and go to a safer place, but the Temple guards were sent after them. Veronica could not escape. The guards caught her and took her back to Jerusalem to the Pharisees. She was put into prison to die. She was given no food. She who had been so generous with food for others was now to be deprived of this life sustenance. Her last days were undoubtedly spent in much pain and prayer. She must have prayed much until her strength gave out.

Jesus would never forget this woman who had showed such kindness and devotion to Him all His life. When she closed her eyes in death, Jesus was surely there to take her by the hand and say to her, “Come, dear Seraphia. Well have you lived up to your name, fire of love, burning one. Come, I have prepared a place for you.”

Published in Remnant Articles
[Comment Guidelines - Click to view]
The Remnant values the comments and input of our visitors. It’s no secret, however, that trolls exist, and trolls can do a lot of damage to a brand. Therefore, our comments are heavily monitored 24/7 by Remnant moderators around the country.  They have been instructed to remove demeaning, hostile, needlessly combative, racist, Christophobic comments, and streams not related to the storyline. Multiple comments from one person under a story are also discouraged. Capitalized sentences or comments will be removed (Internet shouting).
The Remnant comments sections are not designed for frequent personal blogging, on-going debates or theological or other disputes between commenters. Please understand that we pay our writers to defend The Remnant’s editorial positions. We thus acknowledge no moral obligation whatsoever to allow anyone and everyone to try to undermine our editorial policy and create a general nuisance on our website.  Therefore, Remnant moderators reserve the right to edit or remove comments, and comments do not necessarily represent the views of The Remnant.
back to top
Last modified on Sunday, April 8, 2018
Tweet
More in this category: « Remnants of the Past: At the Catacomb’s Gate FROM THE SYNOD ON YOUNG PEOPLE, Libera Nos Domine »