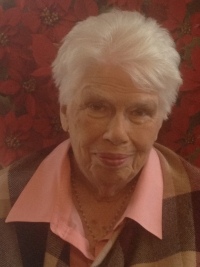 I am so very grateful to the many thousands of brothers and sisters in Christ around the world who were praying for my dear mother this week after she’d been stricken quite suddenly with a stroke last Tuesday.

I am happy to report that our prayers have been answered, for although she went to her eternal reward yesterday, January 17, 2016, it was only after several days of “recovery,” wherein it had appeared she would regain her physical health but never her cognitive function.  It is my belief that the many prayers on her behalf led to a Divine assistance in removing this cross from her, despite the best efforts of medical experts to keep her body alive.

So now she’s gone on ahead, having died as she lived—in the Faith, in the loving embrace of her family and with the assistance of the Sacraments of the Church she loved so much. Before her passing, she was even blessed with the apostolic pardon.  Indeed, hers was a happy death. (Thank you, St. Joseph)


But she took nothing for granted. Before she went into the surgery, for example, she told the surgeons that if they insisted on removing her scapular in order to prep for the procedure, she would simply cancel the surgery and go home. The old Faith really did mean more to her than life itself.

On the other hand, my mother would be the last person on earth to approve of anyone canonizing her on her death bed. Please pray for the repose of the soul of Marilyn Matt—a faithful Catholic who lived the Catholic thing to its fullest and who trusted in Divine Providence completely. When my father left The Wanderer back in 1967, for example, and was left with no job and 7 little children to raise, she was the one who said: “Well, let’s start another newspaper. If it’s God will, it will succeed.”  And 50 years later, The Remnant is still going strong.

When she found out that the great Pilgrimage to Chartres France had never had an American contingent, it was she who said: “Well, let’s start one.  If it’s God will, it will survive.” That was 25 years ago, and the chapter she started is still alive and well.

And when my father, a veteran of WWII who was still unmarried at 38, having decided that duty to family and The Wanderer made it impossible for him to have his own family, it was my mother (14 years his junior) who said: “Well, let me help you do both. If it’s God’s will, it will work.”

That union in holy Matrimony back in 1954, by the way, led to my mother’s proudest achievement—9 children, 39 grand-children and over 60 great grand-children—all 110 are still practicing traditional Catholics.  Such was the example of joyfully living the Faith she’d given in this life.

She never intentionally missed Mass one Sunday or Holy Day of her entire life, she prayed the Rosary every day, and trusted in God and our Blessed Mother for everything in this life, with a strong devotion to the Infant of Prague. And she enjoyed life to the fullest, finding happiness in family, the beauties of nature, laughter, friends and a great sense of humor.

She was the sort of old-world woman that the old Catholic Church produced with some regularity, I suspect, generation after generation, but that today is not easy to find.

Even right up to the end, at 86 years old, she was working here at The Remnant, lived on her own, still driving herself to Mass or to run her little errands every day. That’s just the way she was, and we’ll never forget her indomitable spirit, never stop loving her, never cease being grateful to her for showing us how to live and now how to die as a Catholic.

In your charity, please pray for the repose of my mother’s soul.

Her Tridentine Requiem Mass will take place at 10:30 at St. Augustine Catholic Church in South St. Paul on Thursday January 21, and her wake will take place on Wednesday, January 20 from 4 to 8 pm at Willwerscheid Funeral Home (1167 Grand Ave, St. Paul MN).

Eternal Rest Grant Unto Her, O Lord, and Let Perpetual Light Shine Upon Her. May She Rest in Peace.

[Comment Guidelines - Click to view]
The Remnant values the comments and input of our visitors. It’s no secret, however, that trolls exist, and trolls can do a lot of damage to a brand. Therefore, our comments are heavily monitored 24/7 by Remnant moderators around the country.  They have been instructed to remove demeaning, hostile, needlessly combative, racist, Christophobic comments, and streams not related to the storyline. Multiple comments from one person under a story are also discouraged. Capitalized sentences or comments will be removed (Internet shouting).
The Remnant comments sections are not designed for frequent personal blogging, on-going debates or theological or other disputes between commenters. Please understand that we pay our writers to defend The Remnant’s editorial positions. We thus acknowledge no moral obligation whatsoever to allow anyone and everyone to try to undermine our editorial policy and create a general nuisance on our website.  Therefore, Remnant moderators reserve the right to edit or remove comments, and comments do not necessarily represent the views of The Remnant.
back to top
Last modified on Monday, January 18, 2016
Tweet

More in this category: « Flip Turns and the Latin Mass The Blackwhite of Pope Francis »