NOTHING PERSONAL, JUST BUSINESS: Time for Ganswein to Go 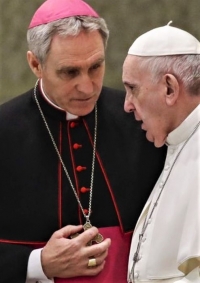 Following the embarrassing scandal over Robert Cardinal Sarah’s book on priestly celibacy, co-written by Benedict XVI, wherein Archbishop Georg Gänswein denied that Benedict was, in fact, the co-author, the Associated Press is now reporting that Gänswein has been conspicuous by his absence from Pope Francis' protocol team ever since.

In a press release yesterday, the Vatican press office denied that Gänswein, who also serves as secretary for Benedict XVI, has been officially suspended as head of Francis’ papal household by Pope Francis.

So the question is: Where is he?

The Vatican claimed that Gänswein’s absence from Francis’ private and public audiences for the past several weeks was “due to an ordinary redistribution of the various commitments and duties of the prefect of the Papal Household." 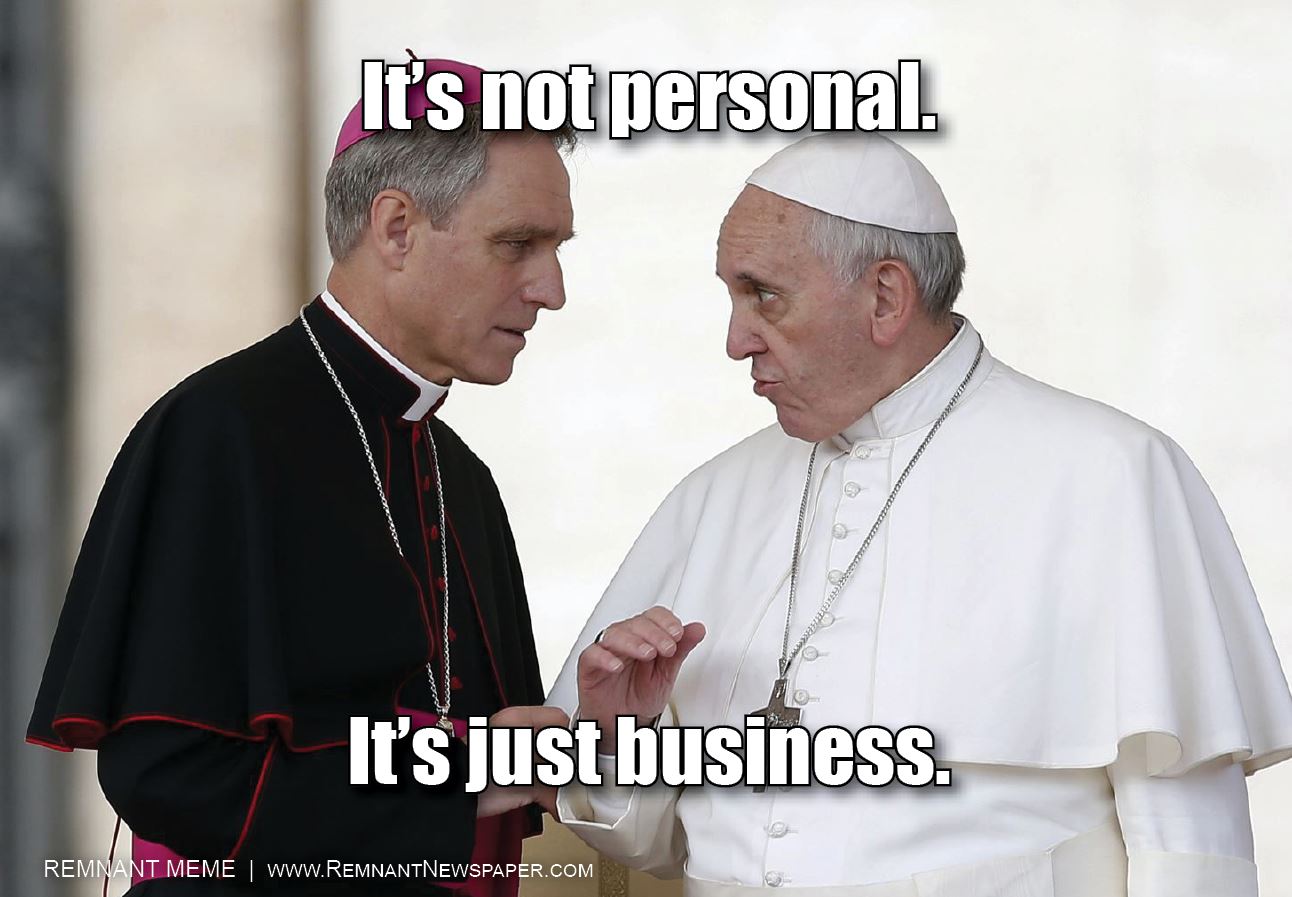 According to the AP, the Vatican’s statement “suggested the Holy See was trying to find an elegant way to justify Gänswein's unofficial removal from Francis’ team by saying he was dedicating himself more full-time to Benedict's needs.”

REMNANT COMMENT: Just another day in the pontifical house of the rising sun.

What’s really going on here? Who knows? Maybe Benedict’s jailor was spending too much doggone time away from the prisoner, whose role seems to be that of witness for the defense of the most ridiculous pontificate in the history of the papacy.

Anyway, the real bad news for Gorgeous George is that he may have to sit out the next circus or two, just to make sure Cardinal Sarah isn’t sneaking into Benedict’s room to dash off another book in defense of Catholic doctrine.

Speaking of circuses, all this pontificate is missing is the bearded lady.

[Comment Guidelines - Click to view]
The Remnant values the comments and input of our visitors. It’s no secret, however, that trolls exist, and trolls can do a lot of damage to a brand. Therefore, our comments are heavily monitored 24/7 by Remnant moderators around the country.  They have been instructed to remove demeaning, hostile, needlessly combative, racist, Christophobic comments, and streams not related to the storyline. Multiple comments from one person under a story are also discouraged. Capitalized sentences or comments will be removed (Internet shouting).
The Remnant comments sections are not designed for frequent personal blogging, on-going debates or theological or other disputes between commenters. Please understand that we pay our writers to defend The Remnant’s editorial positions. We thus acknowledge no moral obligation whatsoever to allow anyone and everyone to try to undermine our editorial policy and create a general nuisance on our website.  Therefore, Remnant moderators reserve the right to edit or remove comments, and comments do not necessarily represent the views of The Remnant.
Last modified on Wednesday, February 5, 2020