Who Are the Real Haters? 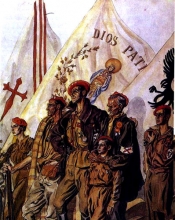 To the extent that they learn anything at all about history these days, Spanish or otherwise, American school children for several generations have been told bald-faced lies about the Spanish Catholic freedom fighters depicted in the following video.  Modern history is written by those who slaughtered the heroes, and, as we rummage through the ruins of Christendom, if we’re not prepared to question EVERYTHING with which the revisionists brainwashed us as children, we will be at a significant disadvantage and will ultimately become the useful idiots of the Godless revolution.

Look at this video, and tell me what you see: Haters?  Or Catholic heroes fighting for their Faith, freedom and traditional way of life? This is the song of the Spanish Royal Catholics who fought the Communist Republican Revolution and won.  Listen to the refrain, "Viva Cristo Rey" -- over and over again.

Like the Vendeans of France and the Cristeros of Mexico, their battle cry was always: "Viva Cristo Rey!"  It is essentially for this reason, in fact, that our modern, democratized society calls them 'haters' – even though we are the ones so consumed with self-gratification and so filled with hate that we think nothing of aborting millions of babies, euthanizing our elderly and infirmed, crushing the Christian conscience, institutionalizing Christophobia and brainwashing children to hate their own parents, past and traditions.

Question is: Who are the real haters?

By the way, Wikipedia gets it pretty close:

Carlism (Basque : Karlismo; Catalan : Carlisme; Galician : Carlismo; Spanish : Carlismo) is a traditionalist and legitimist political movement in Spain seeking the establishment of a separate line of the Bourbon dynasty on the Spanish throne. This line descended from DonCarlos, Count of Molina (1788–1855), and was founded due to dispute over the succession laws and widespread dissatisfaction with the Alfonsine line of the House of Bourbon. The movement was at its strongest in the 1830s but had a revival following Spain's defeat in the Spanish-American War in 1898, when Spain lost its last remaining significant overseas territories, Cuba, Puerto Rico and the Philippines.