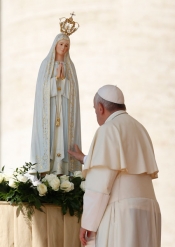 
And again, as interesting as that development is, it was simply the re-confirmation of a decade-old assertion made by Fr. Dollinger that had been previously published by Fr. Gruner and others.

But then the truly shocking thing happened: The Vatican Press Office issued a strongly worded denial of that which it had ignored for a decade—a denial purportedly from Pope Benedict himself, seemingly his first public reaction to anything since his resignation.

Now, if the intent of the Vatican Press Office was to put the whole Third Secret of Fatima controversy to rest, they failed miserably. For those who have been following claims made by the “Fatimists” of a cover-up, this truly bizarre Vatican denial only serves to pour gasoline on the fire.

But before I get to breaking down the Vatican denial, let’s ponder how bizarre it is that the Vatican would respond to the OnePeterFive story now, after it had been known, published, and repeatedly referenced by Fatimists for almost a decade. Granted, it is possible that the OnePeterFive development gave the story fresh legs, but Antonio Socci and Chris Ferrara have published and sold countless books on the intrigue surrounding the Fatima Secret—and yet the Vatican pretended to have hardly noticed, never refuting or addressing the mountain of evidence of the existence of missing text to the Fatima secret. For some reason, this suddenly gets an immediate and public response from the Vatican now? Why? Curiouser and curiouser, as another Alice once said. I have my theories on that, but first the Vatican response.

In order to properly understand the Vatican response from the point of view of an informed Fatimist, one must understand what most Fatimists have been contending all along. The mainstream Catholic media often dismisses the Fatimists by insisting that, in order to believe them, you must be willing to call multiple popes liars. This simply is not true. What most Fatimists allege is that the Vatican is playing some sort of mental reservation game.

In short, the Fatimists have long claimed that there exists an additional text written by Sr. Lucia around the same time as the vision with which we are all familiar. This additional text contains the words of Our Lady explaining the vision and likely containing a warning about massive threats to the faith that would come from within the Church. Prior to the year 2000, the context and likely contents of the actual Third Secret were attested to by so many people in the know that it is impossible to simply discount it. The Fatimists allege that, for some reason, whether due to the alarming content or its indictment of the changes in the Church during and following the Second Vatican Council, that popes since John XXIII have questioned the validity of certain aspects of this Secret’s text. They found it so alarming, so dangerous, or so uncomfortable, that they questioned whether it had not been tainted somehow, perhaps even by Sr. Lucia herself. Thus, having refused to accept the authenticity and veracity of this text, they have mentally excluded it as a legitimate part of the Third Secret.

This distinction is important to understand, as it makes sense of many otherwise incongruous and strangely precise statements made by prelates since 2000 regarding the Secret and ominous developments in the Church. Even though they might know that an additional text written by Sr. Lucia exists, they use this mental reservation to exclude it from the “legitimate” Third Secret. In their minds, they are not lying, but at the same time, they want to make sure to never confirm that there is more to the Third Secret, because such confirmation would cause a clamor for its release that would be difficult to impossible to resist.

With that understanding, we can easily see why this strange denial of the Fr. Dollinger assertion will simply add fuel to the fire.

Several articles have appeared recently, including declarations attributed to Professor Ingo Dollinger according to which Cardinal Ratzinger, after the publication of the Third Secret of Fatima (which took place in June 2000), had confided to him that the publication was not complete.

In this regard, Pope emeritus Benedict XVI declares “never to have spoken with Professor Dollinger about Fatima”, clearly affirming that the remarks attributed to Professor Dollinger on the matter “are pure inventions, absolutely untrue”, and he confirms decisively that “the publication of the Third Secret of Fatima is complete”.

On its face, this denial is meant to convince the reader of one thing: It is all a lie; Pope Benedict never even spoke to Fr. Dollinger about Fatima.

Except that is not what the statement actually says. The first paragraph lays out a very precise scenario; specifically, that of Pope Benedict’s post-2000 comment that the publication was not complete. But the next paragraph begins with a critical precision: “In this regard.” That precision means that the statement is not specifically denying that Pope Benedict had spoken to Fr. Dollinger about Fatima, simply that he did not tell Fr. Dollinger that the “publication was not complete.”

As for the words attributed to Pope Benedict in the Vatican Press Office denial — that Fr. Dollinger’s remarks “are pure inventions, absolutely untrue,” — we must admit that this may be true, even if the vehemence of the rebuke is not at all like Ratzinger and seems oddly terse for the rebuttal of an old friend.

What is more, it is hard not to notice that we are only provided these terse pull-quotes from Benedict with absolutely no context or understanding of the actual questions posed to Pope Benedict. This is reminiscent of the pull-quotes attributed to Sr. Lucia by Cardinal Bertone in support of the 2000 secret release, those 3 lines pulled from a 4-hour interview with an old woman. Honestly, without the proper context, these pull-quotes are of very little value in determining the truth of the matter, finding their only value in the perception of the general public.

Given the seriousness of the matter—something so serious, in fact, that the Vatican not only responded, but pulled Pope Benedict out for comment for the first time in 3+ years—this is a very unserious response. If the Vatican is truly concerned with putting this matter to rest, allow Chris Ferrara and Antonio Socci extended interview time with Pope Benedict and Cardinal Bertone to frame the questions properly and to record for all the complete and unabridged answers.

Perhaps the Fr. Dollinger story is not true in all its detail and the Vatican felt comfortable coming out with this denial in order to bolster the claim and public perception that the entirety of the Third Secret is released. Still, I have followed this Fatima story very closely, and, after reading this latest Vatican denial, I cannot help but be more convinced than ever that there is more to the story. ■

Did you miss this one in our print edition last month? What else did you miss?

[Comment Guidelines - Click to view]
The Remnant values the comments and input of our visitors. It’s no secret, however, that trolls exist, and trolls can do a lot of damage to a brand. Therefore, our comments are heavily monitored 24/7 by Remnant moderators around the country.  They have been instructed to remove demeaning, hostile, needlessly combative, racist, Christophobic comments, and streams not related to the storyline. Multiple comments from one person under a story are also discouraged. Capitalized sentences or comments will be removed (Internet shouting).
The Remnant comments sections are not designed for frequent personal blogging, on-going debates or theological or other disputes between commenters. Please understand that we pay our writers to defend The Remnant’s editorial positions. We thus acknowledge no moral obligation whatsoever to allow anyone and everyone to try to undermine our editorial policy and create a general nuisance on our website.  Therefore, Remnant moderators reserve the right to edit or remove comments, and comments do not necessarily represent the views of The Remnant.