Pope Francis Adds a Year to the Sesame Street Synod 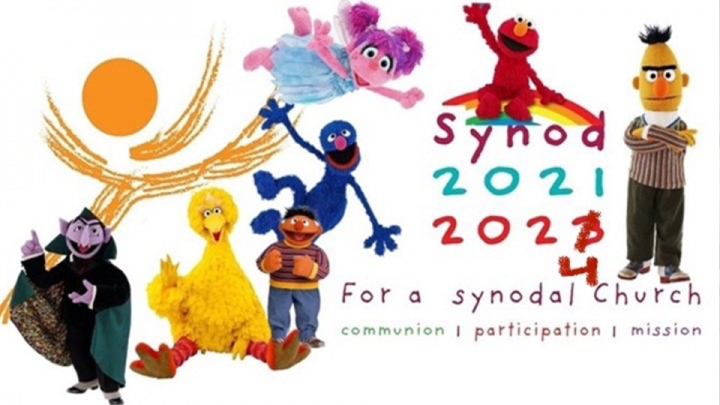 In a previous article, I covered why traditionalists like Oscar the Trad Grouch are not being included in the Sesame Street Synod, also known as the Synod on Synodality. This is because the true objective of the Synod is not to see what the Holy Ghost wants for the Church, or even to see what the Catholic laity want, but to find an excuse to try wrecking the Church. Otherwise, they wouldn’t be inviting non-Catholics for their input; as St. Paul said, “...what part hath the faithful with the unbeliever?” (2 Corinthians 6:15, Douay Rheims). The non-Catholic presence is necessary, because no serious Catholic would dare set foot in a synodal meeting which seeks to mock his faith, which explains why participation has been so abysmal.

Well, it would seem that Pope Francis hasn’t quite been able to take the hint, because yesterday, he announced that he would be extending the Sesame Street Synod to 2024. It’s no secret that the synodal process has been very slow over the last year, with roughly 1% of American Catholics getting involved, and many European countries reporting participation of less than 10%. However, according to Francis, even these laughable numbers are making the Synod move far too quickly.

“The fruits of the synodal process underway are many, but so that they might come to full maturity, it is necessary not to be in a rush,” Francis said.

If those numbers constitute moving too fast, I wonder what kind of numbers he was expecting. Count von Count admits that he doesn’t know what His Holiness is talking about, as he was in charge of counting the participants.

This synod is so ridiculous that even modernist laity aren’t showing up.

“Nobody was showing up, so instead I started counting Francis’s heresies,” Count von Count explained. “One, two, three, four, five, six, seven, eight - hey, I ran out of fingers!”

Elmo, the biggest Pope Francis fan in the world, as well as the only other person at the Synod, started to get upset that people were insulting his hero.

“You can’t say that Pope Francis is a heretic, because then you’re just a Protestant sedevacantist,” Elmo explained. “Elmo knows that it is impossible to be a real Catholic if you ever disagree with Pope Francis.”

Count von Count invited Oscar the Trad Grouch to the discussion, who then said “Francis is holding a synod with Protestants, and because I don’t want to join him, you’re calling me a Protestant?” Oscar then explained that he wasn’t a sedevacantist, because Canon Law clearly stipulates that the latae sententiae-excommunicated heretic validly (but illicitly) holds office until officially declared as excommunicated.

1.  Is prohibited from the right of electing, presenting, or appointing;

2.  Cannot obtain dignities, offices, benefices, ecclesiastical pensions, or other duties in the Church;

3.  Cannot be promoted to orders.

2. An act posited contrary to the prescription of § 1, nn. 1 and 2, however, is not null, unless it was posited by a banned excommunicate or by another excommunicate after a condemnatory or declaratory sentence; but if this sentence has been given, the one excommunicated cannot validly pursue any pontifical favor, unless in the pontifical rescript mention is made of the excommunication.

“Pope Francis has never said anything heretical, the Catholic Church was just wrong the whole time and he was correcting it,” Elmo explained. “While the sedevacantists are wrong about everything else, they’re at least right that the Pope is the rule of faith, even if the Church never taught that.”

When New Coke flopped back in 1985, they had to bring back the original formula in just three months. What a shame that the Vicars of Christ since Vatican II seem to have less wisdom than a soda company.

“The Pope does not have the right to change the Church’s doctrine, as Vatican 1, Session 4, Chapter 4, Part 6 defined,” Oscar responded. “Also, as St. Pius X explained in Ex Quo, the Church has no right to change the substance of the sacraments, which is what happened in the New Mass. So Francis is the one disobeying popes, and we’re obeying the popes by disobeying him.”

“Elmo doesn’t see any contradiction between the doctrines of Vatican II and those from before,” Elmo said. “You need to look at it in a hermeneutic of continuity in order to save face.”

“With bad theology like that, it’s no wonder nobody is coming to the Synod,” Count von Count chimed in. “One, two - two people at the Synod!”

“Elmo is very mad that Oscar the Trad Grouch and Count von Count came to the Synod on Synodality to make fun of Pope Francis,” Elmo screamed. “Oscar, you weren’t invited anyhow. But now, Count von Count is fired as the counter of Synod participants. Instead, Elmo will let Dominion Voting Systems count how many people showed up, and then tell Pope Francis the numbers.”

The fact that Francis won’t admit to one of the most embarrassing failures of his pontificate shows that he’s got something extra mischievous up his sleeve.

This synod is so ridiculous that even modernist laity aren’t showing up. If a church had no lay people coming, that parish would get shut down - which frequently happens in the post-Conciliar church. When New Coke flopped back in 1985, they had to bring back the original formula in just three months. What a shame that the Vicars of Christ since Vatican II seem to have less wisdom than a soda company, as they just won’t quit this Modernist Revolution.

The fact that Francis won’t admit to one of the most embarrassing failures of his pontificate shows that he’s got something extra mischievous up his sleeve. He knows his days are numbered, so perhaps he’s ramping up his modernism to cause as much havoc as he can before he dies. He needs an extra year of the Synod to buy more time to institute chaos within the Church. Ironically, if he thinks that traditionalists like Oscar are causing him problems, he can’t get mad at us, because we’re simply obeying his command to “Make a mess.” With an extra year added to the Synod, I have added a stanza to the revised Sesame Street Synod theme song I wrote in my last article.

Synodal Days,
Sweeping the trads away
On my way to kiss Pachamama’s feet
Can you tell me how to get
How to get to Synodality Street?

Go away
If you hold the true Faith
Latin Mass? I’d rather gnash my teeth!
Can you tell me how to get
How to get to Synodality Street?

New from RTV — NEOCONS & WARHAWKS: Can Anyone Stop the Democrat (War) Party?

[Comment Guidelines - Click to view]
The Remnant values the comments and input of our visitors. It’s no secret, however, that trolls exist, and trolls can do a lot of damage to a brand. Therefore, our comments are heavily monitored 24/7 by Remnant moderators around the country.  They have been instructed to remove demeaning, hostile, needlessly combative, racist, Christophobic comments, and streams not related to the storyline. Multiple comments from one person under a story are also discouraged. Capitalized sentences or comments will be removed (Internet shouting).
The Remnant comments sections are not designed for frequent personal blogging, on-going debates or theological or other disputes between commenters. Please understand that we pay our writers to defend The Remnant’s editorial positions. We thus acknowledge no moral obligation whatsoever to allow anyone and everyone to try to undermine our editorial policy and create a general nuisance on our website.  Therefore, Remnant moderators reserve the right to edit or remove comments, and comments do not necessarily represent the views of The Remnant.
back to top
Last modified on Monday, October 17, 2022
Tweet
More in this category: « Thrown Overboard Archbishop Chaput: Biden has excommunicated himself »