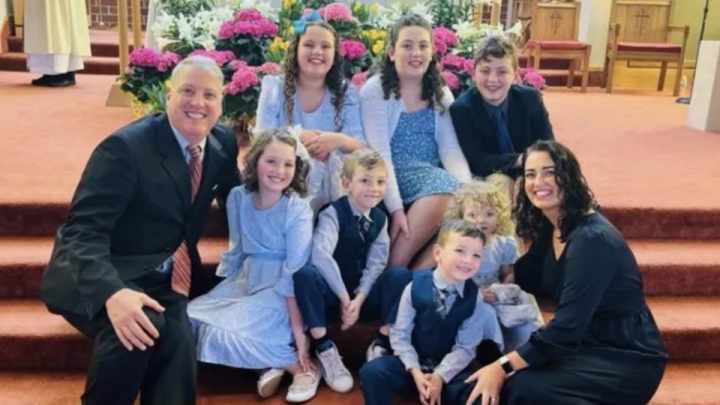 It was a first-degree miscarriage of justice that could be straight out of 1917 Bolshevik Russia or 1930s Nazi Germany. Rather, this most newsworthy story in late September 2022 from suburban Bucks County, Pennsylvania received modest national coverage.

Breaking the story was the intrepid LifeSiteNews as they vanquished the nation’s longstanding mainstream media that once again fails itself and the country by burying or simply ignoring such an egregious story in order to justify the unjustifiable.

As our nation’s porous southern border is being overrun, 48-year-old pro-life author and speaker Mark Houck, his wife and seven children had their home raided by over two dozen federal agents with guns drawn arriving in 15 vehicles on a Friday at seven in the morning.

Houck is also the co-founder and president of the nonprofit group “The King’s Men,” which promotes Christian virtues among men in 17 states and Europe.

Houck was charged with violation of the Freedom of Access to Clinic Entrances Act – a federal crime – for allegedly “… interfering with the right to seek, obtain or provide reproductive health services,” according to the Department of Justice (DOJ).

Considering the Houck case was dismissed by a federal judge only to be resurrected by the DOJ underscores how federal agencies have been weaponized against conservative Christians, pro-lifers, Trumpians, and those who question the wisdom of the CDC.

Houck stands accused of shoving a 72-year-old man who was an abortion escort at Planned Parenthood in Philadelphia last year after the man kept badgering Houck’s 12-year-old son at a prayer vigil by yelling obscenities at him. The case was thrown out by a Philadelphia federal judge this summer, but that failed to put an end to the issue as the DOJ opened a federal investigation on Houck.

This is how the Biden administration responds to a pro-lifer shoving an obscenity shouting pro-abort harassing his 12-year-old son trying to pray months after the fact. Houck is the one who should file a civil suit against the pro-abort for child endangerment.

If convicted, Houck is facing up to 11 years in federal prison, three years of supervised release, and fines of up to $350,000.  A simple request to appear would have sufficed but not for the Biden administration. The DOJ’s budget should be drastically cut wasting manpower and resources while growing their carbon footprint – 15 vehicles for one man?

Perhaps overlooked in this fiasco is how a president does not need congressional approval to conduct affairs at the DOJ. This is the same federal agency that will not provide security for Supreme Court Justices that do not adhere to the leftist abortion narrative.

Considering the Houck case was dismissed by a federal judge only to be resurrected by the DOJ underscores how federal agencies have been weaponized against conservative Christians, pro-lifers, Trumpians, and those who question the wisdom of the CDC.

A grand jury probe of the DOJ is long overdue.

The DOJ’s double standard with abortion is flagrant. Contrast the Houck case with the lack of arrests in the nationwide vandalism of many pro-life centers. It was a brute show of force to intimidate any opposition into submission and silence all who dare to challenge the left. The tactic is succeeding as the U.S. bishops and Cardinal Justin Rigali of Philadelphia remain silent.

Criminals are the new victims and conservatives, especially of the Christian variety, are the perpetrators.  With all the talk about democracy under peril and irrevocably broken, the American Kristallnacht has arrived and it is the Biden democrats leading the insurgency.

The Trump-Russia collusion was counterfeit as DOJ Inspector General Michael Horowitz noted how high-level FBI officials were involved in encouraging the accusations.  In his testimony to the House Intelligence Committee, Andrew McCabe said not one allegation in the Steele Dossier was verified. The only difference between Sanhedrin and the DOJ: the former lacked SWAT teams.

During the raid on Mar-a-Lago, Melania Trump’s closet revealed several items marked Victoria’s Secret. Perhaps the next raid should be at Hillary Clinton’s house to find evidence if Bill has ever slept there.  These raids accentuate what those new 87,000 IRS agents will be doing.

Holding the DOJ accountable for its abuse of their power is a must.

This is why the Founding Fathers understood the need for the Second Amendment.

A grand jury probe of the DOJ is long overdue.

This hideous prosecution of Houck should be the crossing of the Rubicon for everyone to vote out the totalitarian Democrats November 8th who are systematically destroying America.

Latest from RTV — THE GREAT RESIST: From Cardinal Müller to Giorgia Meloni & from Musk to Putin

[Comment Guidelines - Click to view]
The Remnant values the comments and input of our visitors. It’s no secret, however, that trolls exist, and trolls can do a lot of damage to a brand. Therefore, our comments are heavily monitored 24/7 by Remnant moderators around the country.  They have been instructed to remove demeaning, hostile, needlessly combative, racist, Christophobic comments, and streams not related to the storyline. Multiple comments from one person under a story are also discouraged. Capitalized sentences or comments will be removed (Internet shouting).
The Remnant comments sections are not designed for frequent personal blogging, on-going debates or theological or other disputes between commenters. Please understand that we pay our writers to defend The Remnant’s editorial positions. We thus acknowledge no moral obligation whatsoever to allow anyone and everyone to try to undermine our editorial policy and create a general nuisance on our website.  Therefore, Remnant moderators reserve the right to edit or remove comments, and comments do not necessarily represent the views of The Remnant.
back to top
Last modified on Monday, October 10, 2022
Tweet