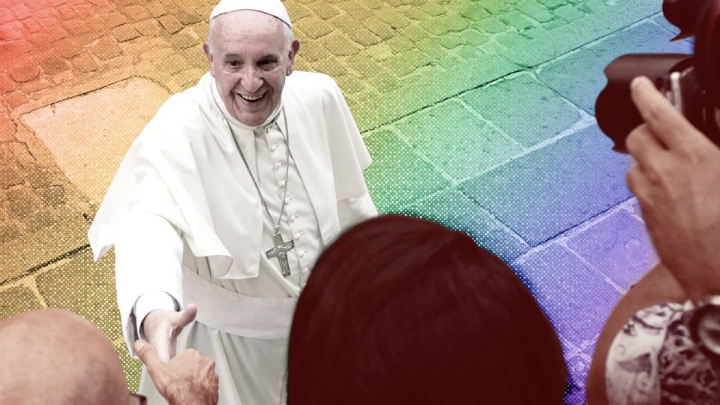 In June, the main architect of Australia’s Plenary Council, Archbishop Mark Coleridge of Brisbane, wrote for the website, Outreach, claiming that the need for the Church to become more inclusive is at the heart of both the Plenary and the global Synodal process, focusing on the Church’s apparent need to welcome members of the LGBTI community.

Before looking at the Archbishop’s article, it is worth spending a moment examining the context for his remarks. Outreach is the relatively new outlet for the work of dissident Jesuit priest, James Martin, well known for his promotion of the homosexual lifestyle among Catholics. The Outreach website contains the kind of articles to be expected from his ministry: “30 LGBTQ+ Religious Saints Throughout History” and “Amoris Laetitia and Gay Marriage” jostle for attention amongst the links to various pro-gay Catholic parishes around the US. In short, this apostolate is not a support for chaste Catholics struggling with same-sex attraction, but rather is meant for those who regard themselves as Catholics in good standing while flouting Church teaching by living out a homosexual lifestyle.

Having been thrust upon us by its doting Modernist creators, synodality takes its place among the multitude of weapons aimed at emasculating and perverting the Imago Dei.

The decision by Archbishop Coleridge to write for Outreach is consistent with his past opinions regarding same-sex relationships and also with his approach to the Plenary Council itself. When inaugurating the Plenary back in 2016, he said that the Plenary Council would focus on “becoming a more missionary Church”, hinting that the “critical issues of our day” including homosexual marriage, were likely to come up in discussions. In another clue to his agenda, Archbishop Coleridge said that the process of communal discernment (the term, “synodality,” was not in common use at that time) could prove to lead to a big shock for some. This “big shock” is certainly in Coleridge’s sights, since he believes that traditional Catholic paradigms need to be replaced by a Church he says will arise from a “new kind of apostolic imagination.”

In the Outreach article, Archbishop Coleridge points to the Pope’s sentiments in Fratelli Tutti, asking how in practical terms, we are to live as brothers and sisters. He opines that “what had seemed fixed points of reference are no longer as fixed as they seemed,” and suggests that cultural changes should prompt the Church to revisit Her long-held teachings in order to find a way forward regarding “inclusion” and “welcoming”.

The Archbishop goes on to point out three areas where Catholic teaching needs to be re-examined in light of modern preferences. The first of these is the distinction made by the Church between sin and sinner. Archbishop Coleridge says that the old norm of “hating the sin and loving the sinner” is no longer valid since modern man now believes that sexuality is an integral part of the human person and thus to hate the sin is to hate the person himself. He quotes the Catechism, reiterating a platitude that has become all too common among proponents of the new sexual morality: that it is damaging for a homosexual person hear the words “Intrinsically disordered” since they see this as as being applied to themselves personally, rather than to their inclinations.

The second issue Archbishop Coleridge brings up in his critiques is the relationship between a moral act and the person performing that act. He says that since Western cultures now look at morality as being  “grounded more in the person than the act, [and that] questions of personal intent and relational context are seen as decisive,” he believes that it is high time for the Church to re-evaluate Her black and white morality. He writes:

Here, Archbishop Coleridge contradicts himself by stating that an act does matter, but that its moral status is completely subjective. It appears that the Archbishop is violating a fundamental principle of Catholicism: that although a person may not be culpable for a particular act, the moral status of the act itself most certainly can and must be assessed.

Archbishop Coleridge has cast his lot with the growing number of dissenting bishops. These men and their representatives have been commenting with alarming regularity on the need for the Church to drop its prohibition on homosexuality.

Coleridge’s third point draws on Pope Francis’ encyclical Amoris Laetitia, bringing attention to the distinction between private pastoral care and the Church’s public position on sinful acts. He believes that, quoting another priest, “what the Church needs now is a new way of responding publicly to sin” so as not to appear hypocritical to the public. Obviously, any disparity between confessional and pulpit is due to the failure of priests to act in the best interests of their penitents, rather than a case of hypocrisy on the part of the Church. This point, however, seems lost on our prelates.

While Archbishop Coleridge correctly acknowledges that “all are called to chastity,” and also correctly points out that chastity is not the same as abstinence, his words become problematic when his audience is considered. Catholics who are same-sex attracted are in great need of encouragement to practise abstinence. It does nothing but damage their souls to hear the Archbishop’s highly ambiguous definition of chastity:  that it is “sexuality geared not to power and possession, but to self-sacrificing love,” without specifying that the physical expression of that love is only licit between a man and a woman within marriage.

By omitting the vital statement from the Catechism that homosexual acts can “under no circumstances be approved” (§2357), Archbishop Coleridge’s next sentence becomes disturbing, and possibly blasphemous: “It points to a redeemed, eucharistic sexuality, in which the lover says to the beloved, “This is my body given for you,” not “This is your body taken for me”.

His comments on the Redemption similarly verge on the blasphemous: the fact that Original Sin remains part of human existence after Christ’s sacrifice is abandoned here. An assumption is made that sanctified sexuality is a major hallmark of Christianity, whereas the Church teaches no such thing. As to the “inclusivity” of God, well, He Who created hell as an eternal home for the damned may not consider Himself very “inclusive.” From the Archbishop:

In the biblical story of the Fall, one of the prime symptoms of fallenness is darkened sexuality (Gen 3:7), which is why sexuality flooded with love’s light is one of the prime symptoms of Christ’s redemption. What does the redeemed life look like now? That question is at the heart of council and synod. We are now asking: How might we be as welcoming and inclusive as God?

The modern lie that God welcomes all without reference to repentance and conversion is therefore given credence by this highly influential bishop.

The remedy against his perversion is clear: it is the well-ordered masculinity of the traditional Mass.

Archbishop Coleridge’s claim that inclusivity is the main goal of the Plenary and Synods would surprise those who are working hard to encourage more Catholics to avail themselves of confession, to have faith in the Real Presence, to take their children to Mass regularly after they’ve made their First Communion, or to re-Catholicise diocesan schools. It would also be news to those who are concerned about serious infringements on the rights of Catholics, especially those under persecution in places like Nigeria and Nicaragua.

Rather than waxing eloquent on the welcoming nature of God, Archbishop Coleridge would be better employed in practising inclusion in his own Archdiocese. Those priests whom he rejected due to their vaccination status may well be asking why the Bishop’s open-arms policy does not apply to them.

Given his track-record of “taking the good” from same-sex relationships, and given the platform he has written for, James Martin’s Outreach, it is fairly clear that Archbishop Coleridge has cast his lot with the growing number of dissenting bishops. These men and their representatives have been commenting with alarming regularity on the need for the Church to drop its prohibition on homosexuality. Apart from heterodox German bishops, the South African Bishops’ Conference, the European Bishops Conference, the Swedish bishops and the Synod of Bishops in Rome have been promoting the rights of homosexual Catholics.  The Vatican’s “Synod on Synodality” website contains an entire section dedicated to LGBTI Catholics, which features a Dutch pro-LGBTI group and a British lesbian, as well as James Martin. All of this leads us to wonder whether the upcoming Synod will actually be a “synod on homosexuality”?

Some may find this too long a bow to draw, but phallus worship is a hallmark of many pagan religions. The increase in openly homosexual clerics and their ecclesiastical apparatchiks tracks fairly closely with the rise of pagan worship within the Church. How closely the two are linked may be the subject of speculation for some, but more realistically, is too abhorrent for most Catholics to consider.

Nevertheless, it appears that “synodality” is here to stay, at least within the mainstream Catholic Church. Having been thrust upon us by its doting Modernist creators, synodality takes its place among the multitude of weapons aimed at emasculating and perverting the Imago Dei.

The remedy against his perversion is clear: it is the well-ordered masculinity of the traditional Mass. Its suppression in some areas makes it difficult but not impossible for all Catholics to oppose the agenda which underlies synodality, however. Chastity, reparations and the devout life itself are the tools for following the Anti-Synodal Way and remain at the disposal of every Catholic of good will.

[Comment Guidelines - Click to view]
The Remnant values the comments and input of our visitors. It’s no secret, however, that trolls exist, and trolls can do a lot of damage to a brand. Therefore, our comments are heavily monitored 24/7 by Remnant moderators around the country.  They have been instructed to remove demeaning, hostile, needlessly combative, racist, Christophobic comments, and streams not related to the storyline. Multiple comments from one person under a story are also discouraged. Capitalized sentences or comments will be removed (Internet shouting).
The Remnant comments sections are not designed for frequent personal blogging, on-going debates or theological or other disputes between commenters. Please understand that we pay our writers to defend The Remnant’s editorial positions. We thus acknowledge no moral obligation whatsoever to allow anyone and everyone to try to undermine our editorial policy and create a general nuisance on our website.  Therefore, Remnant moderators reserve the right to edit or remove comments, and comments do not necessarily represent the views of The Remnant.
back to top
Last modified on Thursday, August 11, 2022
Tweet

More in this category: « Legislative Sleight of Words: the "Respect for Marriage Act" NYC Forced to Close Infant Vax Sites Due to "Lack of Demand" »