A Restoration of Hope 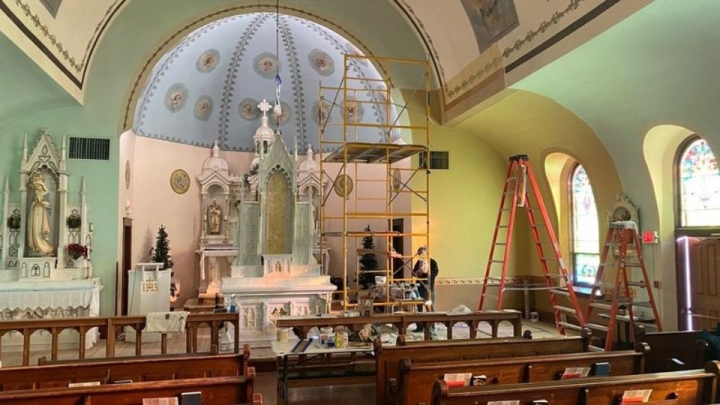 The seeds of restoration have been planted by the Immaculate Virgin in our midst.  Sometimes those seeds are hidden in the most unexpected of places.  The visual expression of a community’s heart, soul, and history can easily be forgotten or quietly erased.  This is not the case with the timely and ambitious restoration of the Immaculate Conception Church in Rapid City, South Dakota.  Now home to a thriving Parish that can trace its roots back to the initial ministry of Father Pierre Jean De Smet in the earliest days of the Catholic Church in the Dakota Territory in 1839.

When the territory became North and South Dakota, there was a single Diocese for the entire state of South Dakota.  The Catholic population grew quickly and by 1902 the Diocese of Sioux Falls was also split in two.  The city of Lead, SD become the See for the new Diocese.  Not too far away, Rapid City was quickly growing in industry and enterprise.  A modest white structure, St. Mary’s Catholic Church, was built there in 1882.  The congregation at St. Mary’s soon reached capacity and moved to a newly constructed Romanesque Revival building next door.  This rustic new structure had been commissioned for $25,000, and built out of indigenous, hand-cut sandstone.  St. Mary’s Immaculate Conception Church was dedicated in 1911.  This Church went on to become Immaculate Conception Cathedral when Rapid City became the See for the Diocese in 1930.  Growth continued; however, and so the sacred space had a relatively short run as the cathedral, lasting only until the move to another newly built cathedral in 1962.  From there, Immaculate Conception went mostly unused and was not home to a Parish for many years.

This changed in 1992 when the Priestly Fraternity of St. Peter (FSSP) began to offer the Traditional Latin Mass there.  Ultimately, the community was formally recognized as a Parish by the Diocese in 2014, remaining under the pastoral care of the FSSP.

Throughout their history at Immaculate Conception Church, the Parish has carefully maintained the now 114-year-old Romanesque Revival building.  Much generosity and hard work went to shoring up the infrastructure: a new roof, plexiglass overlays for the priceless stained-glass windows, complete renovation of the basement, and upgrades to the electrical and other systems.  It seemed that every time they would turn to restoring and beautifying the interior, something else had to take priority.

But in 2020 that changed.  The Parish created a revitalized restoration plan, found a new liturgical arts designer, and presented an updated plan to the Diocese.  This time, the focus would be on the interior of the Church, in full praise and glory to God.  And at what not a better time, than during a year that challenged people to rely on their faith amidst what was and is unprecedented times.  It is during these times of pause and reflection that restoration is made, we uncover the timeless beauty within, and those seeds planted by Our Lady flourish.  An apt metaphor embodied by the Immaculate Conception Church. 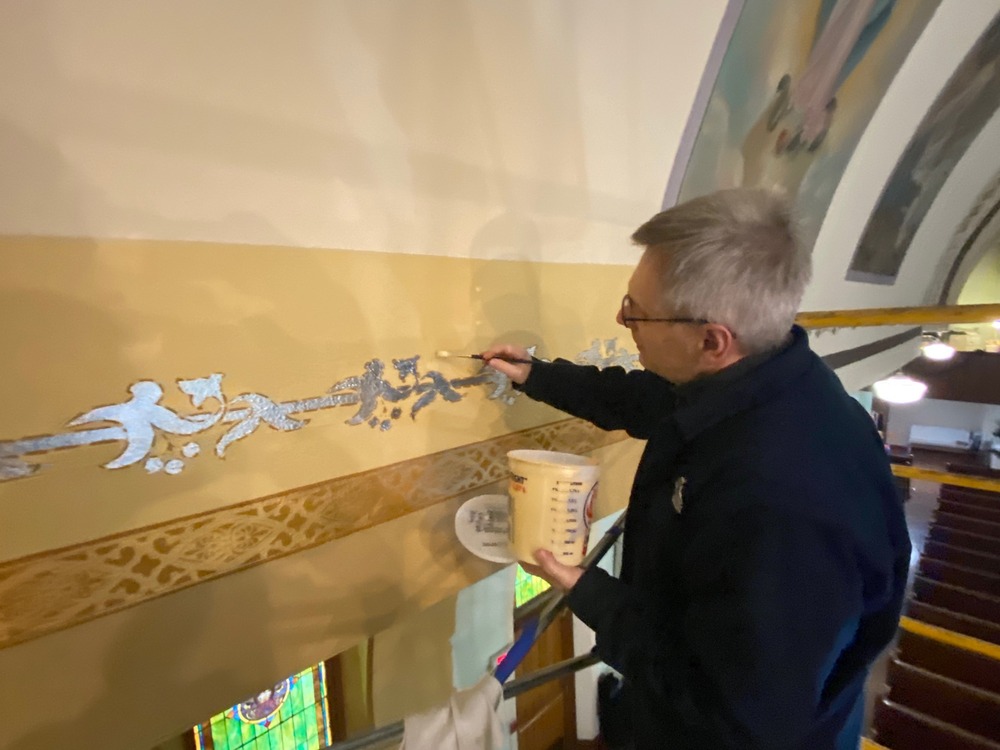 On the interior, past attempts to maintain the paint had resulted in a mismatch of styles and colors that failed to complement the stained-glass windows.  From the mint green on the nave walls to the wilted pink found in the Sanctuary, all efforts to harness the brilliance of the deep jewel tones of the exquisite stained-glass panels were lost.  However, further investigations uncovered a welcome find about what the interior once looked like.  Peeling back layers of old paint revealed a deep golden ochre color palette and original stencil designs.

During the dark months of 2020 and 2021, the Parish shared the sentiment that this restoration was much more than just applying a fresh coat of paint.  Their Pastor calls it “A Restoration of Hope.”  In the Sunday bulletin he explained his reasoning: “The Gospel can and should be enshrined in the buildings where we work and pray. Architecture is a sort of wordless form of Revelation that should lift our minds and souls to God and should act as a positive influence on the interior development of our souls.  Too often today meaningless and uninspiring forms are used. Too often art and architecture are plain ugly.  In renewing Immaculate Conception Church's art and architecture, we will broadcast to the world the good news that the Faith is still alive and well, and that the Tradition of the Church will be carried forward into the future. We will pass to the young ones of our parish a coherent and inspiring vision of what the Faith is:  The Truth that will never be erased from the world.”

A small pilot was conducted this past January to restore the St. Joseph side altar and to select the final color scheme and stencil patterns.  Now the Parish has resumed raising funds so that Phase 1 of the work can carry on without further delay.  Phase 1 addresses the beautification of the most sacred part of the church’s interior: the Sanctuary, where the Holy Sacrifice of the Mass is offered each day. 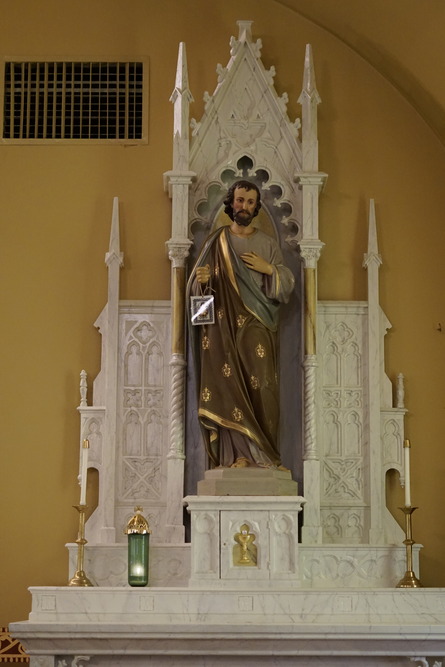 [Comment Guidelines - Click to view]
The Remnant values the comments and input of our visitors. It’s no secret, however, that trolls exist, and trolls can do a lot of damage to a brand. Therefore, our comments are heavily monitored 24/7 by Remnant moderators around the country.  They have been instructed to remove demeaning, hostile, needlessly combative, racist, Christophobic comments, and streams not related to the storyline. Multiple comments from one person under a story are also discouraged. Capitalized sentences or comments will be removed (Internet shouting).
The Remnant comments sections are not designed for frequent personal blogging, on-going debates or theological or other disputes between commenters. Please understand that we pay our writers to defend The Remnant’s editorial positions. We thus acknowledge no moral obligation whatsoever to allow anyone and everyone to try to undermine our editorial policy and create a general nuisance on our website.  Therefore, Remnant moderators reserve the right to edit or remove comments, and comments do not necessarily represent the views of The Remnant.
back to top
Last modified on Wednesday, March 2, 2022
Tweet
More in this category: « PROPAGANDA: Ukrainian National Breaks It Down POLICE BRUTALIZE PEACEFUL PROTESTERS: Lenten Penance in New Zealand »