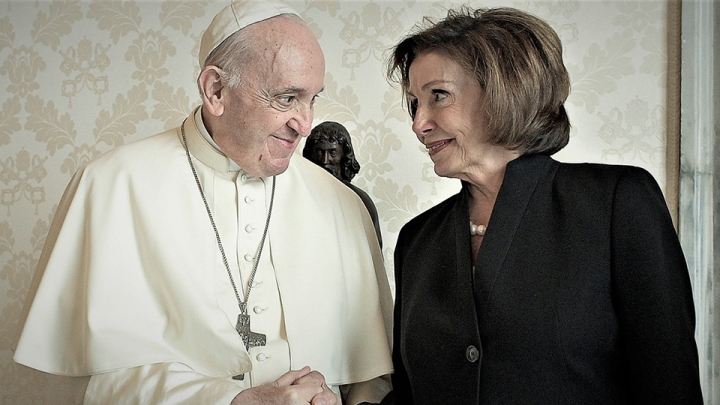 ON SATURDAY, OCTOBER 9, Pope Francis put on a very public performance with Speaker of the House Nancy Pelosi (D-CA). (https://www.breitbart.com/politics/2021/10/09/pope-francis-welcomes-nancy-pelosi-in-the-vatican/) Francis not only made time to meet with Pelosi—a courtesy he does not afford to Cardinal Zen. He also sat down with her in the papal office, smiling for the cameras rolling in the background. It was the papal equivalent of a political endorsement. All that was missing was the yard sign.

Nancy Pelosi went to Rome because she needed relief from the spiritual warfare working on her.

Why Pelosi, and why now? The answer explains everything you need to know about Jorge Bergoglio, his vindictive nature and devious schemes. It also explains what Newchurch is, and why Newchurch must be destroyed.

Nancy Pelosi went to Rome because she needed relief from the spiritual warfare working on her. She is swept up now in a tidal wave of prayers for her conversion, and Francis was trying to shield her from the spiritual blast. Archbishop Salvatore Cordileone (“lion-hearted”!) of San Francisco is leading a nationwide fasting campaign to soften Pelosi’s heart—this is the source of Pelosi’s extreme discomfort. (https://www.lifenews.com/2021/09/29/catholic-bishop-calls-for-massive-prayer-campaign-to-convert-nancy-pelosi/) Speaker Pelosi is on a mission to codify Roe v. Wade by means of a House bill and has been speaking enthusiastically in favor of dismembering children in the womb. Archbishop Cordileone is calling on Catholics to offer up their sufferings and to pray the Rosary for perhaps the most pro-abortion politician in American history, a woman who has spent her career in public office trying to increase “access” to globalism’s most potent and foundational sacrament.

Bergoglio met with the Speaker as a direct affront to Archbishop Cordileone and to all believing Catholics in the United States.

If the prayer campaign were to work—if Pelosi really were to have a conversion of heart—then the consequences for globalism would be dire. The population would not be controlled. The planet would suffer. Pachamama would be stirred to anger. Francis and his friends would suffer demonic wrath. By any means necessary, then, the good archbishop’s work must be thwarted. Child sacrifice must continue. No prayers, no sacrifices, and especially no Rosaries are going to stand in Bergoglio’s way.

Hence, Pelosi’s invitation to the Vatican. Bergoglio met with the Speaker as a direct affront to Archbishop Cordileone and to all believing Catholics in the United States (and around the world). Anyone who actually takes Church teachings seriously is a fool, Francis is pantomiming. Newchurch—the inversion of the Catholic Faith, the antichrist aping of Holy Mother Church—is precisely this charade in the papal offices with the real archbishop of San Francisco in Bergoglio’s book, Speaker of the House Nancy Pelosi. Francis is trolling Cordileone. Can anyone mistake the meaning of Francis’ gesture? “To hell with your prayers. We have the power now.”

Francis is a practiced liar.

That politicians who applaud abortion are welcomed at the Vatican by the pope himself remains scandalous, but those who are scandalized find themselves mocked by the hierarchy. (https://veritas-vincit-international.org/2019/08/14/sins-of-the-flesh/) Pro-abortion politicians—people who go in front of cameras and microphones and announce their support for abortion in front of the entire country on national television—are admitted to Holy Communion at Newchurch “masses” in the United States and in other dioceses around the world. It is, by contrast, the believers who are shunned. (https://cnsnews.com/article/national/michael-w-chapman/vatican-intervenes-urges-us-bishops-slow-down-policy-no) We who have committed “ecological sins” are chided and told to repent. (https://www.lifesitenews.com/news/pope-francis-proposes-adding-ecological-sin-against-common-home-to-catechism/) Whenever this becomes an issue, Francis invites another pro-abortion politician (https://www.bbc.com/news/world-latin-america-54980266) to the Vatican to drive the point home. (https://www.vaticannews.va/en/pope/news/2021-05/pope-francis-audience-argentina-president-alberto-fernandez.html)

Newchurch is not Catholic, it is the escape hatch from Catholicism. However much Newchurchers wish to undo the horrific effects of apostasy, they are stymied by the realities of their allegiances. I know so many Catholics who try mightily to remain in union with Rome, to pretend against all hope that Francis does not mean what he says or intend the clear import of what he does. These Catholics go to Newchurch “mass” after Newchurch “mass,” praying for Francis’ conversion as well as Pelosi’s. It is in vain. Newchurch is the sandbag that drags us all down into the abyss. There is no hope in Newchurch. Francis and Pelosi are the masters of Rome now. They seek the ruin of souls. The more we tell ourselves it must be otherwise, the more we back unwittingly into a peril we never imagined.

If Vatican II is as we now see it to be, a mockery of God and a clever undoing of the Magisterium, then nothing that came from it can be good for mankind. This is too terrible to contemplate, but the truth is there for anyone who cares to look at it.

What makes this apostasy even more shocking is that it is wreathed in pontifical lies. Francis is a practiced liar. His lying is, furthermore, qualitatively different from Pelosi’s. Nancy Pelosi is a politician, so, like all politicians, she lies strategically and compulsively. She lies out of convenience, because it helps her achieve and conceal the evil that she seeks to do, the illicit gains she wants for herself. Francis, however, lies out of conviction. He lies because he works for the father of lies. He proclaims to be against abortion, even calls it murder. (https://www.catholicnewsagency.com/news/249172/pope-francis-abortion-statements) But when there is the chance that “access” to the sacrament of globalism will be curtailed—as when, for example, a courageous American archbishop is leading a public prayer and fasting campaign for the conversion of a politician’s hardened heart—then Francis sabotages that good work and throws the Vatican’s support behind the embattled politician. (Francis also rails against “capitalism” and “neo-liberalism” in his low-information sermons, but was all smiles last Saturday with Pelosi’s husband, an investment mogul.) Newchurch is the escape hatch from Catholicism, and the Vatican is the black hole into which all good intentions by faithful Catholics disappear.

This is not at all to say that God is indifferent or does not hear our prayers. No prayer is ever wasted, no petition to Our Father goes unheard. But Newchurch is the systematic thwarting of the sensus fidei, the mocking and spurning of the desires of the faithful for help from the putative Church Militant. Francis does not work for God anymore. He has gone over to the other side. He has taken many bishops and clergy with him. Thinking, praying, with Newchurch is not thinking with the Church God founded in the spilled Blood and broken Flesh of His only begotten Son.

The die is cast. Catholics must choose between Pelosi and the saints, between Francis and the Eucharist.

That Flesh and Blood is at the one true Mass, the Mass of the ages handed down to us from our forefathers. They spilled their own blood time and again for the heritage which Francis, just this year, threw out with the trash. It is the Mass that is the thing. The critical battlefield is the Blood of the Lamb, which God pours out for His Church, and which Newchurch, God help us all, now knows not. God will not be mocked. If Vatican II is as we now see it to be, a mockery of God and a clever undoing of the Magisterium, then nothing that came from it can be good for mankind. This is too terrible to contemplate, but the truth is there for anyone who cares to look at it. For God’s sake, let us see what is staring us in the face. Newchurch is death, is lies, is the hopper into which fall the grains to be ground and cast into the flames.

I, too, have long tried to believe that the mirage was the real thing, that the Novus Ordo was God’s Mass. I have sat through every outrage at the altar, every infamy from the pulpit. I have read of the wonders of Martin Luther in the bulletin, have learned of special “LGBT Masses” offered by—of course—Jesuits in their lairs. I remember a Novus Ordo disgrace at which the priest put a giant yellow smiley-face on a pole and placed it before the altar, and then came out before “mass” to do a stand-up routine in which he asked us all to “have a nice day.” I have seen buffoons like him in other parishes, but I have also seen so many good priests in silent turmoil, torn between their faith in the Risen Christ and their loyalty to a city once ruled by Nero and Caligula. These men are silent heroes. They do everything in their humanly power to repair the breach. Nuns and monks, too, pray in silence, pray for the pope, pray that Newchurch might come around. The situation has become impossible, I’m afraid. Newchurch has gone beyond the event horizon. There is no helping it now. We follow Newchurch into our own doom.

Child sacrifice must continue. No prayers, no sacrifices, and especially no Rosaries are going to stand in Bergoglio’s way.

This year, the year of grace two thousand and twenty-one, the Roman pontiff assembled the elements for critical mass. He pitted Newchurch against the real Church, the Novus Ordo against the Mass of ages. One or the other will win out. There will not be both left standing. The die is cast. Catholics must choose between Pelosi and the saints, between Francis and the Eucharist. God help us all, that is the lay of the land. There will be a critical mass. One side or the other will gain the momentum and then the moment of truth.

Francis has made his move. He has made the escape hatch from Catholicism into what he hopes will be Catholicism’s tomb. He has turned the whitewashed sepulcher into the altar for Novus Ordo. Catholicism is buried, Pelosi is crowned, globalism is triumphant, Pachamama be praised, woe to the infant who must be sacrificed to quell the goddess’ wrath. Archbishop Cordileone tries now what no man can achieve. No human being can bridge the chasm separating evil from good, the lie from the truth.

The critical Mass is the thing. On this we live or die. The road forks at Francis, and the choice before us is clear. In a hermeneutic of discontinuity, by the lying pontiff’s own sophistry, we are shown the way to salvation as at no time since Vatican II.

Which will you choose, my brothers and sisters in Christ?

[Comment Guidelines - Click to view]
The Remnant values the comments and input of our visitors. It’s no secret, however, that trolls exist, and trolls can do a lot of damage to a brand. Therefore, our comments are heavily monitored 24/7 by Remnant moderators around the country.  They have been instructed to remove demeaning, hostile, needlessly combative, racist, Christophobic comments, and streams not related to the storyline. Multiple comments from one person under a story are also discouraged. Capitalized sentences or comments will be removed (Internet shouting).
The Remnant comments sections are not designed for frequent personal blogging, on-going debates or theological or other disputes between commenters. Please understand that we pay our writers to defend The Remnant’s editorial positions. We thus acknowledge no moral obligation whatsoever to allow anyone and everyone to try to undermine our editorial policy and create a general nuisance on our website.  Therefore, Remnant moderators reserve the right to edit or remove comments, and comments do not necessarily represent the views of The Remnant.
back to top
Last modified on Tuesday, October 12, 2021
Tweet

More in this category: « Mayor of Grants, NM, to Consecrate City to Jesus, Mary and Joseph YouTube's Blatant Harassment of Remnant TV Continues »