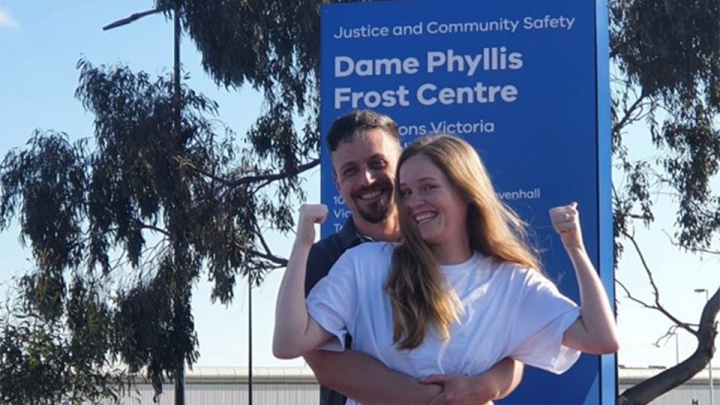 Monica Smit has been released from prison after 22 days in isolation. Monica had initially chosen to remain in custody after the courts tried to impose unreasonable bail conditions when she was arrested on charges of incitement. Those charges relate to two anti-lockdown protests which took place in August during Melbourne’s extended lockdown.

Justice Elizabeth Hollingworth, of the Melbourne Supreme Court, yesterday told the courts that she agreed Monica’s bail conditions were too onerous and that she was concerned they were being used to silence Monica. The young founder of Reignite Democracy Australia had been extremely successful in organising a grassroots resistance to the draconian restrictions that have been imposed throughout Australia by governments in response to the coronavirus.

Anti-lockdown and anti-mandatory vaccination protests are still being held in the city, with violent clashes between police and demonstrators becoming a daily occurrence.

The prosecution argued that extreme bail conditions, such as shutting down the RDA website and social media accounts, were necessary since it believed they are “vehicles for incitement.” But Monica’s lawyer, Peter Chadwick QC, said this amounted to censorship and was not the purpose of bail.

Monica’s Supreme Court hearing was watched by over 6000 members of the public, even though her case has not been widely reported by the mainstream media.

Anti-lockdown and anti-mandatory vaccination protests are still being held in the city, with violent clashes between police and demonstrators becoming a daily occurrence. Police have regularly been using rubber bullets and pepper spray against citizens who are frustrated with both the economic impact of extended lockdowns and vaccination being imposed by state governments as a condition of employment and travel. A freak earthquake that took place just before Monica’s hearing was taken by many - believers and unbelievers - to be a sign that something is deeply wrong with the direction in which Australia is heading.

Monica will return to court in November to face her incitement charges. We must continue to hope and pray that justice will be served in Monica’s case and that our elected leaders will come to their senses: they must come to realise that the globalist agenda promises only tyranny and destruction.

[Comment Guidelines - Click to view]
The Remnant values the comments and input of our visitors. It’s no secret, however, that trolls exist, and trolls can do a lot of damage to a brand. Therefore, our comments are heavily monitored 24/7 by Remnant moderators around the country.  They have been instructed to remove demeaning, hostile, needlessly combative, racist, Christophobic comments, and streams not related to the storyline. Multiple comments from one person under a story are also discouraged. Capitalized sentences or comments will be removed (Internet shouting).
The Remnant comments sections are not designed for frequent personal blogging, on-going debates or theological or other disputes between commenters. Please understand that we pay our writers to defend The Remnant’s editorial positions. We thus acknowledge no moral obligation whatsoever to allow anyone and everyone to try to undermine our editorial policy and create a general nuisance on our website.  Therefore, Remnant moderators reserve the right to edit or remove comments, and comments do not necessarily represent the views of The Remnant.
back to top
Last modified on Wednesday, September 22, 2021
Tweet

More in this category: « Nightmare in Australia: The Updates Your Cheat Sheet to Win Every COVID Argument »