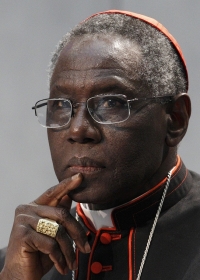 I had a telephone conversation with His Eminence, Cardinal Sarah. The call was recorded and lasted 6 minutes and 25 seconds.

Regarding the text of the Appeal, the Cardinal said: “It seems to me a very serious matter. I think that this Appeal will do much good, because it will make us reflect and take a position: I agree that it should be published as soon as possible.”

I then asked His Eminence if he intended to sign it. The Cardinal replied: “Yes, I agree to put my name to it, because this is a fight that we must engage in together, not only for the Catholic Church but for all mankind.”

At 8:43 a.m. I telephoned His Eminence, to ask him if he had a telephone number for Cardinal Gerhard Ludwig Mueller, which he later kindly sent to me by SMS. During this telephone call, which lasted 4 minutes, Cardinal Sarah made no reference to his wish to withdraw his signature.

At 3:00 p.m. I began to send out the text of the Appeal with the list of signatories, including Cardinal Sarah, to press agencies, blogs and various newspapers.

At 5:48 p.m. I received a text message from the Cardinal, but only became aware of it about an hour and a half later. At the time the message was sent, I was totally absorbed in the work of disseminating the Appeal and I did not see the arrival of His Eminence’s message and therefore was not able immediately to become aware of its contents.

At 7:37 p.m. the Cardinal telephoned me asking if I had seen his message. I said no.

This is the text of the message sent to me by the Cardinal: “Dearest Excellency, as I am still working in the Roman Curia, some friends of mine advised me not to sign your proposed Appeal. Perhaps it would be better to remove my name this time. I am very sorry. You know my friendship and my closeness to you. Thank you for your understanding. Robert Card. Sarah.”

The cardinal informed me in his telephone call that he intended to remove his name from the list of signatories. I was terribly sorry and pointed out to His Eminence that the Appeal and the signatures had already been circulated “universally” for more than four hours. The conversation ended without His Eminence requesting or suggesting any solution.

One could, for example, have agreed on a “joint statement” in which the Cardinal’s decision to withdraw his signature was made public. None of this was done. We cordially said goodbye expressing our esteem and mutual support. Faced with this de facto situation, to which neither he nor I were able to find a solution, I took the liberty of encouraging His Eminence, pointing out to him how much his support of the Appeal would be of comfort and encouragement to a great many faithful.

With surprise and deep regret, I then learned that His Eminence had used his twitter account, without giving me any notice, to make statements that cause serious harm to the truth and to my person.

I am very sorry that this matter, which is due to human weakness, and for which I bear no resentment towards the person who caused it, has distracted our attention from what must seriously concern us at this dramatic moment.

I confirm that the name of His Eminence Cardinal Robert Sarah has been promptly removed from the official website of the Appeal, as can be seen at: www.veritasliberabitvos.info.

[Comment Guidelines - Click to view]
The Remnant values the comments and input of our visitors. It’s no secret, however, that trolls exist, and trolls can do a lot of damage to a brand. Therefore, our comments are heavily monitored 24/7 by Remnant moderators around the country.  They have been instructed to remove demeaning, hostile, needlessly combative, racist, Christophobic comments, and streams not related to the storyline. Multiple comments from one person under a story are also discouraged. Capitalized sentences or comments will be removed (Internet shouting).
The Remnant comments sections are not designed for frequent personal blogging, on-going debates or theological or other disputes between commenters. Please understand that we pay our writers to defend The Remnant’s editorial positions. We thus acknowledge no moral obligation whatsoever to allow anyone and everyone to try to undermine our editorial policy and create a general nuisance on our website.  Therefore, Remnant moderators reserve the right to edit or remove comments, and comments do not necessarily represent the views of The Remnant.
back to top
Last modified on Friday, May 8, 2020
Tweet

More in this category: « COVID CHAOS: Dr. John Rao Nails It Christendom College to Reopen in the Fall Without Federal Bailouts »