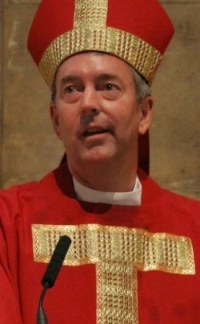 The coronavirus crisis—to whatever extent real or exaggerated—seems, as with all crises, to be bringing out the best and the worst in people.

Unfortunately, with a few exceptions like Bishop Strickland, it seems to be bringing out the worst in our bishops. The Catholic world is moving day by day into a growing sacramental blackout that includes not only suspension of public Masses and Holy Communion, but also suspension of baptisms, confessions, and—most appallingly, given the dangers faced by the elderly and the sick—extreme unction. (In these circumstances, calling it “anointing of the sick” would seem almost quaint; if people on death’s door, in extremis, no longer count as candidates, a fortiori the gravely ill don’t make the cut, either.)

The suspension of large gatherings (including public masses) is quite understandable. But the other measures are abusive, and a sign of the complete disregard of these wolves who pretend to be shepherds for the souls of the faithful. But the act of many, apparently most, bishops to close churches to simple individual prayer in front of the Blessed Sacrament? And, much worse, to “ban” confessions in the time of greatest need? To “ban” last rites, including the viaticum and extreme unction in the time of greatest peril?

What is the point of the Church at all, of the priesthood, if these physicians of the soul abandon the sick right now? How come Francis mentioned the church as a “field hospital” from day one of his pontificate, and, when the need for actual field hospitals is here, priests and bishops simply do not show up? Do they have to despise the laity that much? THIS is clericalism of the worst kind. Note this, bishops who have “banned” confessions and last rites in this time: WE WILL NOT FORGET THAT YOU ABANDONED US IN THE MOMENT OF GREATEST NEED.

Reflecting on the situation, I arrive at the following hypothesis.

Isn’t it obvious that the reason the bishops don’t want their clergy out there “smelling like the sheep” in the “field hospital” (etc.) is because most of the clergy in positions of power are older—precisely the “Spirit of Vatican II” generation—and more vulnerable to being killed off by the virus? They know that as soon as the younger clergy take over, the revolution’s days are numbered. The natural fear of death has been pervaded and compounded by the fear of a catastrophic institutional death, the demise of the project to which several generations have committed themselves, for their own advancement and for the dissolution of traditional Catholicism. Thus, the sacramental interdict is a perfect reflection of their fear of change... the change that is coming, whether they want it or not.

We saw recently with Prof. Andrea Grillo’s protest against the CDF decrees that the liturgical progressives are up in arms about the normalization of traditionalism. They were happier when it was marginalized (dare one say quarantined?) among the SSPX, or when groups like the FSSP or the ICRSS “contained” the evil, so to speak, in ghettoes. But now that younger diocesan priests and seminarians are learning it on the sly and offering it whenever they can get away with it, the liberals are turning pale and losing their lunches.

A traditional priest—the one who baptized my children—once said to me: “The bishops fear the old Mass more than they fear the devil himself.” (To which the rejoinder is ready to hand: “They don’t believe in the devil, so what do you expect?” But perhaps some of them still do… Pope Francis seems to believe in the devil, as the conservatives never cease to remind us—as if we are supposed to be impressed that any Jesuit still does.) I think we have to bear this intensity of fear in mind when trying to understand what looks like an irrational opposition to the old Mass on the part of the hierarchy. It’s actually quite rational, from their point of view: they see it, and everything that goes along with it, as the antithesis of the post-Vatican II Catholic religion, such as it is. And, in spite of 50 years of (mostly American) conservatives trying to show that there’s really no conflict at all if you just squint hard enough, we can say, candidly, that the bishops are quite right to think that the old Mass brings with it a totally different way of believing and living as Catholics.

And now comes this, as if to verify the hypothesis: a memorandum or “clarification” from Bishop Peter Christensen, Bishop of Boise, dated February 28 but published only in the latest edition (March 27–April 9) of the Idaho Catholic Register. It has already gained quite a bit of notoriety for being quite possibly the most in-your-face liturgical slapdown we have seen since Pope Francis embarrassed Cardinal Sarah on the world stage after the London Sacra Liturgia conference in July 2016.

His Excellency wastes no time in getting right to his points, which can be summed up as follows.

Such a heady mixture of despotic heavy-handedness, twitching anxiety, and theological ineptitude has rarely been seen in recent years. Each point deserves some commentary.

Perhaps the most disgusting aspect of all is that the Idaho Catholic Register published, on the same page, a sickeningly sycophantic letter “from one of the priests” gushing over the memo. It’s a letter that bears all the telltale signs of having been constructed for the purpose, like fan mail sent in to Pravda. The million dollar line: “So many of us joyfully celebrate with the Spirit of Vatican II, and people really do participate!” (You just couldn’t make this stuff up.) A source close to the situation and well-informed tells me that not more than 60% of the clergy over 40, and nearly none of the priests under 40, would be able to agree with this piece of fan mail.

A bishop who is capable of writing a “clarification” like this is no longer in communion with historic, dogmatic, liturgical Catholicism. I guess it is always a useful “clarification” to learn who are the Catholics and who are the company men committed to the conciliar project at all costs—even at the cost of the enthusiasm, zeal, and piety of their own best young priests and seminarians. My heart goes out to the clergy who must slave under a Pharaoh “who knew not Joseph” (Ratzinger, that is), and who are being asked to labor in the salt mines of Montini. May God grant them grace to discover and exercise their rights as Catholics and as priests, being gentle as doves and wise as serpents. Now, if ever, is the time for an underground Church to form and flourish.

As before with Prof. Grillo, the situation in Boise prompted me to write several limericks for the record:

A Clarification of Limericks
By Peter Kwasniewski

As to media, warnings are thundered:
“If you read NLM, you have blundered!
The blogosphere traddy
Has made you all batty—
Roman coffers are NOT to be plundered!”

“Rid the church of its harmful prie-dieus!
Make presiders gaze out to the pews!”
Thus the prelate in Boise,
who’s regrettably noisy
About just what his clergy may choose.

How disturbing it is to be told:
“You can’t offer the great Mass of old
Except if you wish
To report to the Bish
All the details His Grace has cajoled.”

One would think, with the plague all around us,
That a shepherd would not try to hound us:
“Don’t get down on your kneeses
(I don’t care if it’s Jesus!)”—
When we know a true father would ground us.

[Comment Guidelines - Click to view]
The Remnant values the comments and input of our visitors. It’s no secret, however, that trolls exist, and trolls can do a lot of damage to a brand. Therefore, our comments are heavily monitored 24/7 by Remnant moderators around the country.  They have been instructed to remove demeaning, hostile, needlessly combative, racist, Christophobic comments, and streams not related to the storyline. Multiple comments from one person under a story are also discouraged. Capitalized sentences or comments will be removed (Internet shouting).
The Remnant comments sections are not designed for frequent personal blogging, on-going debates or theological or other disputes between commenters. Please understand that we pay our writers to defend The Remnant’s editorial positions. We thus acknowledge no moral obligation whatsoever to allow anyone and everyone to try to undermine our editorial policy and create a general nuisance on our website.  Therefore, Remnant moderators reserve the right to edit or remove comments, and comments do not necessarily represent the views of The Remnant.
back to top
Last modified on Friday, April 3, 2020
Tweet