The “Ninth Crusade” of the Papal Zouaves

This year marks the 150th anniversary of the end of the Papal States, which occurred on September 20, 1870, with the military invasion of Rome by the Italian army. Pius IX (1846-1878) did not condescend to this violence and ordered an armed resistance that was limited to the first shedding of blood. The Papal Zouaves were the primary troops engaged in this resistance that was supposed to demonstrate that the pope yielded only when faced with a preponderance of enemy forces. Thus there concluded an epic that had lasted ten years, that may be called “The Ninth Crusade” after the eight celebrated medieval Crusades.

La nona crociata: I volontari di Pio IX in difesa di Roma [The Ninth Crusade: The Volunteers of Pius IX in Defense of Rome], is the title of a book by Piero Raggi (Libreria Tonini, Ravenna 2002). Raggi is a scholar who has gathered a great quantity of biographical and iconographical material in order to preserve for memory the names of those who defended the Church and the Pope in the decade stretching from 1860 to the breach of the Porta Pia on September 20, 1870.

In 1860, with the support of Count Cavour and the British government, Giuseppe Garibaldi was preparing his “Expedition of the Thousand” to conquer the Kingdom of the Two Sicilies. In the same year, Pius IX entrusted the armed defense of the Papal States to Monsignor Francesco Saverio de Mérode (1820-1874), who came from a distinguished Belgian family and had been an official of the Foreign Legion in Algeria before following his religious vocation. Msgr. de Merode created a corps of French and Belgian volunteers to serve alongside the reuglar papal troops. He placed these volunteers under the authority of General Christophe de Lamoricière (1805-1865), who had commanded the corps of Zhouaves in Africa, and so in his honor the corps of “Franco-Belgian Riflemen” came to be known as the “Papal Zouaves.”

General Lamoricière launched an appeal to young Catholics all over the world, who responded generously to the call to arms in defense of Pius IX. The volunteers came from 25 different countries, but the majority came from two Catholic countries, Austria and Ireland. Many others came from England, Poland, Switzerland, Germany, Holland, Canada, and the United States... 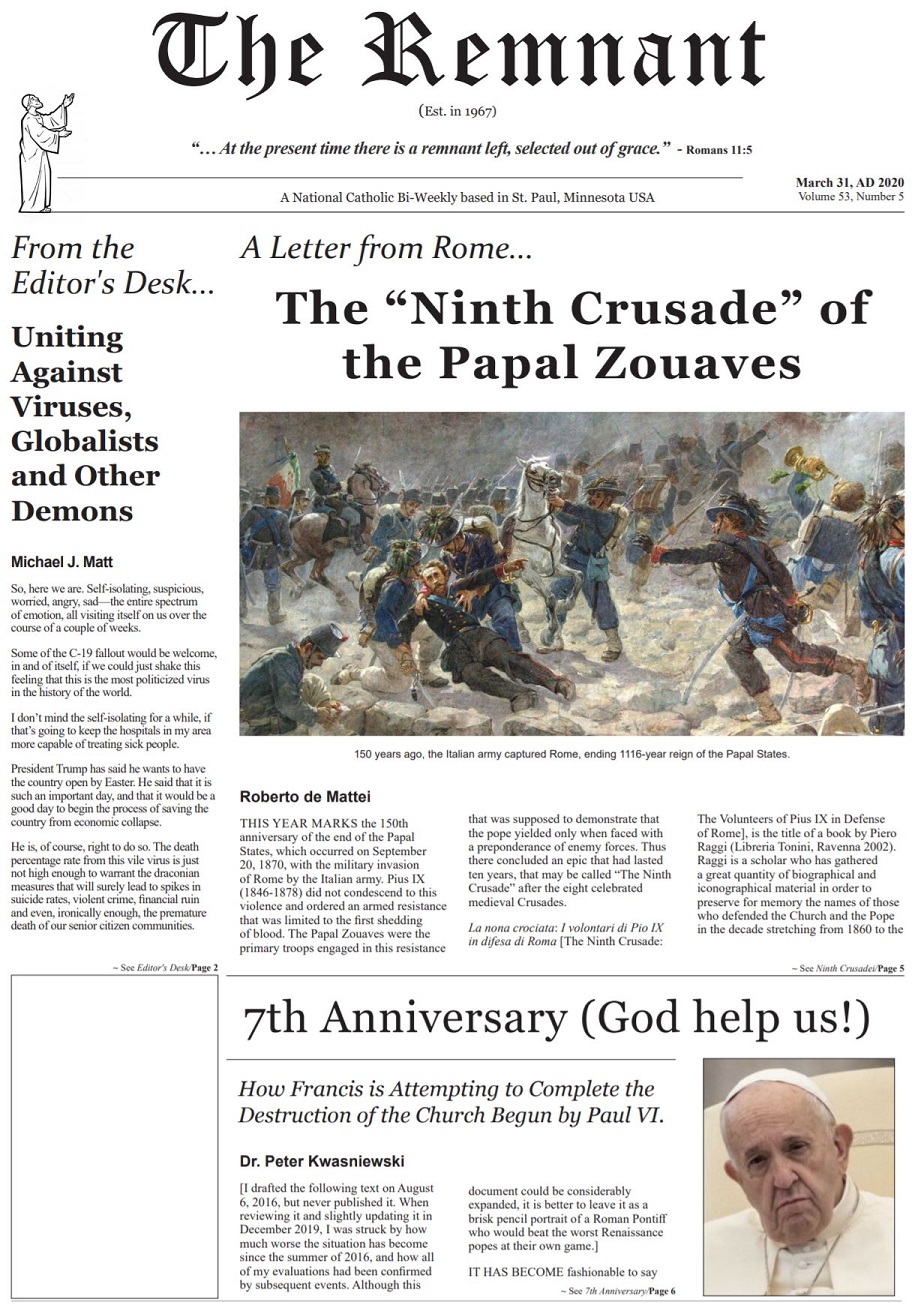 [Comment Guidelines - Click to view]
The Remnant values the comments and input of our visitors. It’s no secret, however, that trolls exist, and trolls can do a lot of damage to a brand. Therefore, our comments are heavily monitored 24/7 by Remnant moderators around the country.  They have been instructed to remove demeaning, hostile, needlessly combative, racist, Christophobic comments, and streams not related to the storyline. Multiple comments from one person under a story are also discouraged. Capitalized sentences or comments will be removed (Internet shouting).
The Remnant comments sections are not designed for frequent personal blogging, on-going debates or theological or other disputes between commenters. Please understand that we pay our writers to defend The Remnant’s editorial positions. We thus acknowledge no moral obligation whatsoever to allow anyone and everyone to try to undermine our editorial policy and create a general nuisance on our website.  Therefore, Remnant moderators reserve the right to edit or remove comments, and comments do not necessarily represent the views of The Remnant.
back to top
Last modified on Friday, April 3, 2020
Tweet
More in this category: « “Cancel the Decrees!”: High Dudgeon from Progressive Liturgists AD ORIENTEM BANNED: Bishop of Boise Makes Revolution Official »