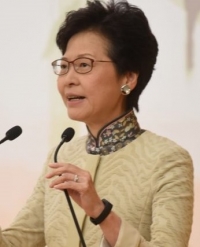 What is happening in Hong Kong in this troubled first part of the year 2019? It would be easy, perhaps, to put the responsibility on China's shoulders without understanding the profound reasons that lead to this current deadlock.

You know the story: a woman is killed in Taiwan by her Hong Kong boyfriend, who manages to escape to her city where he was arrested for other crimes. This episode had inspired the chief executive of Hong Kong, the Catholic Carrie Lam, to propose an extradition law that allows the delivery of "criminals" not only to Taiwan, but also to Macau and, above all, to mainland China.

It is not difficult to understand that this fact has made the people of Hong Kong extremely nervous, because they see in this law a perpetual sword of Damocles on their heads. Let us not forget that Hong Kong was and is a refuge for those who fled and flee persecution of various kinds in mainland China, sometimes for ideological reasons. And now? What will happen to them?

If you think that only criminals should worry, you are deluded. In fact, we should first understand the concept of "criminal", that in China includes those who criticize the government or the party and its leaders or those who ask to profess religion regardless of state control.

In short, who is safe?

The protests resulted in a march on Sunday, June 9, which was attended by a flood of people. I have talked to many people these days that I am in Hong Kong and still have not been able to find anyone favorable to this law. Yet the local government assures us that they have a broad consensus.

But Carrie Lam, who cried a few days ago on television during an interview recalling how the people of Hong Kong accuse her of having sold off the city, now seems to face difficult choices, as her bill (she assured that China has not asked her to introduce this extradition law) has brought the city to the brink of revolt. A revolt dictated by social conditions exacerbated by a real estate market with unreachable prices that makes the lives of many families precarious, from a leadership that responds to a central government from which the typical Hong Kong Chinese feel a stranger.

As someone told me, there was never democracy in Hong Kong, but there was freedom. The suffocating control that exists in mainland China is certainly scary.

On Saturday, June 15, Carrie Lam in a press conference put the bill on hold, acknowledging the huge turmoil that this proposal has caused. This probably has come also from divisions inside the pro establishment camp, because obviously the reaction of people was furious and protests are not going to stop.

Sunday 16 and Monday 17, other events are scheduled and the presence of the police is indeed much more pervasive these days. Already there have been clashes between protesters and the police, but there is a fear of a possible massacre if the situation will be more exacerbated.

In the Catholic Church there are some who openly take sides with the protesting population, but in general there is prudence, even considering that this diocese has had no titular bishop for 6 months. But this will be another interesting story to tell in another article.

Among the most active alongside the protesters are Cardinal Joseph Zen and Auxiliary Bishop Joseph Ha, who remained in the city to assist spiritually and concretely those who struggle to defend their rights and dignity, the dignity of those who do not want to see the city where they were born and lived to become a place of instability and terror.

[Comment Guidelines - Click to view]
The Remnant values the comments and input of our visitors. It’s no secret, however, that trolls exist, and trolls can do a lot of damage to a brand. Therefore, our comments are heavily monitored 24/7 by Remnant moderators around the country.  They have been instructed to remove demeaning, hostile, needlessly combative, racist, Christophobic comments, and streams not related to the storyline. Multiple comments from one person under a story are also discouraged. Capitalized sentences or comments will be removed (Internet shouting).
The Remnant comments sections are not designed for frequent personal blogging, on-going debates or theological or other disputes between commenters. Please understand that we pay our writers to defend The Remnant’s editorial positions. We thus acknowledge no moral obligation whatsoever to allow anyone and everyone to try to undermine our editorial policy and create a general nuisance on our website.  Therefore, Remnant moderators reserve the right to edit or remove comments, and comments do not necessarily represent the views of The Remnant.
back to top
Last modified on Friday, June 21, 2019
Tweet
More in this category: « PIONEER TRADITIONALIST PRIEST DIES: Msgr. Raymond Ruscitto, RIP AMAZON SYNOD: Vatican Racism on Full Display »